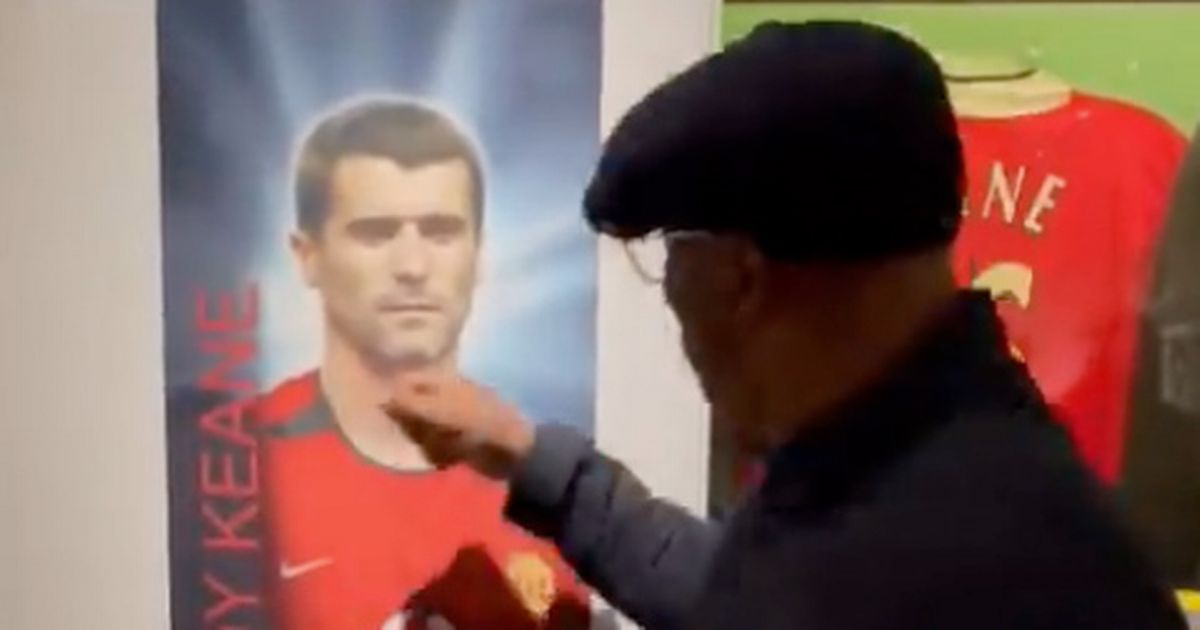 Wright, 58, and Keane, 50, faced off in many a feisty Premier League encounter during their playing days as the rivalry between the Gunners and United escalated in the ’90s.

They have since joined forces on television having forged successful careers in punditry, working alongside each other in the ITV Sport studio to cover international fixtures including Euro 2020 last summer.

But Wright was keen to remind the Irishman of their old rivalry as he walked around Old Trafford on Monday.

The ex-England international wandered past posters commemorating the United legends of old such as Sir Bobby Charlton and Tommy Taylor.

Who is your favourite television pundit? Have your say in the comments!

Ian Wright turned to the camera and paused with a grin
(

In a video posted on his Instagram story, Wright then notices some memorabilia from Keane’s playing career before arriving at the poster dedicated to the former Red Devils skipper.

After a brief pause to look directly at the camera, he aimed a light punch at the picture of his former adversary, connecting on the mouth.

It served as a reminder that Wright has not forgotten he was once bitter enemies with Keane as Arsenal and United grappled for the league title in the late ’90s.

He discussed their past animosity earlier this month while covering the Gunners’ FA Cup clash against Nottingham Forest.

“That’s the thing, we can stand here and chat and have a laugh… but I can’t tell you how much I disliked Roy back in the day,” Wright said on ITV Sport.

“They (United) were so good, it was so hard to beat them. But you can’t beat those games.

“I was watching one the other day with Gary Neville, it was an amazing game.”

Despite their deep-set hostility from years gone by, the two colleagues appear to have put their differences behind them since they began analysing matches together.

Wright tells an amusing story of how he was once arrived late for a lunch with Keane only to find his friend had grown tired of waiting for him.

“Honestly, I’ve got so much admiration for Roy Keane,” Wright told BBC’s Match of the Day Top 10 podcast. “I have to say, we were at the World Cup together [as pundits] and I was thinking, ‘oh my gosh, we’re really cool mates, it’s fine’.

“And I remember there was this one time I asked Roy if he wanted to go to lunch, because we had breakfast then we’d go for lunch.

Ian Wright and Roy Keane have struck up a friendship since hanging up their boots
(
Advertisement. Scroll to continue reading.

“I laughed because I thought he was only messing about but he said, ‘Wrighty, I’m not coming’. And he hung up the phone. And I never saw him until the evening.”

Keane has since recalled the incident from his perspective and took issue with one major aspect of Wright’s account.

He told Micah Richards & Roy Keane’s Road to Wembley: “I know Wrighty gives his version of the story. [In] his version he was five minutes late – he was [actually] 35 minutes late!”