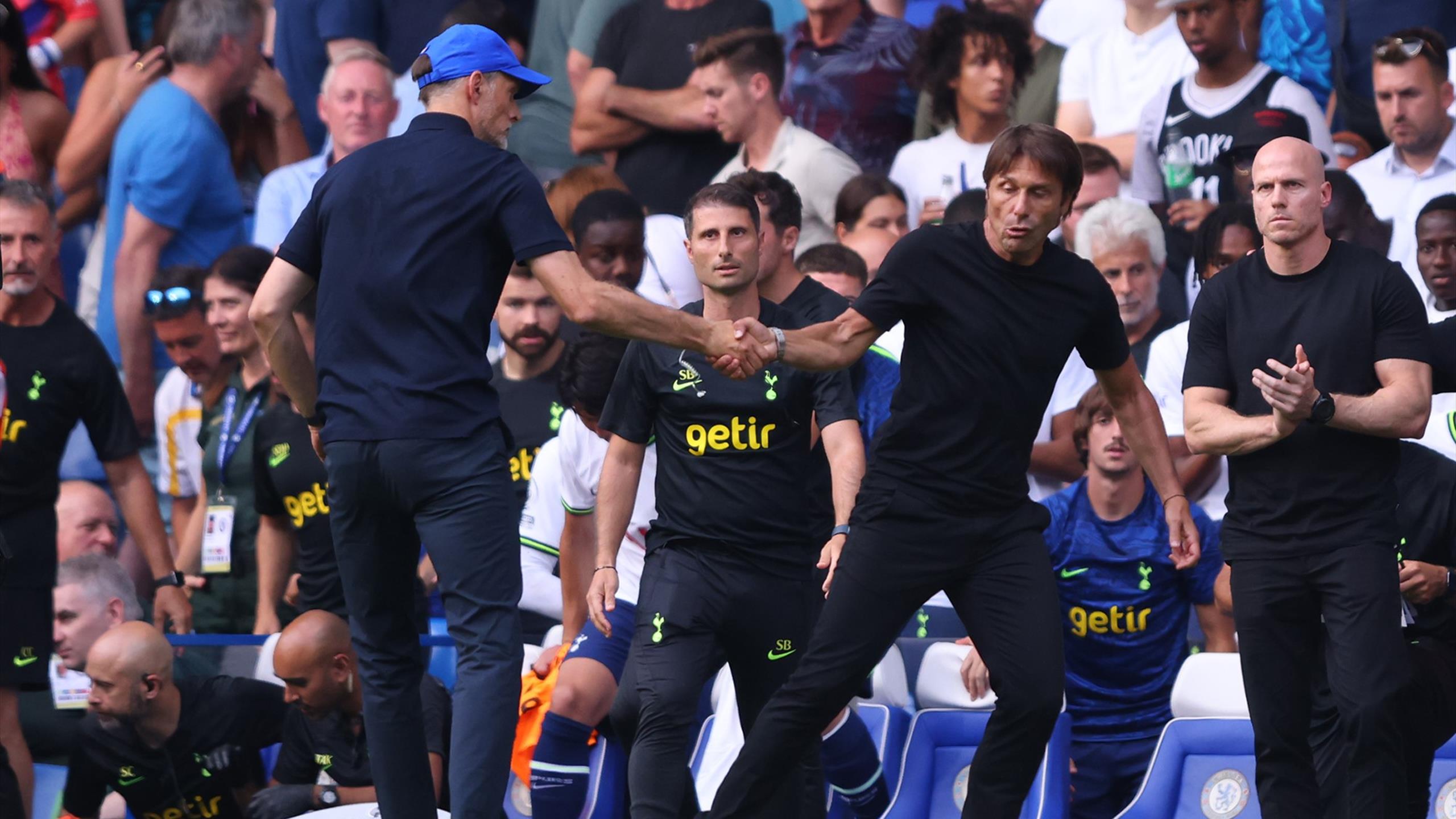 On Saturday evening we did not think it possible that by the end of the weekend there would be someone who valued eye contact more than Jamie Redknapp (having demanded it from Gary Neville during a heated argument about Manchester United after their defeat to Brentford), but lo and behold, Thomas Tuchel went and trumped him on Sunday.

‘You love it’ – Tuchel unrepentant over clash with Conte

We Brits are a sentimental bunch. Big backers of the “On This Day” trend and always eager for regular doses of nostalgia to help us remember the good times, and so it brought us great joy to watch peak “Barclays” in action, unfolding before our very eyes in the year 2022, with a moment that – at the time the Premier League celebrates its 30th birthday – will be remembered for 30 more years to come, at least.

It is the best part of a decade since handshakes made Premier League headlines – or more so the lack of, between John Terry and Wayne Bridge in 2010 and then Luis Suarez and Patrice Evra two years later – but now Tuchel and Antonio Conte have themselves entered the league’s folklore.

“When you shake hands, I thought we look into each other’s eyes, but we had a different opinion so it was emotional,” Tuchel said, who in the searing London heat could hardly contain himself when Chelsea had gone 2-1 up in the second half.

“It’s emotional. You like it,” he added. “It was heated up and heated up. Just look at it. It’s the Premier League, it’s the game. You love it, no? We love it. We are emotional coaches.”

The bust-up, laughed off Tuchel as well as Conte – who quite unsurprisingly told us all “I’m not pacific” – was the back-page worthy moment, although the fallout this week will also be focused around Tuchel’s somewhat justified rage over the officiating in the 2-2 draw.

In his opinion, neither of Spurs’ goals should have stood, and while a punishment is likely for both Tuchel and Conte, the former is not entirely pleased that referee Anthony Taylor will get a gig this weekend.

“So good!” he quipped. “I cannot coach but the referee can whistle the next game.”

Again, Conte took umbrage with this, insisting he would “never, never” talk about referees, but once more as we unpack the drama of another wild Premier League ride, the lack of accountability for errors from officials is staggering, and while petitions and the like are excessive reactions, perhaps a more transparent system where mistakes are addressed would help pacify an angry fanbase. Just an idea.

‘We did enjoy it!’ – Conte on spat with Tuchel

Man Utd given the run around

How do you solve a problem like Manchester United? It’s seemingly mission impossible, but for starters, Erik ten Hag had them running 13.8km yesterday to replicate how much further Brentford ran during the 4-0 embarrassment on Saturday.

That Sunday jog will have felt humiliating, so too the sight of United propping up the table, and now expectations are diminishing by the week, while Gary Neville impressively finds ways to keep his monologues fresh despite the monotony of what is unfolding in front of him.

With Arsenal already six points above United, Spurs and Chelsea looking like top-four rivals, and with a host of – arguably 19 – teams playing better than Ten Hag’s side in the top-flight, what is actually realistic for this team? Is top six a distant dream? Are they destined for mid-table mediocrity?

The club may need a change of owners, but with that not forthcoming, the players do need to take responsibility for the results as well, and wouldn’t you just know it, it’s Liverpool next in seven days’ time.

If we had a pound for every time we’ve seen tweets or articles stating ‘You Won’t Believe What Tweet This Footballer Liked’, and then went to check said footballer’s list of likes, and see said tweet nowhere to be seen – we’d maybe have enough for a day’s electricity.

However, on this occasion. It’s there for all to see, or at least it was at the time of writing, Neymar’s most recent liked tweet.

This comes after a decidedly awkward moment between Neymar and Kylian Mbappe in PSG’s 5-2 win over Montpellier, with the rift between the two plain for all to see when Neymar kept the ball and scored from the spot despite Mbappe wanting a second attempt having missed a penalty earlier in the game.

The signs were there, including that training session moment where Neymar ignores Mbappe and waits for Lionel Messi instead, but now it could not be more clear. Trouble is brewing at PSG, and if “Owner Mbappe” gets his way – having reportedly asked the club to sell Neymar – then we may not see two full seasons of this top-quality but fractured front three.

Yeah, we kinda had to remember this one. Alan Pardew versus Arsene Wenger back in 2006!

The Premier League’s second gameweek wraps up at Anfield tonight, with Liverpool hosting Crystal Palace in the first of two straight Monday Night Football matches for Jurgen Klopp’s side.

Elsewhere, you’ve got three La Liga games, including Atletico Madrid at Getafe, and both Juventus and Napoli in Serie A action later as well.

Watch: Incredible scenes as Tuchel and Conte sent off in heated clash