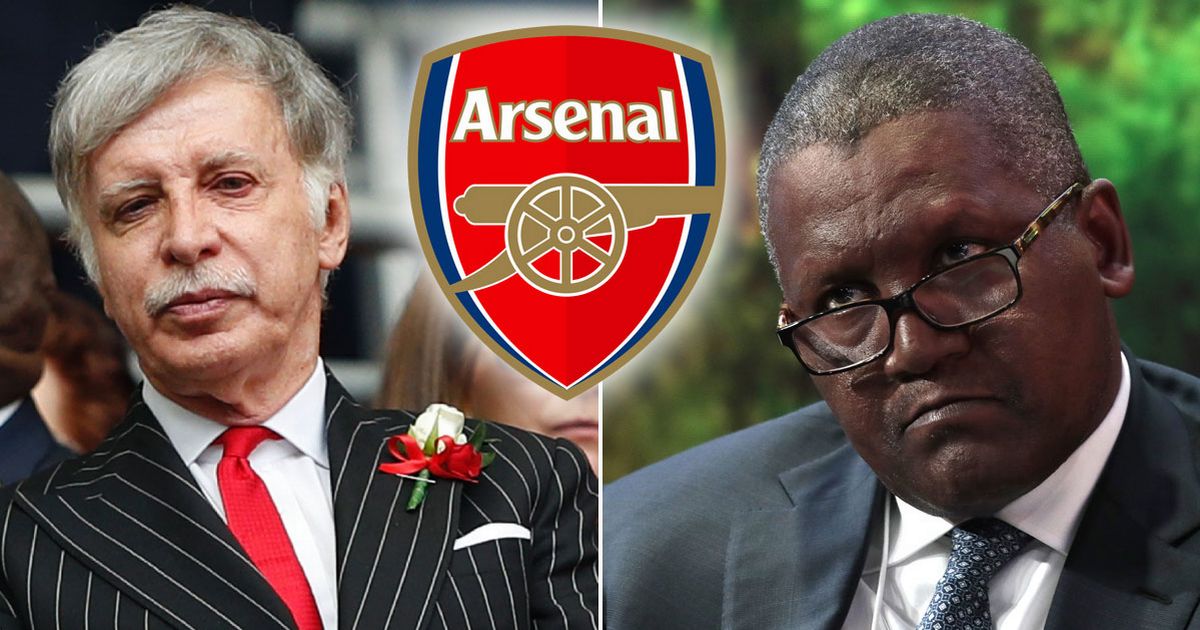 Arsenal’s ownership under the Kroenke’s has been a rocky road.

The American businessman became majority shareholder of the Gunners in 2011 and the club have since found success hard to come by.

That has led to spells of discontent amongst fans, as well as interested parties throwing their hat into the ring to buy the club.

Last year, in the wake of the European Super League scandal, Swedish businessman and Spotify founder Daniel Ek launched a high-profile takeover bid which was abruptly turned down.

The Kroenke’s insisted at the time that the club is not for sale under any circumstances, issuing a statement saying: “In recent days we have noted media speculation regarding a potential takeover bid for Arsenal Football Club. We remain 100% committed to Arsenal and are not selling any stake in the Club. We have not received any offer and we will not entertain any offer.”

Whilst the Kroenke’s resisted that £1.8billion offer and look set to maintain the same stance, they could have another takeover proposal to consider in the near future.

That’s because Africa’s richest man, Aliko Dangote, has regularly stated his desire to try and buy the club.

HAVE YOUR SAY! Should the Kroenke’s consider selling Arsenal? Join the discussion in the comments section.

Speaking in January 2020, he outlined he would look at launching a takeover as soon as he finished other projects he was working on.

At that time, he suggested 2021 as a potential target date, but that has now passed and the timeline of his other projects is unclear.

Speaking in 2020, Dangote said of Arsenal: ”It is a team that yes I would like to buy some day, but what I keep saying is we have $20billion worth of projects and that’s what I really want to concentrate on.

“I’m trying to finish building the company and then after we finish, maybe some time in 2021 we can.

Dangote and other interested parties have been told exactly how much it would likely cost to takeover the Gunners – or another ‘big six’ club.

In March 2020, Bob Ratcliffe – head of the football division for Ineos and brother of Sir Jim Ratcliffe claimed: “They’re all for sale”.

He told the Financial Times’ Business of Football Summit that a takeover of a big six club would cost someone like Dangote or anyone else at least £2billion, whilst a move for a team elsewhere in the Premier League would cost between £150million and £350million.

Whether or not Dangote will be in a position to make a bid of that level in the near future remains to be seen.

But he recently topped the Forbes Billionaires List as Africa’s Richest Person for for the 11th year in a row.

He is worth an estimated $13.9 billion, up from $12.1 billion last year after a 30% increase in the stock price of his most valuable asset, Dangote Cement.

He has publicly discussed his Arsenal plans many times.

In June 2015, for example, he revealed he was interested in buying Lady Nina Bracewell-Smith’s 15.9 per cent stake in 2011 before they were eventually bought by Kroenke.

“There were a couple of us who were rushing to buy, and we thought with the prices then, the people who were interested in selling were trying to go for a kill,” he said.

“We backtracked, because we were very busy doing other things, especially our industrialisation.

“When we get this refinery on track, I will have enough time and enough resources to pay what they are asking for.”

In September 2016, he hinted that a takeover would be a question of timing. and he wanted to “turn it around” at the Emirates.

“It’s not about buying Arsenal and just continuing with business as usual,” Dangote said.

“There’s no doubt [I’ll buy Arsenal], it’s not a problem of money.

“The issue is that we have more challenging headwinds. I need to get those out the way first and start having tailwinds. Then I’ll focus on this.”

“At the moment we are a little bit off track. We didn’t really realise that we were going to need almost 70 million cubic meters of sand. But we are catching up, and I’m sure we’ll be able to deliver it by the last quarter of 2017.”

After playing catch-up, his wealth has grown again and he will no doubt continue watching Arsenal’s situation with interest.