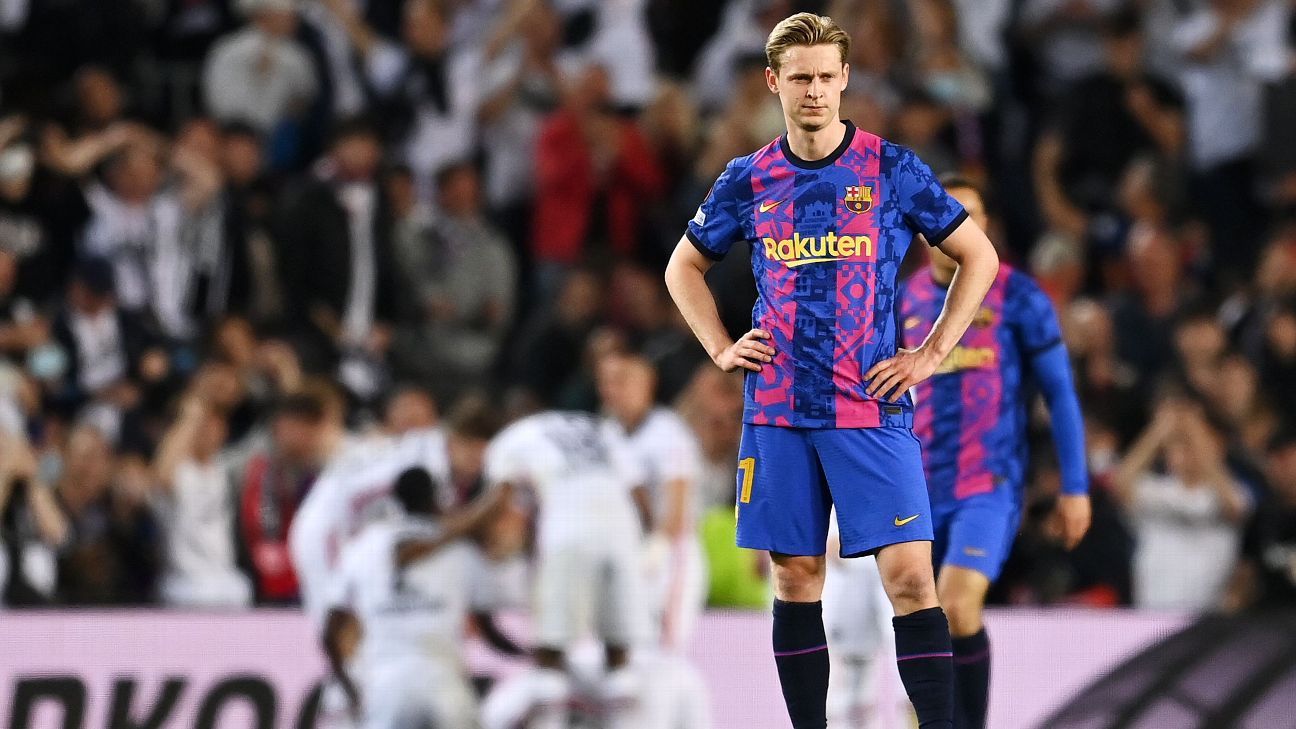 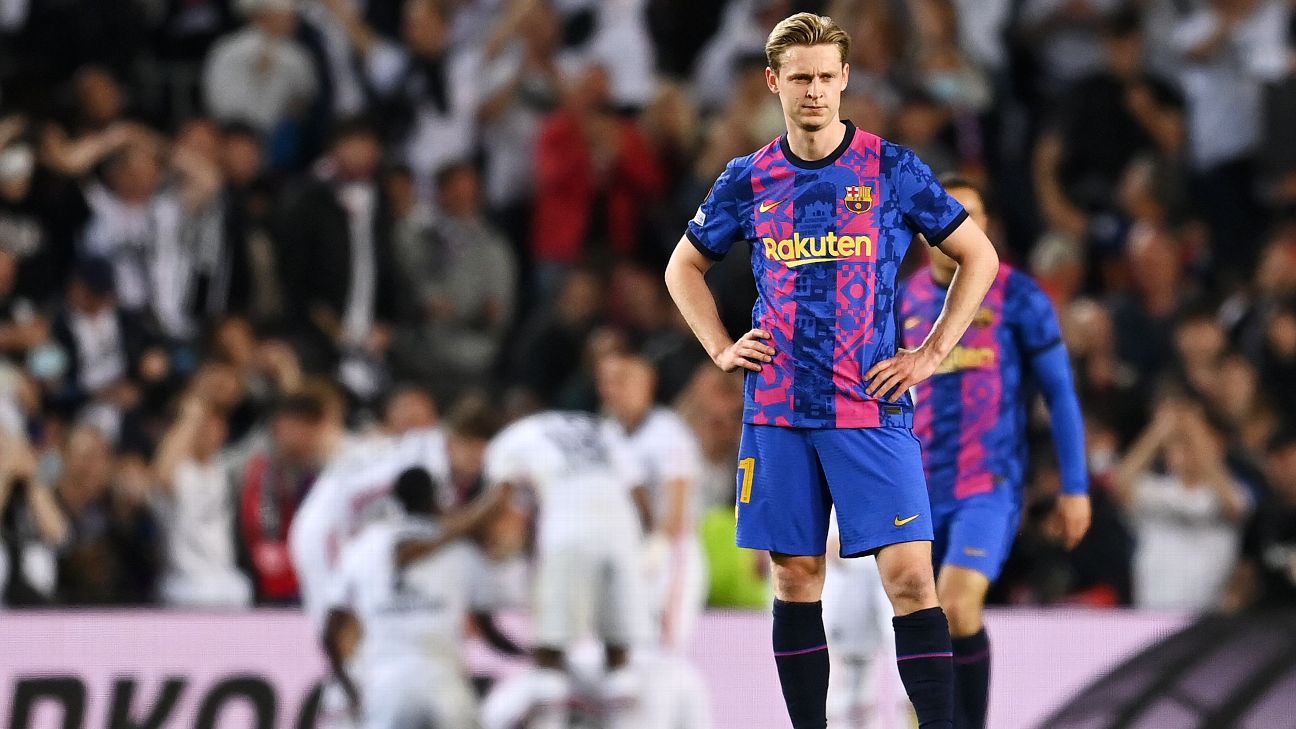 Frenkie de Jong’s future at Barcelona has been the subject of great interest this summer. Sources have told ESPN that Manchester United have agreed an €85 million (€65m up front and €20m in add-ons) deal to sign the midfielder, but negotiations have stalled over personal terms and the player’s desire to move. As a result, and due to Barca’s precarious financial situation, a host of other deals are awaiting a resolution before progress can be made.

Premier League giants like Manchester City, Liverpool and Tottenham Hotspur have started their transfer business very early, while Arsenal have more deals planned after landing Gabriel Jesus and Fabio Vieira among others, but United and Chelsea have been a little slower out of the blocks. So how will De Jong impact the clubs’ decisions? And what could Barcelona do to replace the Netherlands midfielder and improve their own squad once they have sold another 15% of their television rights (which they hope to do in early July) to raise more funds?

Here, our writers assess some top players whose club futures could be decided as soon as De Jong’s is.

Eriksen’s move isn’t particularly dependent on De Jong because it wouldn’t involve a transfer fee but it remains one United would like to get over the line. The feeling at Old Trafford was that Eriksen would re-join Tottenham but after Antonio Conte stepped back from a deal, United have been given renewed confidence. There is an acceptance that the Denmark international would rather stay in London and that he enjoyed his spell at Brentford last season, but United have not given up hope of landing him.— Rob Dawson.

The Netherlands midfielder has had a miserable time at United but if there’s one manager who can get the best out of him it’s his former Ajax boss Erik ten Hag. Sources have told ESPN that Van de Beek is set to stay at Old Trafford because he feels he will get opportunities. It’s likely United will sign his old Ajax teammate De Jong, but after the departures of Nemanja Matic and Paul Pogba, Van de Beek should get chances in midfield.– Dawson.

One thing has been clear for a while: Raphinha would ideally like to go to Barcelona. However, the club’s transfer incomings depend on raising funds and they believe the Brazilian winger will wait for them to get their finances in order, even if it means postponing a move until January. The financial paralysis at Camp Nou initially created a delay others felt they could exploit.

Arsenal had (at least) two offers rejected, but the absence of an agreement with Leeds then gave Chelsea a sense they could pull off a deal. The Blues have now agreed to match the £60m asking price, which has put Barcelona under renewed pressure to follow through on their interest, as Leeds want clarity over the situation. In recent days, Barca have made an offer worth €45m with add-ons but that remains short of Chelsea’s bid and is therefore unlikely to be accepted. Raphinha could wait for Barca, but Chelsea won’t wait forever.

Meanwhile, Ousmane Dembele’s contract renewal is higher on Barcelona’s to-do list. Chelsea have been repeatedly linked with a move for the France international forward, but sources close to the club have played down their interest albeit, possibly significantly, without ruling it out entirely. — James Olley.

Arsenal and Manchester United are leading the race to land the Ajax defender. The Gunners have made two offers below Ajax’s desired €50m valuation and sources told ESPN that both Ajax and Martinez are waiting for United to show their hand before deciding what to do next.

United have been stalling over tabling a formal bid until they know exactly how much De Jong will cost to sign, but are expected to make a move in the coming days. Martinez worked under new United boss Erik ten Hag at Ajax and is reportedly keen to continue that relationship. Still, a move to Arsenal remains a distinct possibility, especially given the club have made the most effort to this point and manager Mikel Arteta has made his fondness for the 24-year-old clear.– Olley.

Leicester City have resigned themselves to moving Tielemans on this summer, given he has a year left on his contract and they need to raise funds to revamp their squad. Leicester would ideally like the 25-year-old midfielder to move abroad and Barcelona have been mooted as a possible destination in the past, though their financial situation makes it difficult.

Tottenham were interested but opted to sign Yves Bissouma from Brighton instead, meaning Arsenal may have a clear run at the Belgium international to bolster their midfield. For the time being, however, the Gunners have focused on other targets with Fabio Vieira (£34m) and Gabriel Jesus (£45m) acquired from Porto and Manchester City respectively, while they pursue an agreement with Ajax for Martinez.

Tielemans would seem a logical fit for Arsenal to bolster their midfield options but Barcelona ruling themselves out of the running would make a deal more achievable. — Olley.

Chelsea captain Azpilicueta triggered an automatic one-year extension on his contract last summer but is keen to return to Spain with Barcelona this summer. However, Chelsea boss Thomas Tuchel would prefer to keep the 32-year-old given his leadership qualities and intimate understanding of the club after a decade of service.

Sources have told ESPN that Azpilicueta is torn over his future and has not ruled out the possibility of staying, but at the same time feels he has achieved everything he can at Chelsea: February’s Club World Cup success in Abu Dhabi completed the set of winning every possible trophy available. Azpilicueta’s wage demands are relatively low but Chelsea would demand a transfer fee should he depart, another factor which has prevented cash-strapped Barcelona from making an offer to break the impasse. — Olley.

Kounde has an €80m release clause in his contract, but though Chelsea have been reluctant to pay it, their interest is genuine and sustained. Barcelona are also keen to sign the Sevilla defender, but will only pay €45m and are exploring potential options, including player exchanges, instalments and add-ons to bring the fee down.

Sources close to Chelsea believe Kounde is waiting for the Catalans to reveal their stance before making a decision on his future. Chelsea could trigger a move by meeting the clause but they have failed to reach an agreement in previous transfer windows on the basis they believe that fee is too high. Sevilla are reported to be willing to accept around €60m, but this is another situation complicated by Barcelona’s intent not being matched by meaningful action yet. — Olley/Marsden.

Barcelona plan to announce and present the signings of Kessie and Christensen this week. Both will arrive as free agents after their respective deals expired with AC Milan and Chelsea on June 30. The reason for the delay in making their moves to Camp Nou official, like most things, lies in Barca’s financial problems. As things stand, they would not be able to register either player for LaLiga if the season started tomorrow.

For that to be possible, they need to either sell more of their television rights (they sold 10% for €207.5m last week), reduce their wage bill or bring in some money through player departures. However, not being able to register players does not prevent them from signing players. It was only on the eve of last season that they managed to make space within their LaLiga-imposed spending cap to register Memphis Depay and Eric Garcia. — Sam Marsden.

Once the world-class Poland striker made it clear he wanted to leave Bayern Munich, Barcelona appeared the most likely destination — though sources have told ESPN that they have had three offers, the latest over €40m, rejected. Following talks with agent Pini Zahavi, Barca feel they have “kept their word” to Lewandowski by offering Bayern more than €40m, but their failure to agree a fee could open the door to potential suitors.

Sources have told ESPN that Tuchel wants Chelsea to enter the running if there is any possibility Lewandowski would consider moving to England. Lewandowski’s contract expires in 2023, so Bayern may give him his move in order to receive a transfer fee, but are reluctant to negotiate currently. — Olley/Marsden.

This is perhaps the transfer most directly linked to De Jong’s future. Barca maintain an interest in Bernardo Silva, who is thought to be open to a move to Camp Nou, but there are significant hurdles to overcome for a deal to happen.

Barca are well stocked in midfield so would need De Jong to leave to make space — and to raise money to fund a move for the Portugal international. Even then, while Pep Guardiola has said players who want to leave can leave, City would obviously prefer to keep Silva and their valuation, as much as €100m, could prove prohibitive at a time when Barca are also pursuing Lewandowski, Raphinha and Kounde.– Marsden.