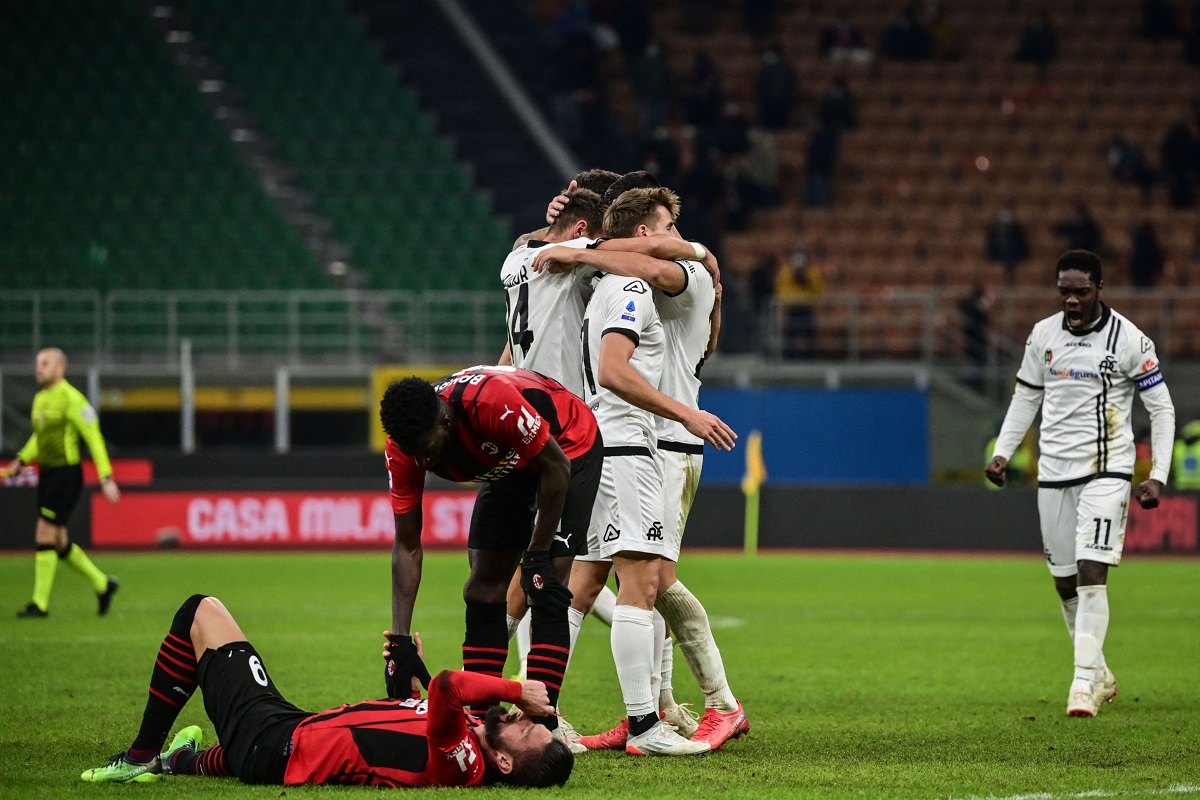 Yesterday’s clash between AC Milan and Spezia certainly had a dramatic ending, but not in favour of the Rossoneri, unfortunately. In fact, everything that can go wrong in such a scenario happened to Stefano Pioli’s men.

Yes, I am of course talking about the disallowed goal (well, technically it wasn’t disallowed) and the following winner for Spezia, late into added time. It’s an officiating error that cannot be accepted at this level and everyone knows that.

The referee apologised immediately on the pitch for not letting the play go, and the frustration/reactions of the Milan players summed it all up pretty well. Ante Rebic was up in the referee’s face, as we have seen before, but this time he had every right to do it.

The heated debates that have followed the incident have certainly put a lot of blame on the referee. Rightfully so, and even to the extent that AIA (Italian referees association) apologised to Milan directly, something that is very rare.

Still, they blocked everyone on Twitter even if they just slightly questioned the decision, but that’s another story. The apologies from the referee himself and AIA do soften the blow a tad, but it’s very marginal.

There have been talks of replaying the game because of the error which, I cannot stress enough, was serious and should not go unpunished. However, replaying the game would frankly be ridiculous and besides, such a decision holds no ground in accordance with the rules in place.

Don’t get too carried away with the official appeal of Codacons (read here), they complain about more or less everything. The reactionary part of you may agree with replaying, but the game is since long over and Milan now need to focus on the upcoming clashes against Juventus and Inter.

The reality is that we have seen similar errors from referees before, not letting play continue despite a good chance emerging. The only difference is that the ball hasn’t ended up in the back of the net. Last night’s incident, though, is no different in theory as the whistle came before the goal was scored. Besides, it would set a very dangerous precedent. No thanks.

The officiating errors may be adding up for Milan, but dwelling over it will do no good especially in this situation as the mistake has already been acknowledged. It can happen to anyone. It doesn’t make it fair, no one is arguing that, but there is nothing that can be done about it other than moving forward.

The Rossoneri shouldn’t waste the energy generated on complaining but rather use it to beat Juventus and Inter instead. And we know that they aren’t doing the former, seeing as Zlatan Ibrahimovic and a few more consoled the referee after the game, reduced to tears by his mistake.

Moving on and getting over seem to be the keywords taken from this experience, which showed just how important one mistake can be. Will we be talking about it like Muntari’s goal vs. Juve? Maybe, but it’s up to the players to make sure that it doesn’t end up like that.