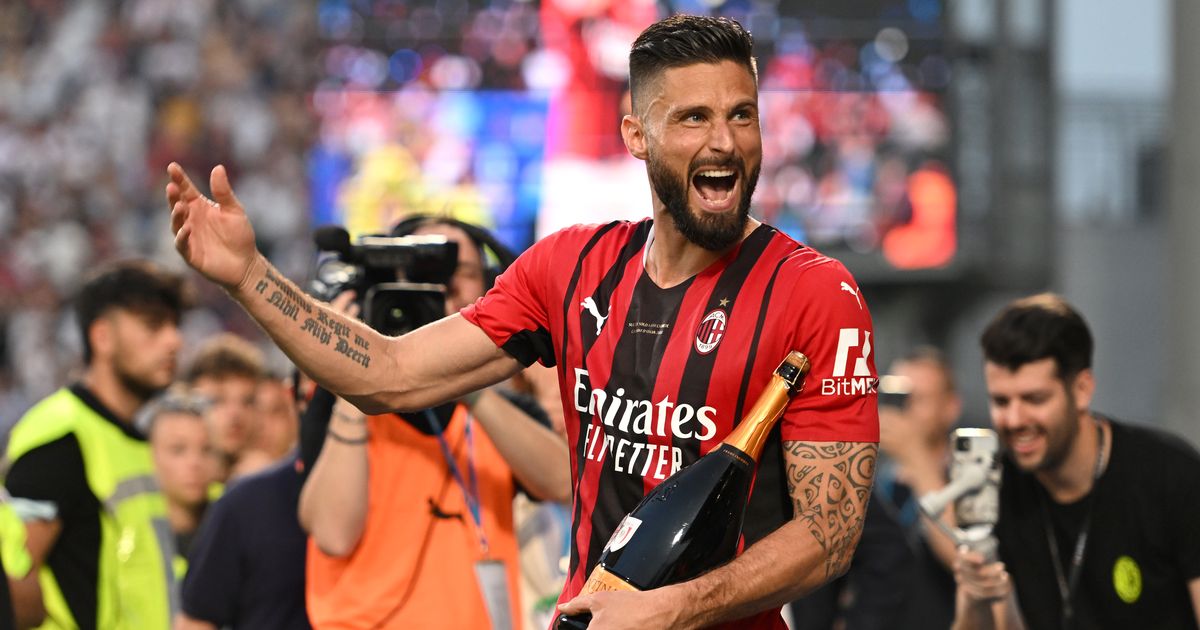 Olivier Giroud was mobbed by teammates after his title-winning brace

The 2021-22 Serie A title was one always destined to end up in Milan – it was just a case of whether it would be AC or Inter lifting the trophy come May.

It would be the former who would go on to be crowned champions – their first league crown since more than a decade ago back in 2011.

AC Milan were every inch the worthy winners as they pipped their fierce rivals Inter to the title on the final day of a gruelling, dramatic season.

Despite being 40 years of age, Zlatan Ibrahimovic remains the pin-up boy for this AC Milan achievement. The veteran striker has defied plenty of critics and nay-sayers with some of his performances this term, but it is clearly not just the Swedish star that deserves the plaudits.

The likes of goalkeeper Mike Maignan – who arrived under immense pressure to fill the void left by academy star Gianluigi Donnarumma, or ex-Chelsea defender Fikayo Tomori are just as worthy of huge praise for their efforts this term.

Lifting the title also goes some way to vindicating the call from the club hierarchy to appoint manager Stefano Pioli back in 2019 despite the fact he had briefly taken the reins at Inter. He has proved to be an inspired appointment and sealed his place in the hearts of the Rossoneri faithful forever.

A fantastic communicator, Pioli has recently admitted the winning mentality instilled in his troops was born in the wake of a humiliating 5-0 hammering at the hands of Atalanta back in December 2019.

HAVE YOUR SAY!Will AC Milan continue to be a dominant force in Serie A once again? Comment below

“It was one of the most negative moments of my career,” he admitted to DAZN last week, “but also one of the most valuable. That was when we realised what was needed to develop this team.”

Pioli did not achieve this incredible feat alone, he was aided by other high-profile figures within the Milan hierarchy, like club legend Paolo Maldini in the technical director role or Ivan Gazidis – a name Arsenal fans will know very well – as CEO.

In less than four years this group, along with owners Elliott Management Corporation, have completely transformed the fortunes of the club and enjoyed a drastic turnaround from the ill-fated reign of previous club president Yonghong Li.

Under Li’s stewardship, there were accusations that Milan could not afford to cover the cost of the amount of players they had already brought in and media blackouts whenever an organisation questioned their operations.

The road to recovery wasn’t always plain-sailing, with Maldini in particular coming under serious scrutiny earlier on in his tenure for his part to play in the disastrous appointment of Marco Giampaolo – who lasted just seven games at the helm.

Pioli duly stepped in to steady the ship, but he was not the man many within the club wanted in the long-term. That person was Ralf Rangnick, now of the struggling Manchester United side who finished the season in sixth.

Gazidis was keen on adding the German to club ranks, but did not consult either of Maldini or then-chief football officer Zvonomir Boban – sparking a feud within the boardroom that threatened to derail Milan entirely.

Lo and behold, results started to come under Pioli – who has given the keys to the club on a permanent basis, while the talent identified by Maldini was clearly a huge improvement on what came before them. The pair worked perfectly in tandem.

“Stefano is always calm,” Gazidis claimed. “He’s a great man, not just a great coach, an example for all of us.” Milan legend Clarence Seedorf discussed Maldini’s influence with Corriere dello Sport: “Paolo’s presence gives the team a winning mentality and embodies the Milan DNA.”

As the dust settles on Milan’s stellar achievement, it is vital to recognise the magnitude of Pioli’s stunning work. The 56-year-old boasts the best points-per-game average of any Milan manager other than ex-England boss Fabio Capello.

AC Milan have been completely transformed in the last few years

Maldini’s reputation has only been boosted further by intelligent additions like Tomori, who has left a Chelsea side now prowling the market for the kind of top-class central defender they had on their books before allowing him to make the move to Milan.

Shot-stopper Maignan has arguably been the bargain buy of the Serie A season after costing the club just £15m, while the £19m purchase of Sporting academy graduate Rafael Leao could go down as one of the shrewdest pieces of business in Milan’s recent history.

It was a phone call with Maldini that persuaded Leao to make the switch to the San Siro, just like it was for exciting full-back talent Theo Hernandez. At long last, it is starting to feel as if Milan are a club Europe’s most prestigious talents want to play for again.

The game that eventually got the club over the line came in the form of a trip to Sassuolo which Milan made light work of as they cruised to a 3-0 win on the road. Olivier Giroud scored a brace to send Milan on their way, with the Frenchman enjoying his first league title victory since his Montpellier days.

Giroud has often been described as the kind of striker that few clubs would turn down, but simultaneously not good enough to lead the line for an outfit looking to win a league.

He has gone some way to disproving that theory, as the ex-Arsenal and Chelsea striker has played in the majority of Milan’s games this term and netted 11 goals in the process. In fact, Giroud’s reputation as a good, but not great striker does him a disservice.

This is a player who almost single-handedly won Montpellier the only Ligue 1 title in their history, Milan’s first Scudetto in over a decade and is on course to surpass Thierry Henry as the French national team’s leading goal-scorer (Giroud is just four behind the Arsenal legend).

Of course, Ibrahimovic and Giroud are hardly youthful options to call upon every game moving forward and the former is out of contract as of next month, admitting he fears the looming shadow of retirement.

“I feel a bit of panic at the prospect of stopping playing,” the seven-time Serie A winner explained, though two of those titles were stripped of him after the Juventus match-fixing scandal.

“For sure, I will continue as long as possible, as long as I can get results but being good on the pitch, without suffering. I don’t want to have regrets when I quit, so I want to maximise my career.

“What will happen next I don’t know, as I write in my book I’m a little scared. A role in football? We’ll see when the day comes. I could start when I stop or take a break, or disappear completely. Of course the adrenaline I feel in me I will never feel again.”

Whatever happens, he has played a vital part in allowing Milan return to where they truly belong – at the top of Italian football.