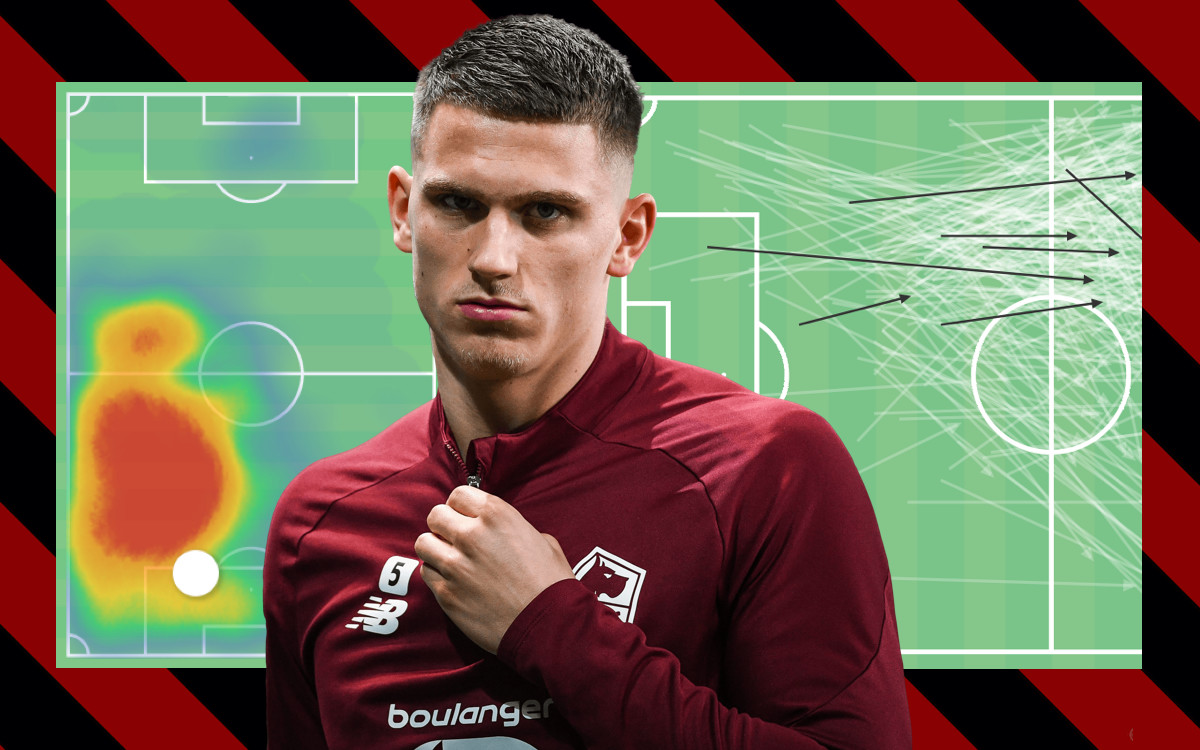 AC Milan entered December 2021 on an inauspicious note. In the opening game of the month, Simon Kjaer was stretchered off as clouds of gloom loomed over the Stadio Luigi Ferraris.

Two days later, Kjaer underwent surgery on the anterior cruciate ligament in his left knee, instantly altering Milan’s transfer plans for the winter. The Dane was ruled out of action for six months, effectively ensuring his unavailability for the remainder of the season.

Milan would be forced to flex their muscle in the market, probing for a replacement. The options are few, the funds are fewer. Amidst this chaos rang a name that’s been quietly echoing in the frenzied wheelhouse called the rumour mill: Sven Botman.

A product of the famous Ajax academy, Botman is widely regarded as a world-class prospect. The 6’4” Dutch behemoth will turn 22 on January 12 and yet he has nearly 10,000 minutes of game time as a senior professional footballer. Albeit a bit raw, Botman possesses a wide range of distinctive skills that warrant attention.

Luis Campos and his team can claim credit for spotting the mercurial talent, consequently leading to the bumping of Ajax’s coffers by £8m, ushering Botman to the Stade Pierre Mauroy. Botman received his call-up to the Netherlands senior team in November 2020, shortly after securing his move to Lille. Since joining the French side in July 2020, Botman has proceeded to become a key member of the first team.

Last season, Botman played a crucial role in Lille’s Ligue 1 winning campaign, being an integral member of a defense that achieved the highest number clean sheets in Europe’s top five leagues. He has missed a third of the season thus far due to a groin injury. Not a surprise, then, that Lille couldn’t manage to secure a single clean sheet in his absence.

Having lost head coach Christophe Galtier and goalkeeper Mike Maignan over the summer, Lille do not possess the steely resilience of last season. From conceding just 23 goals in 38 games, Lille have already let in 26 goals in 19 games this season. The team finds itself languishing at eighth in the table, the drop-off being experienced by practically every player in the side. But, Botman continues to stand tall, holding together a defence that’s crumbling around him.

How would he fit in at Milan?

Milan are in the market to cover Kjaer. If the Dane didn’t suffer the injury, Milan’s transfer priorities may have been entirely different. So, is Botman a fitting proxy for Kjaer? Stylistically, he is not, but what he is instead is a spitting image of captain Alessio Romagnoli.

Kjaer is an aggressive, pressing defender, who leaves his line, at times almost recklessly, to assist in the systemic press. Botman on the contrary is a traditional defender, who prefers to defend deep and perform the role of a stopper. The Dutchman presses at 4.32 presses per 90 minutes (per 90) in the defensive third, which drops to 2.56 presses per 90 in the midfield third.

The worrying part isn’t that he resembles Romagnoli more than Kjaer; it’s that his numbers aren’t notable in comparison to other centre-backs in Europe’s top five leagues. Botman is the 10 percentile for interceptions (1.28 per 90), 25 percentile for pressures (7.1 per 90), and 27 percentile for tackles (1.17 per 90) – all of which indicate a rather steep scale of development that awaits the Dutchman.

What are the positives?

The numbers might paint a worrying picture, but there are elements to Botman’s game that would be hugely important to Milan’s style of play. Stefano Pioli likes to play from the back, sometimes using his centre-backs as playmakers to progress the ball into the final third by bypassing the midfield.

Botman has a penchant to pass from deep, attempting more long balls (14.7 per 90) than Romagnoli (9.8 per 90) and Kjaer (12.5 per 90). While this is a positive, Botman’s long ball passing accuracy (73%) can improve, being slightly behind Kjaer’s 74.8% and Romagnoli’s 77.3%. This must be caveated by the fact that he attempts more passes than the two Milanese defenders, which should present the passing accuracy as applaudable nevertheless.

As a traditional defender, Botman can swap roles with Fikayo Tomori, allowing the Englishman to press with greater intensity, while Botman sweeps as the last man. He could use his monstrous height in the box to ward off aerial threats, while Tomori hustles attackers to make mistakes. The partnership would be an imperfect, but workable flip on the dynamic Kjaer shared with Tomori.

Botman doesn’t defend the channels well and tends to fret against pacy attackers. His big frame is an asset but simultaneously works against him as a weakness as well. He would not be able to stretch the line of defence, in place of which he will be required to exercise positional discipline.

This could imply that Theo Hernandez improves defensively or becomes more conscious about the defensive aspects of the game. The change may initially appear to be undesirable, but in the long run, it could be the catalyst that invigorates Hernandez to take that imperative leap of quality as a defender.

Botman is presently perhaps the most coveted central defender in Europe. His contract expires in 2025, but there is a bargain to be made given Lille’s precarious financial situation. The sheer competition, especially the persistent interest by Newcastle United, has driven up Botman’s valuation to a point wherein it may be prudent to question the merit of entering into a bidding battle.

Botman isn’t a bonafide improvement on Kjaer and is statistically similar to Romagnoli. Does a transfer value of over €35m make sporting and financial sense for Milan, especially when this is a position not bereft of abundant supply in the very league Botman currently plays in?

An argument can be made that this is an investment for the future. Sure, but given his characteristics, is Botman a tactical fit, or, more decisively, would he likely be a deterrent? Milan’s defense has been shambolic in Kjaer’s absence, precipitated by Tomori demonstrating chinks in his armour. Will Botman exacerbate that problem?

The numbers aren’t encouraging. They advise action backed by caution. Milan aren’t signing a stop-gap option this January, especially with Romagnoli’s bag half-packed and Kjaer clocking 33 years of age. This, indeed, should be treated as a manoeuvre for the future.

No pressure really, but the signing of a centre-back has now become a fundamentally important decision, one Milan can’t afford to get wrong in the most literal meaning of the phrase.

READ MORE: Why Milan are buying Pellegri for €3.5m and the plans for summer striker signing