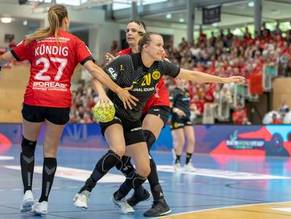 In their headline Bundesliga clash with Thüringer HC, coach André Fuhr’s BVB team were unable to replicate the good performances of the previous weeks and lost 38-27 (17-14). It was the Black & Yellows’ fourth defeat of the season.

“We had nothing to counter the passion that spilled over from the stands to the THC team. This was not a good performance from us,” said a disappointed André Fuhr after the final whistle.

It was clear from the start that it would be a heated game in front of a crowd of over 1,000 fans in the Salza-Halle in Langensalzach. While BVB had already claimed the runners-up spot in the league, THC were still fighting for third place. The Black & Yellows quickly fell behind, and Fuhr elected to call his first time-out after just 4:37 minutes of play with his team trailing 5-2. This was the earliest he’d reached for the green card all season. Kerstin Kündig had been given time and space to shoot on goal on three successive occasions in the opening period, and the BVB coach clearly felt a change was needed.

After Fuhr’s words of encouragement, the BVB defence managed to adjust and cope better with THC’s fast-paced attack. After 13 minutes, Tina Abdulla scored to bring the two sides level at 7-7, and, two minutes later, she popped up with a goal on the counterattack to give BVB the lead for the first time at 9-8.

But that meant little in this headline Bundesliga clash. Both sides went toe-to-toe in what was proving to be a fast-paced and high-quality encounter. On the THC side, Swedish goalkeeper Irma Schjött was particularly impressive, repeatedly making strong saves to prevent BVB from taking the lead. This clearly frustrated BVB, who were running out of steam as their opponents started to gain the upper-hand with their committed performance. Thüringen head coach Herbert Müller expected nothing else from his players: “We had planned to throw absolutely everything we had into this one,” he said.

The score was tied at 12-12 in the 21st minute, but THC surged to a 15-13 lead by the 25th minute. Lamprini Tsakalou then took advantage of an outnumbered BVB defence to increase the lead to 16-13. BVB were struggling to gain a foothold against the home side’s aggressive defence and were grateful that Merel Freriks managed to score seconds before the half-time break to make it 17-14 and thus reduce the deficit to just three goals.

The second half continued at the same pace. For BVB, Mia Zschocke and Tina Abdulla missed chances to score, while down the other end, Kerstin Kündig in particular remained on target. Six minutes into the second half, BVB were trailing 21-16. When Asli Iskit (40) increased the lead to 23-17, it seemed like THC already had the win in the bag. André Fuhr switched to a more offensive set-up, assigning Frida Rønning to mark Kerstin Kündig’s. When Rønning failed to score a penalty in the 50th minute against goalkeeper Schjött, the game was as good as settled at 30-22. Damage limitation was the order of the day for what remained of the game. When all was said and done, the final whistle blew with BVB down 11 goals at 38-27.