"Who should we be afraid of?" 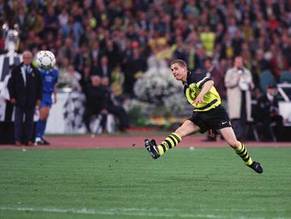 Lars Ricken scored the final goal of the game to make it 3-1 in the 1997 Champions League victory. He talks about the triumph 25 years ago in an interview.

Which secret about the greatest success in the club’s history and the way to it still needs to be revealed?

Actually, everything has already been said or written about it. My example shows that you have to be persistent for such a success – and overcome resistance. In 1996, I had massive back problems and missed the European Championships. That was a frustrating injury, and it took me a long time to get back into the team. So I went into the 1996/97 season with a lot of uncertainty. And then at the end there was the Champions League title. That’s what football is about, that’s what life is about: mastering such difficult situations.

On the way to Munich, Borussia first knocked out AJ Auxerre (3-1/1-0) and then Manchester United (1-0/1-0) in the spring of 1997 – in each case after decisive goals from you. Your trademark, with which Juventus later became acquainted: was that youthful recklessness, or did you have nerves of steel?

Both. I was never nervous. When I was brought on a substitute for the first time or when I was allowed to play from the start for the first time, both in my own stadium, I had zero nervousness. On the contrary, I thought: finally I’m being let loose, finally I can show what I worked for all those years in my youth. This feeling, this attitude has never changed. So at a young age I already became the man about whom it was said: He scores the decisive goals. A certain carefree attitude helped me to do that. I wasn’t particularly high up in the team hierarchy. Matthias Sammer, Michael Zorc, Stefan Reuter or Jürgen Kohler, and so on were responsible for the important issues. I was able to focus on my strengths and develop a certain amount of cheekiness. That went so far that I reassured our club hierarchy before the second leg in Manchester: Don’t worry, I’ll score a goal. It was a good thing that it turned out that way.

The actual goal in the 96/97 season was the Bundesliga title hat-trick. But after six defeats in the second half of the season, you had to say goodbye to that early on. After the 2-0 defeat in Bielefeld, Andreas Möller even spoke of a “broken, even dead team”. How risky was it to bet everything on the Champions League?

It’s hard to say, but it was a complicated season. We wouldn’t have qualified for the next Champions League season via the Bundesliga, we could only participate as defending champions. The second half of the season was the worst we ever had under Ottmar Hitzfeld. In the end, the success was due to the ambition and success-orientated nature of the players and their total focus on the title. Nobody went into the final against Juventus with any self-doubt.

There was noticeable friction between President Dr. Gerd Niebaum and Ottmar Hitzfeld, and the chemistry between the coach and parts of the team was no longer right. Against the background of this difficult internal climate, it sounds almost unbelievable that you were able to push all obstacles aside in the spring 25 years ago.

I was 20 at the time – and out of the loop on these issues. I commuted between the Bundeswehr (German armed forces) and training or playing. There wasn’t much free time to think about other things. That wasn’t my job either. I was in the room with Matthias Sammer and of course overheard one thing or another, but I didn’t really deal with it. Beyond that: Who should we be afraid of? We were a very good team in terms of quality, almost all of us were national team players.

The semi-final in Manchester proved legendary with Jürgen Kohler’s saves on the line. Did the spirit evolve at Old Trafford that carried BVB through the final five weeks later?

Yes, that could be the case. If perhaps one team stood above Juve that season, it was Manchester United with Schmeichel, Beckham, Cole, Giggs, Solskjaer and Cantona as living legends. Perhaps they were even more highly rated than Juventus, who had at least won the Champions League against Ajax Amsterdam the year before. To get the upper hand against Manchester United twice was quite an achievement. And that was without the usual suspects writing the storylines in these games. In the first leg René Tretschok scored the goal, in the second leg sweeper Wolfgang Feiersinger proved to be a genuine rock in defence. So the confidence rose: Yes, Juve is strong. But it’s only one game, and we definitely have a chance if we bring our qualities to the pitch. Even more still: then we will win the game.