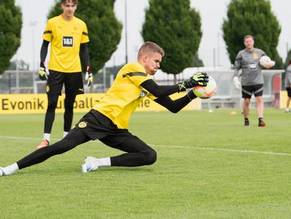 Goalkeeper Alexander Meyer was the only new signing present as Borussia Dortmund completed their first training session of the season. Afterwards, he took time to explain why he opted to make the move to BVB.

After a three-year spell as the first-choice goalkeeper at Jahn Regensburg, he has become a Black & Yellow. “It’s a big step but when Borussia Dortmund call, you don’t think twice. There are not many clubs that have the aura BVB does.”

The call from the Ruhr came at the right time as the 31-year-old, who previously laced his boots for VfB Stuttgart, wanted to return to the Bundesliga. “I’d played almost every match over the past three years and was in top physical condition. I wanted to take the next step and return to the top division. When I heard about Borussia Dortmund for the first time, it didn’t fully sink in. But the talks were very positive and pleasant, and I’m happy that it’s worked out.”

When Meyer thinks of BVB, the first thing that comes to mind is “definitely the Yellow Wall, the fans. I’ve experienced the stadium and the backdrop before with VfB Stuttgart. It’s a childhood dream for every little boy if you get to play at Borussia Dortmund one day.” (cr)