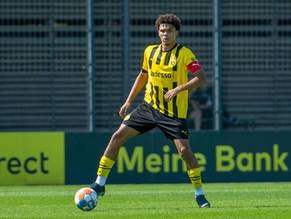 Borussia’s U19s continued their successful run of results with a hard-fought but deserved 2-1 win away to Bonner SC in the Bundesliga. Samuel Bamba scored the decisive goal in the 63rd minute of a hectic match, which was interrupted by a storm during the second period.

Coach Mike Tullberg had to bring in Marlon Zacharias between the sticks to replace the injured Marian Kirsch at late notice, while Jonah Husseck, Isaak Nwachukwu and Jaden Korzynietz were also unavailable. Prince Aning lined up on the left of defence for the first time in a league match. BVB’s attack-minded line-up took control of the match from the beginning, with Samuel Bamba twice failing to beat Bonn’s goalkeeper Hövel from a promising position. The opening goal instead came at the other end on the 12-minute mark, with forward Ole Richter rounding off the visitors’ first attack with an unstoppable long-range effort.

That goal against the run of play left its mark: “Unfortunately, we completely lost our way and repeatedly invited Bonn to hit us on the counter-attack by giving possession away,” bemoaned Mike Tullberg. The Black & Yellows took the pace out of the game, committed numerous passing errors and were consistently foiled by Bonn’s compact defensive line. The visitors defended with dedication and aggression and relied on the alertness of their goalkeeper for long spells. One such instance came in the 33rd minute, when Hövel clawed Michel Ludwig’s well-placed free-kick away from the corner.

At the other end, the promoted side made the occasional impact via sporadic counter-attacks – but never really posed a serious threat to Zacharias. Nnamdi Collins, Filippo Mane and Farouk Cisse were mostly on high alert when the opposition went forward. But there was little in the way of attacking play. Mike Tullberg reacted after only 36 minutes, bringing off Noa-Gabriel Simic – who looked tired following his involvement with the Croatia junior national team in the international break – and Michel Ludwig. Ayukayoh Mengot and Rafael Lubach came on in their stead.

Another goal for Paris Brunner

A 39th-minute counter-attack brought about the equaliser: the U17s’ top goalscorer Paris Brunner latched onto Mengot’s long pass from his own half, before coolly slotting the ball past the onrushing Hövel to make it 1-1. Mengot lit up the attack, while Lubach and Hendry Blank, who later replaced Aning, made an impact. Samuel Bamba ultimately scored the winner in the 63rd minute.

The U19s are next in action when they visit Sevilla in the UEFA Youth League on Wednesday.