U19 Fact Check: Looking to bring the silverware back to Dortmund 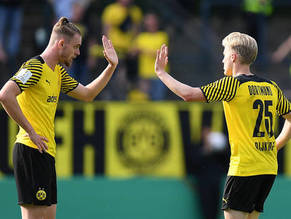 It is the penultimate — and most important — competitive match of the season: Borussia’s U19s face Hertha BSC in the play-off final of the German Championship in Berlin on Sunday. “We experienced last week in Potsdam how bitter it is to lose a final and have to watch the other team celebrate,” says team captain Dennis Lütke-Frie. “Now we want to win this title more than ever and crown an outstanding season.” Here are the facts and figures surrounding the game.

The Stadion auf dem Wurfplatz is near to the Olympiastadion in Berlin’s Olympiapark and has a total capacity of 5,400 (including 1,100 seats). It was opened in 2004 and is the home ground of Hertha BSC’s second team as well as the U19 and U17 teams.

BVB and Hertha BSC have only met once before in a German Championship play-off match. In 2018, the Berlin team beat Borussia 4-0 in the first leg of the semi-final. In the second leg, they were 3-0 down but benefited from a long interruption due to stormy weather and scored the redeeming goal (3-1) shortly before the final whistle (to win 5-3 on aggregate). They went on to beat FC Schalke 04 (3-1) in the final in Oberhausen. It was Hertha BSC’s only championship title to date.

BVB have already won the German U19 Championship eight times and will play their tenth final on Sunday. The Black and Yellows go into the match as defending champions. They beat VfB Stuttgart 5-3 in Grossaspach in 2019 after trailing 3-1 at half time. There has been no championship final since then due to the pandemic.

Mike Tullberg has been Borussia’s U19 coach since June 2020 after coaching the U23s in the 2019/20 season. As a player, the Dane played professionally in Italy for Reggina, in Scotland for Heart of Midlothian and in Germany for RW Oberhausen. He was forced to end his career at RWO due to long-term injuries. He then coached Oberhausen’s U19s in the Bundesliga and, after a stint coaching in his native Denmark, returned to Germany in 2019. “He’s a talent developer,” explains Edwin Boekamp, head of BVB’s youth section, when asked about the U19 head coach’s working methods. “Mike is obsessed with detail, he’s thinking about football and his players from morning to night.”

Michael Hartmann played 153 Bundesliga games for Hertha BSC until 2005. The former international ended his career at Hansa Rostock. He went on to work as a youth coach at Hansa and led the U19s to the German Championship in 2010. For the past nine years he has been back at Hertha BSC as youth academy coach. With Hertha he won the DFB Juniors Cup in 2015 and the German U19 Championship in 2018. After the final against BVB he will say goodbye to Berlin and move to Bayern Munich to coach the U17s.

Mike Tullberg has all his players available. Dennis Lütke-Frie made his comeback in the Cup Final after groin surgery, and Samuel Bamba is available for the starting line-up after a 45-minute stint against VfB Stuttgart. The entire squad will travel to Berlin. Hertha BSC also have no serious absences, enabling both coaches to field their best players.

Format and how to watch

If the match is not decided after 90 minutes, 30 minutes of extra time (two halves of 15 minutes) will be played. If there is still no winner after that, the German champion will be determined in a penalty shoot-out. The final will be broadcast live on SKY Germany (from 12:45 CET).

A joint dinner on Tuesday is an opportunity to say goodbye to those players making the transition from the juniors to the seniors. We already know that goalkeeper Silas Ostrzinski, Dennis Lütke-Frie and Bradley Fink will move up to the U23s. And Jamie Bynoe-Gittens, despite being eligible for the U19s for another year, will join Borussia’s professional squad, as will Göktan Gürpüz, who has signed a professional contract. The futures of Lion Semic and Colin Kleine-Bekel have not yet been decided. The season finishes with the Westfalenpokal final on Wednesday at Schalke (kick-off 18:30 CET). “We will play the game with a mixture of U18 and U17 players,” explains Mike Tullberg in announcing a completely different starting line-up compared to the championship final.