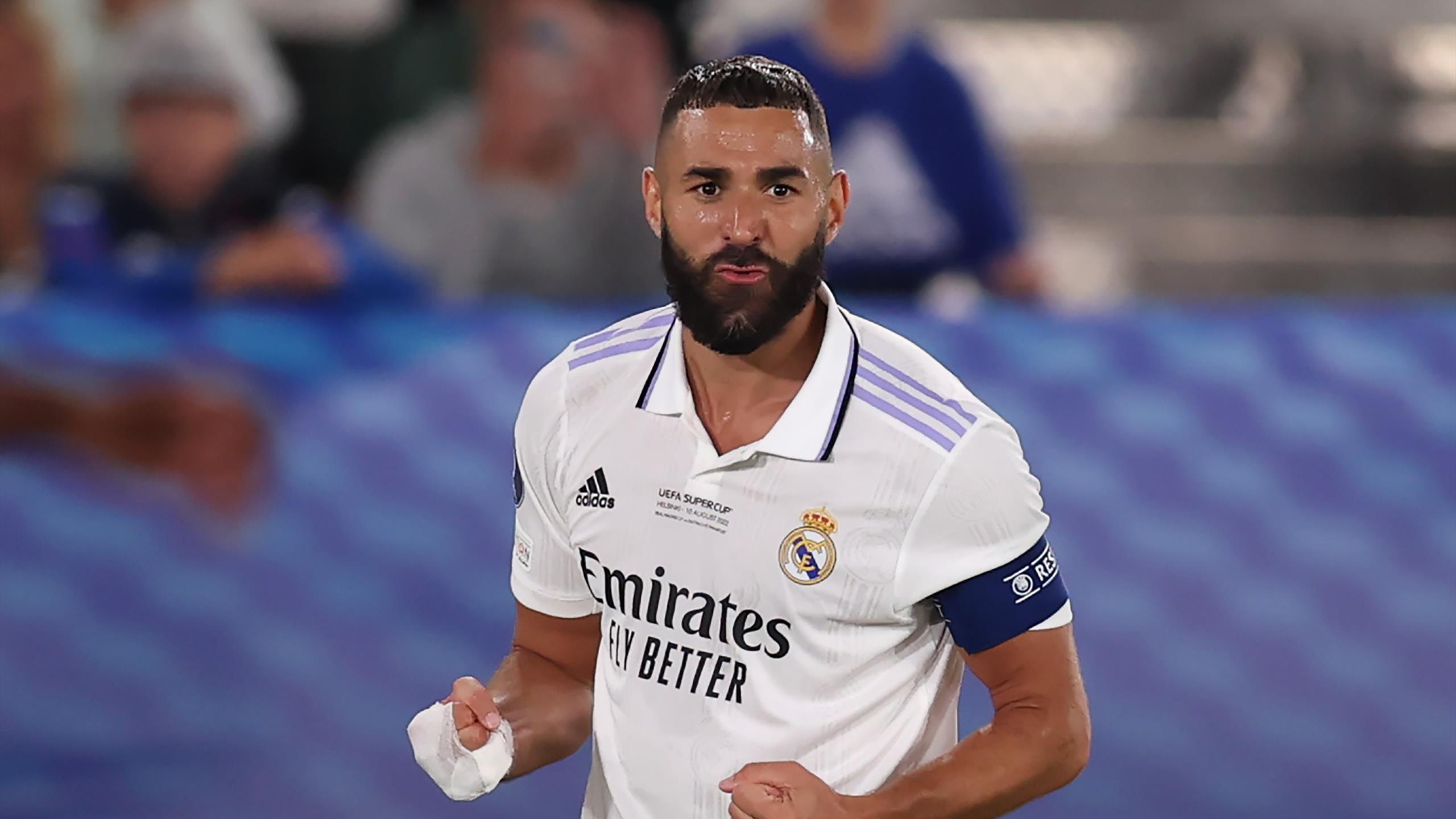 Karim Benzema struck a landmark goal as Real Madrid lifted the UEFA Super Cup for the fifth time in their history with a comfortable 2-0 victory over Eintracht Frankfurt at the Olympic Stadium in Helsinki.

The French forward, who was the inspirational force behind Real’s Champions League triumph last season, netted the second goal of the night 25 minutes from time to secure the trophy and move him into second spot on Madrid’s list of all-time leading goalscorers.

Los Blancos had dominated for long spells and took the lead on 37 minutes when David Alaba touched home Casemiro’s nod back after the Bundesliga outfit had failed to deal with a corner.

The German side had been beaten 6-1 by Bayern Munich in their Bundesliga opener and looked a shadow of the team that had fearlessly charged to Europa League glory last season.

Casemiro was unlucky not to double Real’s lead earlier with a sizzling strike off the crossbar before Benzema made the most of good work from Vinicius Junior to somehow squeeze a shot through Kevin Trapp.

The victory sees Carlo Ancelotti claim a record fourth Super Cup as coach and sets Real up perfectly for the start of their La Liga title defence at Almeria on Sunday.

Frankfurt will lick their wounds and aim to bounce back from their nightmare start to the Bundesliga season with a trip to Hertha Berlin on Saturday.

Real and Benzema shine on the big stage once again. Benzema is the favourite for the 2022 Ballon d’Or and he gave a timely reminder of his credentials with another match-clinching goal that will create headlines for what it means in the context of Real Madrid’s history.

The evergreen 34-year-old was pivotal to Los Blancos’ league and European Cup double last term and on this evidence is showing no sign of letting up just yet. Real are looking strong on the eve of the new campaign as they bid to once again upset the tipsters as dark horses for yet another Champions League crown. They have added to the reliable old guard with some exciting signings and gave late cameos to Aurelien Tchouameni and Antonio Rudiger.

All looks rosy in Ancelotti’s garden right now as he continues to add silverware to the club’s trophy cabinet and his own glittering CV.

Vinicius Junior (Real Madrid). The Brazilian continues to thrive and has developed a particularly productive understanding with Benzema. It was his run and shot that led to the corner that resulted in the opener before another charge down the flank ended with an assist for the Frenchman to clinch the trophy.

14’ – EINTRACHT FRANKFURT CHANCE! The Bundesliga side open Real up again but Daichi Kamada can’t do enough with his left-foot strike to beat Courtois.

18’ – REAL MADRID CHANCE! Tuta produces a magnificent block on the line to deny Vinicius Jnr after Real had carved the German side open down the right through Valverde and Benzema.

37’ – GOAL! – Real Madrid 1-0 Eintracht Frankfurt. The German side fail to deal with a right-wing corner and Alaba is left with a simple task of rolling Casemiro’s nod back into a gaping net.

41’ – REAL MADRID CHANCE! Benzema stabs just wide from 15 yards out after taking Kroos’ driven ball from the right in his path and letting fly with his right foot.

54’ – REAL MADRID CHANCE! The Champions League winners patiently probe before unlocking the German defence. Vinicius thinks he’s in when he collects a ball from the left, but his deflected strike is well blocked by Trapp.

61’ – REAL MADRID CHANCE! Casemiro unleashes a dipping 20-yard strike that clips the bar after a neat ball inside from Kroos.

64’ – EINTRACHT FRANKFURT CHANCE! Knauff drifts in from the right but sees his low shot with the outside of his right foot well smothered by Courtois at the near post.

Courtois has saved all 19 shots on goal he has faced from opposition players in his four finals with Real Madrid in domestic and UEFA competitions.

Benzema becomes Real’s second all-time top scorer in all competitions with 324 goals, surpassing Raúl (323). Only Cristiano Ronaldo (450) has scored more than the Frenchman for Los Blancos.