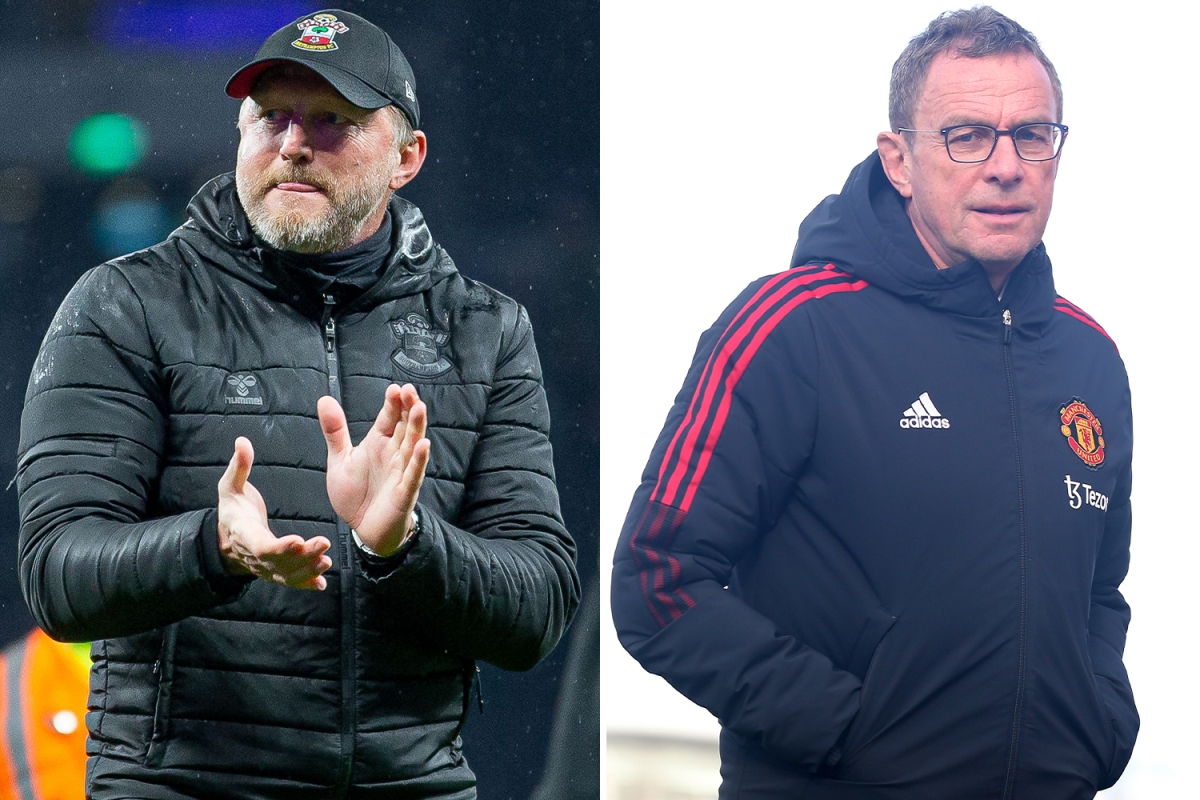 RALF RANGNICK and Ralph Hasenhuttl served up some tasty results during their time together at RB Leipzig, which began with a tactical use of salt and pepper.

The old colleagues face off against each other in the lunch-time kick-off on Saturday as Rangnick’s Manchester United host Hasenhuttl’s Southampton.

It is nearly six years on since Rangnick, then director of football at Leipzig, finally convinced Hasenhuttl to become the club’s manager over dinner in the picturesque town of Lofer in the Austrian Alps.

Rangnick wanted to hire Hasenhuttl the year before, impressed with how he had taken underdogs Ingolstadt to the top flight. He saw a kindred spirit in the way the Austrian played all-action, pressing football and his desire to develop young players.

The offer was declined as Hasenhuttl felt his Ingolstadt mission was not over and then masterminded an 11th-placed finish for the newly-promoted side.

But, with a little help from the table seasoning, Rangnick got his man a campaign later and together they blew the Bundesliga away in the following season.

Their energy helped propel Leipzig, then the hated upstarts of German football, all the way to a second-placed finish behind champions Bayern Munich.

Timo Werner was the star of the show, blasting 21 league goals, along with midfielder Naby Keita, prompting future moves to the Premier League for around £100million combined.

For instance, Rangnick had Leipzig’s players have their blood tested on arrival at the training ground to gauge how tired their muscles were and whether they were in need of rest.

He would also put motivational quotes around the training ground from inspirational figures which is something Hasenhuttl has continued at Southampton.

The citations are switched up a few times a season at Saints’ Staplewood campus.

At Leipzig, we did a lot of things that other clubs didn’t do

But current examples include Vincent van Gogh’s observation that “Great things are done by a series of small things brought together”, as well as Malcolm X’s assertion that “The future belongs to those who prepare for it today”.

Reflecting on the unconventional techniques Rangnick introduced, Hasenhuttl said: “At Leipzig, we did a lot of things that other clubs didn’t do.

“We turned every stone around and tried everything because it was the only chance for us at that time. We were a promoted team and came second in the end.

“This is one way to go. As a manager it’s very important to learn things, to try them. Does it work or is it too much? Do you need this in the future? If not, leave it away.

Success brought new challenges and in his second season at Leipzig, Hasenhuttl could not reach the same heights as the previous campaign.

The extra matches from participation in the Champions League took their toll.

While a central defensive partnership of teenagers Ibrahima Konate and Dayot Upamecano, now of Liverpool and Bayern respectively, had much potential but was raw.

It has been suggested that Hasenhuttl snubbed the chance to extend his contract during the festive period of that campaign, which coincided with links of a switch to Bayern.

Results began to tail off in the second half of the season, reports of tensions behind the scenes emerged and CEO Oliver Mintzlaff was said to be keen on a change in the dugout.

Rangnick supported Hasenhuttl but in May 2018, with talk that Julian Nagelsmann was being lined up as his replacement, Hasenhuttl decided to walk away despite having 12 months left on his contract.

Looking back now, Hasenhuttl said he felt he needed to move on to branch out from the limitations that Leipzig’s style imposed and shed his tag as a pressing-obsessed boss.

He explained: “I had the feeling in the end that I had to go my own way and develop my managing style even more without being too, I don’t want to say one-dimensional, but I had the feeling there were more parts of the game I wanted to develop.

“We had a home game against Bayern Munich when we won 2-1 and afterwards there was speaking (within the club) about there not being enough RB philosophy in that game.

“I couldn’t agree, so it was important for me to step out and go my own way and to learn other things also.

What he’s achieved at Southampton is great, just great

Two years on from their tactical talks involving condiments, Hasenhuttl and Rangnick’s working relationship may have had a sour end.

Yet the two are understood to swap messages from time to time and Rangnick sent Hasenhuttl a missive of congratulations when he was appointed Saints boss.

On their relationship, Rangnick said: “I’ve known him for six or seven years, he has developed in those years, it’s obvious.

“He did a great job at Leipzig. What he’s achieved at Southampton is great, just great.”

After all they have been through, it is good to see there is no saltiness between the two Ralphs.