Real Madrid ready for battles of next few months

UEFA is offering a rare, access-all-areas glimpse into the world of the loneliest person on any given Champions League matchday: the referee.

“Man in the Middle” is a new four-part series produced and streamed by UEFA that allows us a behind-the-scenes look at match officiating at the very highest level.

The first episode centres on the 2018-19 Champions League campaign, the season that VAR was used in the competition for the very first time and how top referees like Damir Skomina, Bjorn Kuipers and Clement Turpin coped with it.

We’ve watched the first episode and marvelled at just how close to the man in the black (or luminous yellow) we’ve been allowed to get by the UEFA cameras. Here are the main takeaways:

History was made in Amsterdam

⚽ Meet some of the #UCL referees and take a look at some of the biggest talking points brought by the introduction of VAR… pic.twitter.com/P1XYpROwxF

The main beneficiary of the first ever VAR intervention staged in the Champions League was Thibaut Courtois. It came after the Real Madrid goalkeeper made a colossal handling error that led to Ajax stealing a goal in the round-of-16 first leg encounter in Amsterdam.

A timely check for offside in the build-up let Courtois off the hook, much to the Belgian shot-stopper’s obvious relief. That relief was to be short-lived, however, as Ajax overcame the defending champions and progressed to the semifinals.

Referees can’t get a moment’s peace 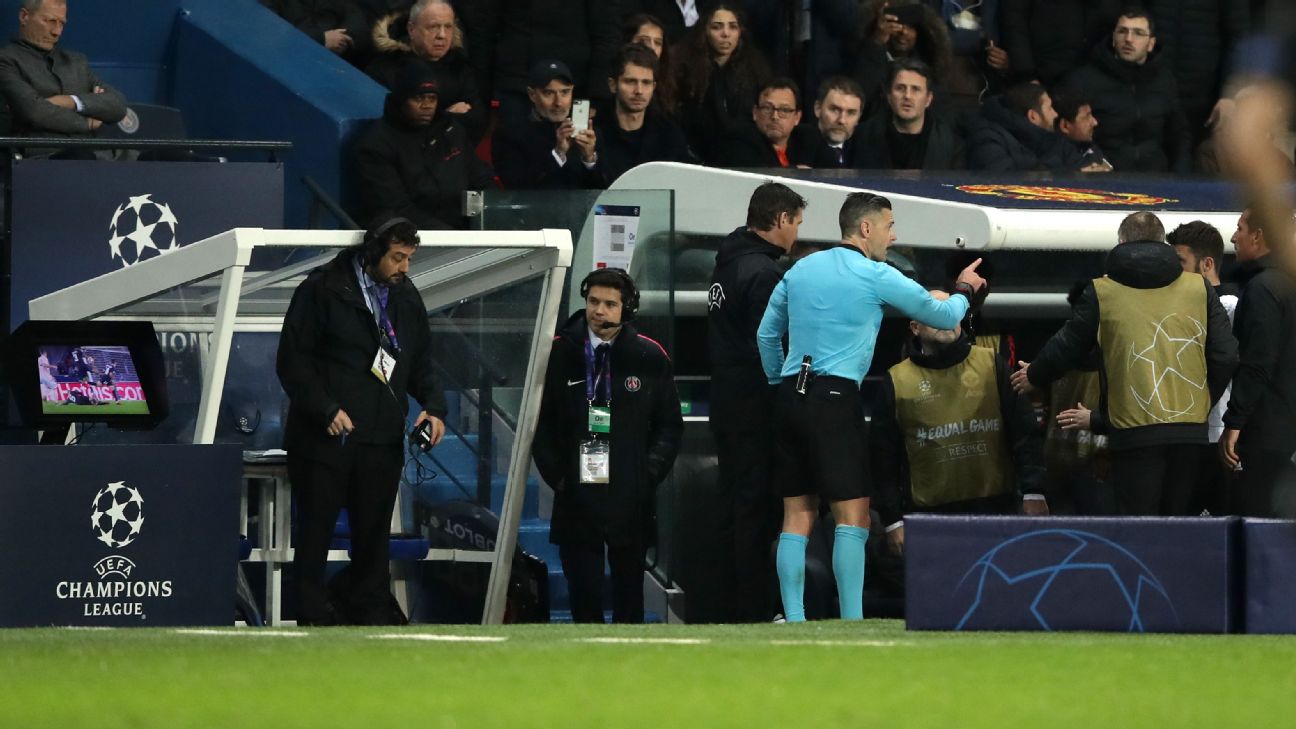 With the round-of-16 tie between Paris Saint-Germain and Manchester United level on aggregate and with the second leg in Paris approaching extra time, a possible handball from Presnel Kimpembe offered the visitors a chance of a stoppage-time penalty that would send them through.

Experienced referee Skomina was urged to review the dramatic incident on the pitchside monitor, only to find himself harangued by agitated players and staff, all shouting at the officials and craning their necks to watch the replays.

Marcos Rojo could be seen yelling from the dugout as United coaches Ole Gunnar Solskjaer and Mike Phelan nervously pace around the technical areas, crowding the referee as he attempted to rule on an extremely pivotal decision while being watched live by millions around the world.

After being besieged for what felt like an age, Skomina quickly reached the end of his tether. “Please, I need to be alone,” came the plaintive plea from the Slovenian official. He duly ruled in favour of United, and Marcus Rashford‘s spot kick sent them into the quarterfinals.

A ref’s decision is not always final 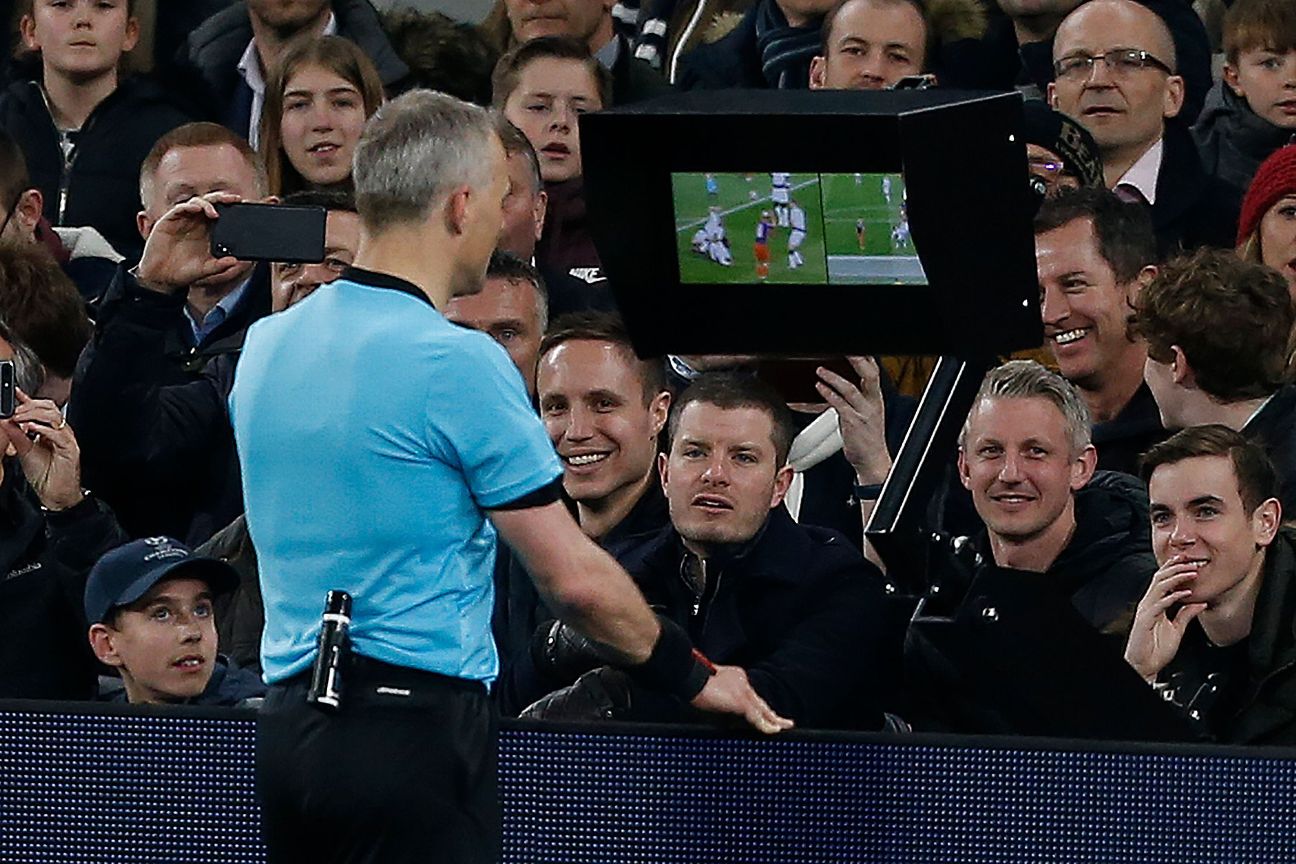 Referee Kuipers was initially adamant in his decision not to award a penalty when the ball inadvertently struck Danny Rose‘s hand just 11 minutes into Spurs’ 2018-19 quarterfinal first leg against Manchester City.

The Dutchman admitted that he instantly ruled out the possibility of a penalty and was reluctant to even check the incident again, so sure was he that a corner was the correct decision.

However, his VAR team would not let the matter lie and eventually talked Kuipers into reviewing the replays, only for the penalty to be given (and subsequently missed by Sergio Aguero).

Son Heung-Min went on to score the only goal of the game, and Kuipers can be seen after the final whistle thanking his team for convincing him to make another check.

GOATs don’t get any special treatment

🎬 Did you see the trailer for 𝗠𝗮𝗻 𝗶𝗻 𝘁𝗵𝗲 𝗠𝗶𝗱𝗱𝗹𝗲 yet?

⏳ Coming Monday, UEFA’s new series offers a view behind the scenes in the lives of some of Europe’s top #UCL referees… pic.twitter.com/QgTVxpuvnG

The first episode spends a lot of time covering Kuipers, and no wonder. The Dutch official is not a man to be trifled with, even giving Lionel Messi a dressing down during the first leg of Barcelona‘s semifinal against Liverpool.

With Barca winning 3-0 up at Camp Nou, Messi still tries to engage in some time-wasting: not on Kuipers’ watch.

Messi or Maradona? Is Pele Brazil’s undisputed best? Dempsey or Donovan from the U.S.? Our writers nominated candidates and we want readers to decide! Read

“Messi! Why? Come on! Show them some respect!” Kuipers shouts, pointing to the ‘Respect’ logo on his sleeve. “Go! Every time you do it. Come on! Why do you do it? Go now!”

Of course, Liverpool would go on to upset the odds by winning the second leg at Anfield 4-0 and reach the final.

Even more impressively, Kuipers later reveals he limped through 86 minutes of that match, as he was carrying a muscular injury.

Refs thrive under pressure on the biggest occasion

There’s an old maxim in the refereeing world that you need to be ready to make a decision from the very first whistle, and Moussa Sissoko certainly put that to the test mere seconds into the 2018-19 Champions League final.

The Tottenham midfielder handled a ball inside his own penalty area less than a minute after kick-off, forcing referee Skomina and his team to run a VAR check before they’d even got comfortable.

After a “very high hand” was flagged, Skomina pointed to the spot and awarded Liverpool the penalty with just 22 seconds on the clock. Mohamed Salah stuck it away as the Reds went on to win 2-0 in the Spanish capital.

Currency really is different in Europe

When it comes to the traditional prematch coin toss to decide which team kicks off, the two captains are not asked to pick “head or tails,” but rather “yellow or blue”.

Suddenly we’re questioning everything we previously held to be true about the Champions League.