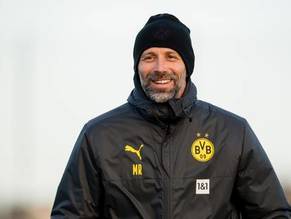 Borussia Dortmund will take on a direct rival for the Champions League places when they welcome third-placed Bayer Leverkusen to SIGNAL IDUNA PARK on Sunday (15:30 CET).

Two weeks have passed since the last Bundesliga match, when BVB ran out 3-2 winners away to TSG Hoffenheim. Marco Rose has used the time since to work on different topics with his players at the training ground in Brackel. “We’ve had two very good weeks of training,” reflected the BVB coach, who continued: “We have been able to train a lot and will take a good feeling from the last 14 days into the match with us.” The topic of tackling has been a particular focal point on the training pitch. “Seeking the challenges, going into the challenges and coming out of them on top. We identified this as a problem area. Now it’s important to show it on the pitch on Sunday too.”

Giovanni Reyna, who has not made an appearance for BVB since the end of August due to injury, has taken advantage of the past fortnight to edge closer to a return to the team. “I’m happy because Gio has had two good weeks of training. Seeing him again and having his qualities again is just great and important for us,” remarked Rose, who in light of Reyna’s several months on the sidelines was quick to add: “We need to see how long he can cope with after this long time out.” The coach is expected to be without the trio of Erling Haaland, Mats Hummels and Emre Can against Leverkusen. “All three have not yet returned to team training; it’s going to be more than close. Mats cycled today; in his case we need to see whether there’s perhaps a chance of a squad place.”

Nonetheless, the objective for Sunday remains clear: improve the points tally and work towards improving the table situation against a direct rival for the Champions League places. “Above all else, we want to produce a good performance against an opponent that has good footballers and a lot of dynamism in its ranks. I’m expecting it to be a top match and we want to win it,” said Rose, who added that Leverkusen have a very good team and deserve to be up in third place. The coach called upon his own players to defend “well, diligently and with intensity”, adding: “We need to be really good off the ball and be tidy in possession, without giving it away carelessly.”

BVB TV by 1&1: The press conference prior to the Leverkusen game