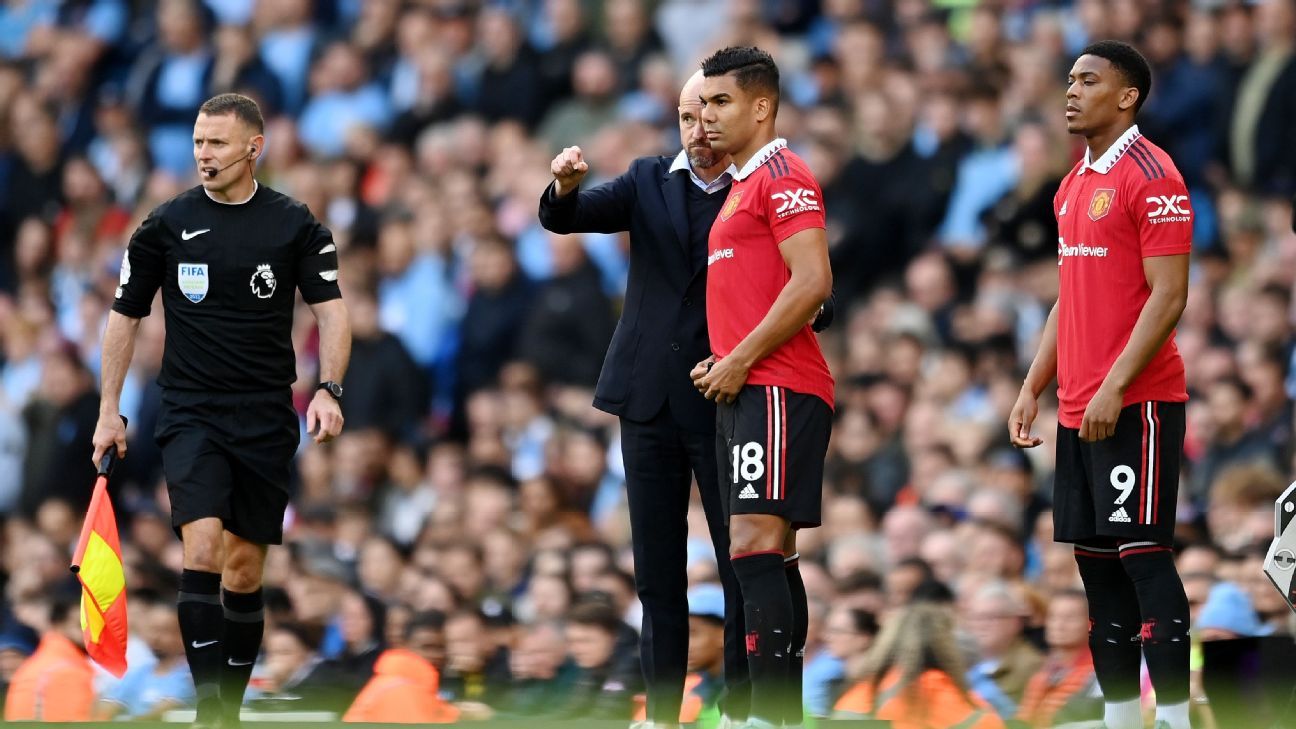 European club football is back in full swing following the international break. We saw a couple big derbies in the Premier League — Arsenal beating Tottenham Hotspur and Manchester City seeing off Manchester United — while Barcelona now sit over Real Madrid in LaLiga standings. Meanwhile, Liverpool and Internazionale are all out of sorts.

Here’s what you need to know about the weekend from Europe’s biggest leagues.

Jump to: Talking points | Best goals | Teams in trouble | MVP of the Weekend

Manchester United not convinced with Casemiro?

There were plenty of issues to address for Manchester United following their 6-3 derby humiliation loss to Manchester City at the Etihad, but one that only Erik ten Hag can answer is his ongoing reluctance to use Casemiro at the heart of midfield.

The Brazil international arrived at United in a £60 million transfer from Real Madrid in August and was supposed to be the answer to the team’s problems in the defensive midfield area.

But the 30-year-old still hasn’t started a Premier League game for his new team after being named on the bench for the clash against City. Casemiro was eventually thrown on in the 59th miniute when United were 4-1 down and in purely damage limitation mode.

His 31 minutes on the pitch took his number of Premier League minutes for United to just 82 since arriving from Real in the wake of the 4-0 defeat at Brentford in August. Despite his world-class pedigree, Casemiro has started just once — against Real Socieded in the Europa League — since leaving the Santiago Bernabeu.

Ten Hag wanted Barcelona’s Frenkie de Jong this summer and when United finally abandoned that pursuit, they tried to seal a deal for Juventus midfielder Adrien Rabiot before turning to Casemiro.

So the question that Ten Hag has to answer is whether he really wanted Casemiro or if he was the best option available at the time.

Based on the amount of time he has used him so far, it would seem that Ten Hag is still to be convinced by Casemiro’s worth to the team. — Mark Ogden

Barca rise to top in Spain as Clasico countdown begins

There is a new leader in LaLiga after Barcelona beat Mallorca on Saturday before Real Madrid’s 100% winning start to the season was ended by Osasuna on Sunday.

Barca were not at their best away at Mallorca but did enough in both boxes to seal a narrow 1-0 win to leapfrog Madrid courtesy of their superior goal difference. Robert Lewandowski’s 12th goal of the season in all competitions, a brilliant solo effort, was enough to secure the points, coupled with a two good saves from goalkeeper Marc-Andre ter Stegen at the other end.

“We did the bare minimum, but it is a huge win ahead of a really tough run of games,” said Ter Stegen, who has now not conceded a goal in 534 minutes in LaLiga.

Madrid lost Thibaut Courtois to injury but welcomed back Karim Benzema this weekend and looked set to retake their place at the top when Vinicius Junior gave them a fortuitous first half lead. Kike Garcia’s header drew Osasuna level at the Santiago Bernabeu, though, before Benzema smashed the bar with a late penalty.

Madrid remain level on 19 points with Barca but their 100% record is now gone. Both sides remain unbeaten and the countdown is on for the Clasico, with the two teams set to meet at the Bernabeu in two weekends time. Before then, Barca host Celta Vigo and Madrid travel to Getafe — Marsden

We have been hoping for a genuine title race in Germany after almost a decade of Bavarian superiority, but the end of the international break brought a heavy dose of the status quo as league leaders Union Berlin lost, Borussia Dortmund lost 3-2 at FC Cologne (let’s give credit to Dejan Ljubicic for his elegantly curled game winner) and Bayern Munich shirked off a turgid run of domestic form for their first Bundesliga win since Aug. 21 to thump eternal hopefuls Bayer Leverkusen 4-0.

Julian Nagelsmann’s side were firing early and often on Friday and seemingly sending a message to the rest of the league with their comfortable victory. Leroy Sane and Jamal Musiala scored under little duress inside the opening 20 minutes before Sadio Mane added a third before half-time to really snuff out any hope of a competitive game. Mane, the former Liverpool forward, had a second disallowed due to a foul but Thomas Muller would round out the easiest of games — James Tyler

Inter Milan are in a funk

Four defeats in their first eight Serie A matches this season: Inter Milan are going through their worst start of a season since 2011. Their loss against AS Roma and Jose Mourinho (who was suspended and watching from his van outside the ground!) happened once again after the Nerazzuri scored the first goal. Their inability to defend a lead which happens time and time again under Simone Inzaghi was on display again on Saturday.

They were 1-0 up but let the Roman side come back through Paulo Dybala (who was heavily linked with Inter in the summer) and then Chris Smalling on a set piece, which is also a weakness for Inter. They have numerous problems, among them that Romelu Lukaku is still not back from injury and Samir Handanovic’s goalkeeping ability has diminished as we saw on the first goal.

Inter have to react now as early as in midweek against Bayern Munich in a huge Champions League clash. They are currently 9th in the table in Serie A, eight points behind the leaders Napoli. Inzaghi is under more and more pressure. — Julien Laurens

What a way for Conor Gallagher to score his first Chelsea goal. A last-minute winner from 20 yards against the club he did so well for on loan last season. It was impressive that he managed to find enough self-restraint to stop himself from celebrating against former team Crystal Palace.

As important as the goal was, it was just as vital that Gallagher made an impression on his new manager, Graham Potter. The midfielder is looking to build on his season on loan at Palace and goals like that can only help him get more chances at Chelsea – Rob Dawson

Real Sociedad’s 5-3 win away at Girona was the game of the weekend in LaLiga, and Rodrigo Riquelme’s 23rd minute strike for the losing side — collecting the ball and nutmegging La Real’s Martin Zubimendi before firing into the top corner from distance — was a genuine goal of the season contender.

What a goal by Rodrigo Riquelme! pic.twitter.com/zTrCAmsTf4

Riquelme, 22, is a highly rated Atletico Madrid academy product who shone on loan at Mirandes in the Segunda Division last season and is already excelling having taken a step up with another loan at Girona this campaign. This was a first top-flight goal for the creative midfielder, but on this evidence, there will be plenty more to come. — Alex Kirkland

A family affair goal at Lorient

Imagine celebrating your 20th birthday on Saturday and the next day, you score the winning goal, your first one in Ligue 1 in only your eighth appearance — only at the club where your uncle is the manager! That’s what happened to Lorient youngster Theo Le Bris this weekend. The promising attacking midfielder made his family proud by being decisive against Lille.

The dream start of the season continues for the two Le Bris and Lorient. They are currently third in the Ligue 1 table, only one point behind Marseille in second and three behind Paris Saint-Germain at the top. — Laurens

Liverpool on the brink of crisis

It’s all relative, of course — ask any Leicester City fan right now and they’d happily swap their situation at the bottom of the Premier League for the problems that Liverpool are experiencing — but no team in the Premier League, and arguably in any major European league, is underperforming quite like the Reds this season. Jurgen Klopp’s team are already 11 points behind leaders Arsenal after dropping more points in Saturday’s 3-3 draw at home to Brighton & Hove Albion and hopes of a title challenge are surely already over.

Liverpool have won three games all season. One was a remarkable 9-0 rout of Bournemouth, the other two were a 2-1 Anfield win against Newcastle United with a winner eight minutes into stoppage time and a 2-1 Champions League victory at home to Ajax Amsterdam, this time with an 89th-minute winner.

The positives are the two late winning goals, but Liverpool have conceded first in seven of their nine games in all competitions this season, and their defending has been woeful on several occasions. Big summer signing Darwin Nunez is struggling to impress, Mohamed Salah is blowing more cold than hot and, but for five goals and three assists from Roberto Firmino, Liverpool would be in a much worse situation.

They are not in crisis just yet, but Liverpool’s next two league games are away at leaders Arsenal and then home to champions Manchester City. There could be trouble ahead. — Ogden

Stuttgart still searching for a win

It’s hard to say how much was expected from VfB Stuttgart this season, especially after scraping their way to a 16th-place finish in the Bundesliga last year, followed by a modest transfer window. (Out went their two best players, midfielder Orel Mangala and lanken forward Sasa Kalajdzic, to the Premier League and in came some modest replacements like Arsenal flop Konstantinos Mavropanos and so-so defender Dan-Axel Zagadou.) And yet, they’re still searching for a first win since July 29, coming agonizingly close on Saturday only to lose to a last minute goal away to VfL Wolfsburg.

You had to feel for them given the way they battled against a better team, taking the lead for barely a minute via Sehrou Guirassy’s hooked close range finish before conceding two goals and leveling on the cusp of half-time with a point blank Mavropanos header. Yet they lacked the composure to see things through and after some desperate second half defending, Yannick Gerhardt had an open goal header to take all three points and continue Stuttgart’s futile run of form.

Stuttgart were perhaps smart to persist with Pellegrino Matarazzo as manager given the Bundesliga’s culture of coaching swaps, but you have to wonder how long they keep going on this course given the last of tangible results. — Tyler

There were plenty of stellar performances for Manchester City against Manchester United but Phil Foden’s was the best of the bunch. Combined with Erling Haaland, Kevin De Bruyne and Jack Grealish, he helped tear United apart, particularly during a devastating first 45 minutes. It was 4-0 at half-time but it could have quite easily been 10. Foden has never reached 10 Premier League goals in a season but has already got five after just eight games. His talent has never been in doubt but this could be the year that he begins to rack up big numbers of goals and assists — Dawson