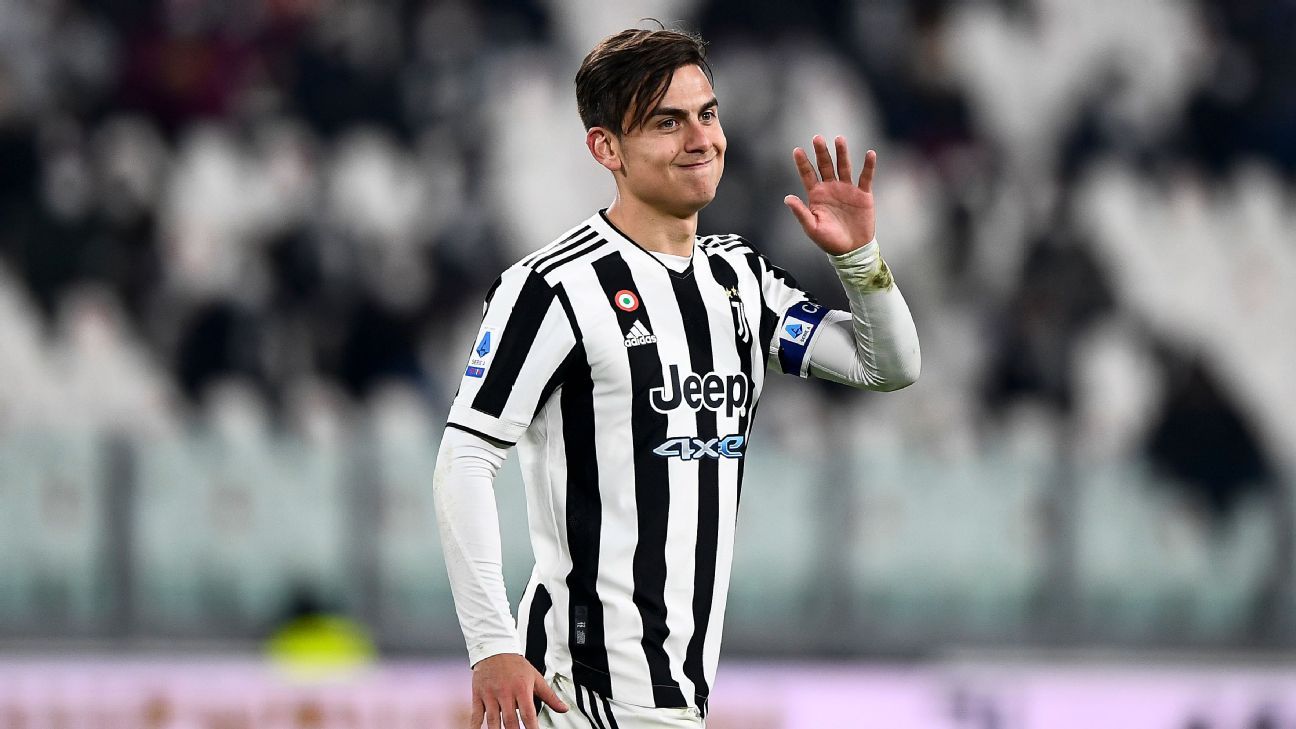 Dybala, 28, is out of contract in the summer and has yet to agree terms over a new deal. The Argentina international is set to have some competition for his place once Juve complete the €75 million signing of Dusan Vlahovic from Fiorentina in the coming days.

Inter Milan are also keen on Dybala, with former Juventus director Beppe Marotta now at the club, and would be able to offer him the chance to continue his career in Serie A.

However, Manchester City are now interested as well. The club are close to sealing an €18m deal for 21-year-old River Plate forward Julian Alvarez, sources have told ESPN, but Dybala would offer a more immediate option.

09.57 GMT: Erling Haaland has said it is time to “move on” from comments he made earlier this month about Borussia Dortmund pressuring him to made a decision over his future.

Haaland, 21, is expected to leave Dortmund at the end of the season, with top clubs in the Premier League as well as Barcelona, Real Madrid, Bayern Munich and Paris Saint-Germain interested in his signing, according to ESPN sources.

“I don’t really want to say too much about it, but I felt it was time for me to say something.” Haaland said, in a interview with selected Bundesliga rights holders about why he felt he needed to publicly address the situation.

“A lot of others were speaking — so that was it. Now, I don’t want to say too much. I said what I said, and now we move on.”

09.40 GMT: Palmeiras are considering slapping a €100m release clause on 15-year-old sensation Endrick, according to the Brazilian publication Lance, amid interest from Real Madrid, Barcelona and a host of other top European clubs.

Endrick — who has shone in recent months at U-17 and U-20 level, with clips of his goals going viral — is still too young to sign a professional contract, however, and Palmeiras would only be able to reach such an agreement when he turns 16 next July.

Marca reports that, with Real Madrid leading the race to sign him, an offer of €30m-€40m now would be necessary to put a deal in place for an obligatory purchase in two-and-a-half years time, when Endrick is able to leave Brazil at 18.

09.18 GMT: Jesse Lingard is growing increasingly unhappy at his treatment by Manchester United with talks over a possible loan move to Newcastle stalled and on the brink of collapse, sources have told ESPN’s Rob Dawson.

Lingard, who will be out of contract in the summer, wants to move to St James’ Park until the end of the season. He remains disappointed United have refused to enter negotiations with either Tottenham or West Ham this month because they are seen as rivals for a place in the top four.

Sources have told ESPN United are asking Newcastle to cover Lingard’s wages, pay a £2.5m loan fee and another £12m if they avoid relegation. The overall package would end up costing Newcastle more than £15m.

There is concern in Lingard’s camp that Newcastle could soon call time on their pursuit and turn their attention to Tottenham midfielder Dele Alli.

Sources have told ESPN that United have already turned down an offer from Newcastle for Lingard which included a £6m loan fee despite agreeing to loan Anthony Martial to Sevilla for free.

There is a suspicion among Lingard’s representatives that he is being treated differently because he has so far refused to sign a new contract and will be able to leave Old Trafford for nothing on June 30.

08.42 GMT: Valencia have accepted Atletico Madrid’s latest offer for Daniel Wass, according to multiple reports in Spain, with the move close to being made official.

Both Marca and AS agree that a deal has been struck for a fee of around €3m, with Marca putting the figure at €2.7m plus variables.

Wass, 32 — a versatile player who is nominally a midfielder but has frequently played for Valencia at full-back — is available on the cheap with his contract at Mestalla expiring this summer.

Atletico have been keen to strengthen at full-back after the sale of Kieran Trippier to Newcastle, and are also reportedly close to signing Reinildo Mandava from Lille.

Valencia, meanwhile, are working against the clock to sign Ilaix Moriba as a replacement for Wass, according to COPE radio,

Negotiations are at an advanced stage and the 19-year-old, recently competed at the Africa Cup of Nations with Guinea, could return to Spain six months after joining Leipzig from Barcelona.

Valencia have approached Leipzig to get Moriba on loan for the remainder of the season. Moriba has made just six appearances in all competitions for Leipzig since his €16m transfer from Barca.

08.00 GMT: Tottenham Hotspur are expected to make an improved offer for FC Porto winger Luis Diaz after having an opening bid of €45m plus add-ons rejected, sources have told ESPN’s James Olley.

Porto have a strong negotiating position based on the presence of an €80m ($90.23m) release clause in the 25-year-old’s contract but there is some confidence at Spurs that a deal can be done below that figure.

Tottenham are planning to increase their bid but the clubs remain some way apart in their valuations as negotiations continue, forming one aspect of what promises to be a busy few days at Spurs.

Antonio Conte has stressed the urgency for reinforcements this month rather than waiting until the summer and has identified Diaz, a Colombia international with 16 goals from 26 games across all competitions this season, as a key part of his rebuild.

– Southampton are so keen to keep forward Armando Broja that they’re prepared to smash their transfer record to lure him away from Chelsea on a permanent basis. TEAMtalk believes that Broja, who has scored five goals in 18 Premier League games this season during his loan spell on the south coast, has impressed the Saints coaching staff so much that they’re willing to part with £25m, more than they paid Liverpool for Danny Ings, to get him. Chelsea boss Thomas Tuchel has a number of attacking options at Chelsea and could be willing to let Broja leave.

– PSV Eindhoven winger Cody Gakpo ignored admiring glances from Marseille last summer to stay in the Netherlands and his decision looks to have paid off, with Arsenal, Liverpool and Manchester City now in pursuit of the 22-year-old, according to Footmercato. The left-footed attacking player had previously been monitored by Bayern Munich, but the Germans are said to have cooled their interest. Arsenal would appear to be the keenest club, as they look to replace Pierre-Emerick Aubameyang, but they would struggle to match the lure of Liverpool or Manchester City.

– Talented Major League Soccer goalkeeper Gabriel Slonina is attracting interest from the Premier League and could be on the verge of €10m move from the Chicago Fire, according to Fabrizio Romano. Last year, Slonina became the youngest goalkeeper to start an MLS league game, and his subsequent clean sheet was also a record. Yet to make his full debut for the United States, Slonina has been compared to Gianluigi Buffon, and the 17-year-old has enjoyed a remarkable rise. It hasn’t gone unnoticed. As well as two unnamed Premier League sides, Slonina is also said to be attracting interest from the Bundesliga, Serie A and Atletico Madrid in Spain.

– Following reports that Chelsea were monitoring Niklas Sule, now it appears that Newcastle United have joined the race too. On Wednesday, Bayern CEO Oliver Kahn confirmed that the German will leave the club in the summer. That’s according to TEAMtalk, which suggests that Sule won’t leave until the summer when he’ll be a free agent. However, Chelsea and Newcastle are keen to land the centre-back before the end of the January transfer window, even if it means parting with £32m.

– Manchester City are close to signing Hungarian wonderkid Zalan Vancsa from MTK Budapest. The Telegraph reports that the 17-year-old winger will stay in Hungary until the end of the season before joining up with his new City teammates in the summer. Vancsa is set to undergo a medical this week. Bayern Munich, AC Milan and Sevilla were all said to be monitoring the rising star, but City have acted quickly to beat the opposition to his signature.

– Victor Osimhen is a wanted man, and though he appears happy to stay at Napoli until the summer, he’s been identified by Arsenal and Newcastle as a top target, according to Gazzetta dello Sport. Arsenal’s interest appears to rest on whether or not they can unload the aforementioned Aubameyang, who’s future is clearly destined to be away from north London. Barcelona are interested in the Gabon striker, and if that deal happens the Gunners could move in for Osimhen. The 23-year-old boasts a goal roughly every two games for the Italian side and his record at previous side Lille was equally as impressive.