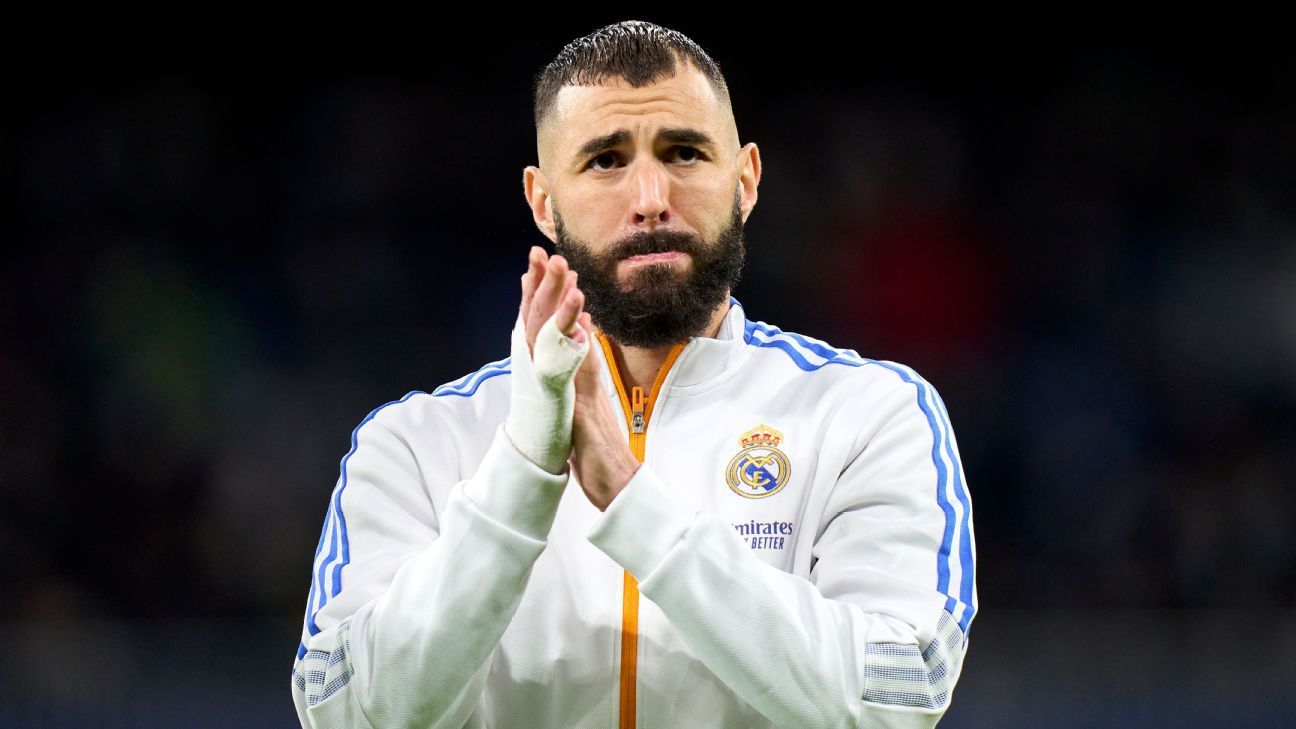 Karim Benzema has been playing Paris Saint-Germain for nearly 16 years now. At first, it was easy.

The suede-headed, Ronaldo Nazario-adoring kid with eight brothers and sisters from a tough Lyon suburb first set his remorseless, hungry eyes on the red and blue of the capital club, which is only 16 years older than he is, in 2006 at the age of 19. On the eve of the 2006-07 season, in the Trophee des Champions, Benzema scored an equalising goal in a contest that finished 1-1 after 120 minutes and OL won on penalties.

From that day onwards Benzema, for Lyon and now Real Madrid, has lost just once in eight tussles with les Parisiens, despite scoring just one more goal since that summer of 2006, beating them in the league, the Coupe de France final and, ultimately, in the Champions League — a competition he’s won four times but PSG have yet to conquer. To Benzema, it’s “as important as winning the World Cup but more difficult to win,” to PSG it’s become their raison d’être, the holy grail that eludes them, taunts them and, right now, whose failure to win defines them.

Right now, on the edge of another chance for the Algeria-descended all-time great of French football to thumb his nose at the nouveau riche from his nation’s capital, things aren’t so easy. PSG have stopped feeling like his personal soft touches.

Up 2-0, both courtesy of Real Madrid’s No. 9, the man with 76 Champions League goals, PSG took revenge in November 2019, the last time these clubs met, with a pair of late goals that ensured Thomas Tuchel’s team, not Madrid, won Group A.

Earlier in that season, which PSG ended as beaten finalists, had come Benzema’s and Madrid’s last competitive trip to the Parc des Princes. They were walloped. If you watched that match, and it’s Madrid who own your heart, you’ll still be having nightmares.

PSG shredded Zinedine Zidane’s side, over and again, faster, more competitive, fitter, more aggressive and the eventual 3-0 winning margin could have been double that. A night of mist, damp, embarrassment and pain.

Now Benzema, and los Blancos, are back; back for revenge, back to try to move forwards in the competition they treasure the most. But he’s not in shape. Whether this man — who requires 21 more goals to become the second all-time scorer for the most successful, grandest club in the history of football — makes the starting lineup is a matter for both speculation and nerves.

What appeared to be a manageable hamstring problem, incurred in the costly 2-2 draw with Elche, first took slightly longer to heal than expected and then, partly thanks to manager Carlo Ancelotti’s desire to have him back, suffered a setback. On Feb. 5, Madrid’s Italian boss announced that his talismanic French strike leader wouldn’t play against Granada, but commented: “He’s been training for a few days, he’s not in shape yet, we’ll have to wait two or three more days … but he’ll be back for the next match.”

The next match was at Villarreal, which is to say Saturday’s 0-0 draw in which not only did Benzema not make the squad, los Blancos dropped two points so that their LaLiga lead over Sevilla was cut.

In the days between the Granada and Villarreal tests, Ancelotti authorised Benzema to undertake sprint training on one of the specially designed uphill inclines at their Valdebebas training ground, and Benzema’s hamstring protested. That explains his inability to face the Yellow Submarine, and it explains the nerves over not only whether he’ll start in Paris but concerning what level of performance he can produce — either as part of the XI or as a substitute.

His importance to Madrid’s chances of eliminating the French champions is almost indescribably huge. In individual terms, he’s contributed 24 goals and 9 assists in 28 matches this season. Those are Herculean figures, especially achieved at the age of 34.

Better still, his partnership with Vinicius Junior is devastatingly attractive and dangerous. Between them, they’ve created or scored 58 of los Blancos goals this season. Stripped of Benzema, Vinicius is still potent, still potentially a tie winner, but he can occasionally look a little indecisive, short of a soulmate.

Without this divisive but divine striker, Madrid have struggled to edge past lowly, uninspired Granada (1-0), dropped points without scoring at Villarreal and been knocked out of the Copa del Rey (without scoring) by Athletic Club. Frankly, if Benzema doesn’t have a big role in the two games against PSG, then the chances of Madrid continuing in the competition they regard as their personal fiefdom are frighteningly diminished.

“He’s a great footballer, one of the best in the world,” PSG manager Mauricio Pochettino said. “Most of all he’s a very important player for his team. If he doesn’t make it, it’ll be a loss for Madrid. I’m not going to say it’ll be a huge plus for us because they have other great players, but it would change things for Madrid.”

Not only is the Argentinian tactician quite right, despite the veritable forest of his own problems to cope with, he’s also part of the equation which Ancelotti has to solve. You see, there’s a lot more than simply progressing to the next round riding on this tie.

In Spring 2018, Pochettino renewed his contract at Tottenham Hotspur for a further five years. For whatever (misjudged) reason, he ignored the option of insisting on a buyout clause. As happy as he plainly was in north London, feted, surrounded by interesting players, about to move into a cutting-edge new stadium and a year away from reaching the Champions League final in Madrid, it was a mistake.

That summer he bumped into two of Madrid’s board, effectively the only two who really count, at a society wedding reception in the Spanish capital. Zinedine Zidane had just shocked Florentino Perez to his core by quitting only a handful of days after Madrid’s stunning 3-1 win over Liverpool in the Champions League final.

Pochettino was asked directly by the Madrid suits whether it really was true that he’d not inserted a “get out” clause in his new Spurs deal. True, he affirmed. Well, that’s a pity, he was told. Otherwise you’d be the Madrid manager by now.

The Argentine, at that stage, was the No. 1 candidate by a distance for the club that was still reeling at losing their winning, charismatic and iconic manager in such circumstances. Not only were Madrid unsure about what to do next, their decision to recruit Julen Lopetegui was roundly condemned — controversially costing the Basque his job with Spain immediately before La Roja‘s World Cup campaign in Russia commenced — and it was an experiment Florentino Perez was willing to tolerate for exactly four months.

OK, case established as to what Madrid then thought of the guy who’s in the opposition dugout this week. Since then, the 49-year-old hasn’t only taken Spurs to the verge of Champions League glory, he’s finally won his first two trophies as a coach, ridding him of that “not a winner” stigma.

Now, none of this would be of the slightest concern for Ancelotti were things not a little more precarious for him right now at the world’s most political, most draconian club than they look. The last time the Italian, who was “surprised” to get the call to take over again last summer, was “boss” at Madrid, he quickly found out that he wasn’t the boss of bosses.

Four trophies in his first season, 2013-14, including an ultra-emblematic Champions League final win over Atletico Madrid in Lisbon, but sacked after the second season because of a perceived “lack of modernity” and a collapse when victory in LaLiga had looked assured. He was angry back then, scarred, jolted, in plain disagreement with Perez’s logic and, that means, fully aware of where he stands right now.

Elimination at San Mames earlier this month, kissing adios to La Copa wasn’t great, but neither was it enough to cost him his job. Playing “catch us if you can” with Sevilla, who haven’t won the title since the end of World War II, isn’t greatly encouraged by the hardline, “win or your sacked” Perez, but it’ll be pardoned if Madrid ultimately answer their trophyless 2020-21 season by becoming Spain’s champions in 2021-22.

If Benzema’s injury and the evident weariness of the vital Madrid midfield trio of Luka Modric, Casemiro and Toni Kroos were to mean that Pochettino’s PSG brushed them aside and dumped los Blancos out of Europe in early March, there would be grave consequences. Any stumbles, let alone a full-blown collapse, against Sevilla’s domestic pursuit in those circumstances would mean the end for Ancelotti, sadly — with his rival this week the obvious candidate to replace him.

There are some hypotheticals there and, frankly, if Madrid can get the most out of their personnel over 180 minutes of this tie, then they certainly have the edge as a team. PSG’s front three of Lionel Messi, Kylian Mbappe and Neymar — the latter, who’s been out since November with an ankle injury, could return on Tuesday — hasn’t truly fired yet. However, if they do, then this is a giant of a knockout tie; one for the ages, one that could well dictate how long Ancelotti’s second Bernabeu reign lasts, and one that will very probably be dictated by how shrewdly the Italian uses his wonderful, deeply loyal, hugely ambitious but currently not fully fit French striker.

Over to you, Carlo. This is why you get the big bucks. Best of luck in getting the big decision right.