Manchester City may have sauntered into the FA Cup quarterfinals with a routine 3-1 win over Swansea City on Wednesday, but it was a result that made history (stream the replay on ESPN+ in the U.S.).

Goals from Kyle Walker, Raheem Sterling and Gabriel Jesus were enough to secure the result at the Liberty Stadium, despite 20-year-old debutant Morgan Whittaker pulling one back for the Swans late on.

Jump to: All the records broken by Guardiola’s Man City

Not only did Pep Guardiola’s side make it through to the last eight without breaking much of a sweat, they also entered the record books by racking up their 15th successive win in all domestic competitions.

The previous record was co-held by Preston North End, who won 14 consecutive games during the 1891-92 season, and the Arsenal team of 1987-88, who matched the feat almost a century later. During their record-breaking streak, City have scored 40 goals and conceded just five at the other end.

It’s worth noting that Guardiola’s all-conquering City team actually “won” 20 consecutive matches in all competitions between August and December 2017, However, the 12th game in the run was a penalty shootout win over Wolves in the Carabao Cup, and shootout victories are officially recorded as draws by most record-keepers.

The win was also a personal landmark for Guardiola, as with it he surpassed the win percentage he achieved during his glorious spell in charge of Barcelona, when he won 14 major trophies including two Champions Leagues and three La Liga titles. Guardiola’s stint at Bayern Munich remains the spell with the best win percentage, although his three-year spell in Germany took in significantly fewer matches than his time at Barca and City.

Of course, this is just the latest in a long line of statistical milestones reached and records broken by Guardiola and his Man City charges. Here’s a look back at the other records he’s smashed since taking up the reins at the Etihad in 2016. 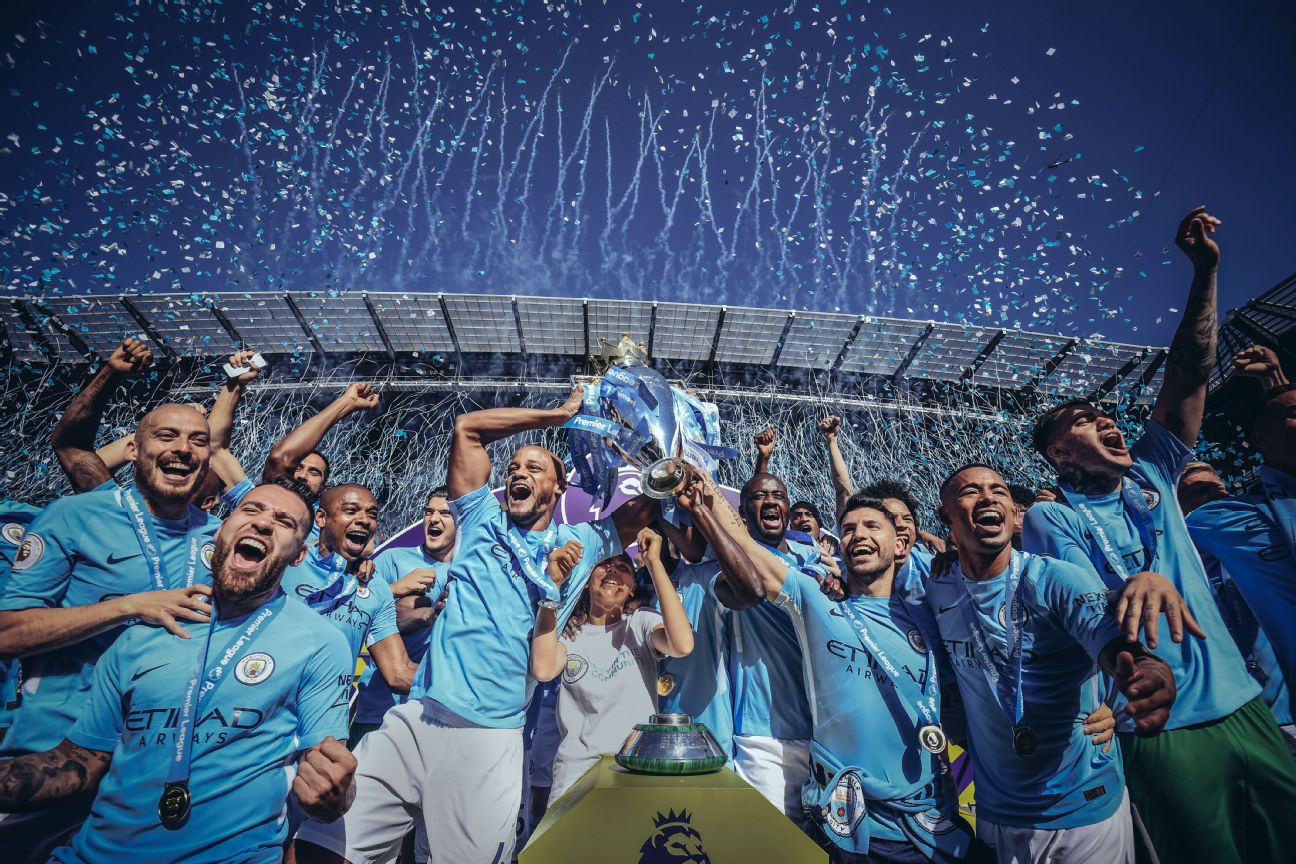 City were incredibly dominant in 2017-18, winning the league title with a 19-point gulf between themselves and Jose Mourinho’s Manchester United, who finished in second place. Just to make it all the sweeter, the previous record had also belonged to United, who won the 1999-2000 title by 18 points. City can also boast the narrowest title-winning margin too, after they pinched the 2011-12 championship from under United’s noses on goal difference thanks to Sergio Aguero’s last-gasp winner against Queens Park Rangers on the final day of the season.

Most Premier League points in a season

Another record set on the final day of the 2017-18 season, when City narrowly beat Southampton 1-0 (thanks to a late, late goal from Jesus) to finish with a win and thus reach the landmark total of 100 points. Liverpool looked on course to break City’s record in 2019-20, but eventually fell short of The Centurions as they finished their title-winning campaign with 99 points.

Most Premier League wins in a season

City powered to 32 victories during the 2017-18 Premier League season to break a record that had only been set the season before, when Antonio Conte’s Chelsea won 30 of their games en route to lifting the title.

Most Premier League goals in a season

With Aguero and Sterling in red hot form, City scored 106 goals in 2017-18. With Pep’s side averaging 2.7 goals a game, it’s a tally that remains unmatched. 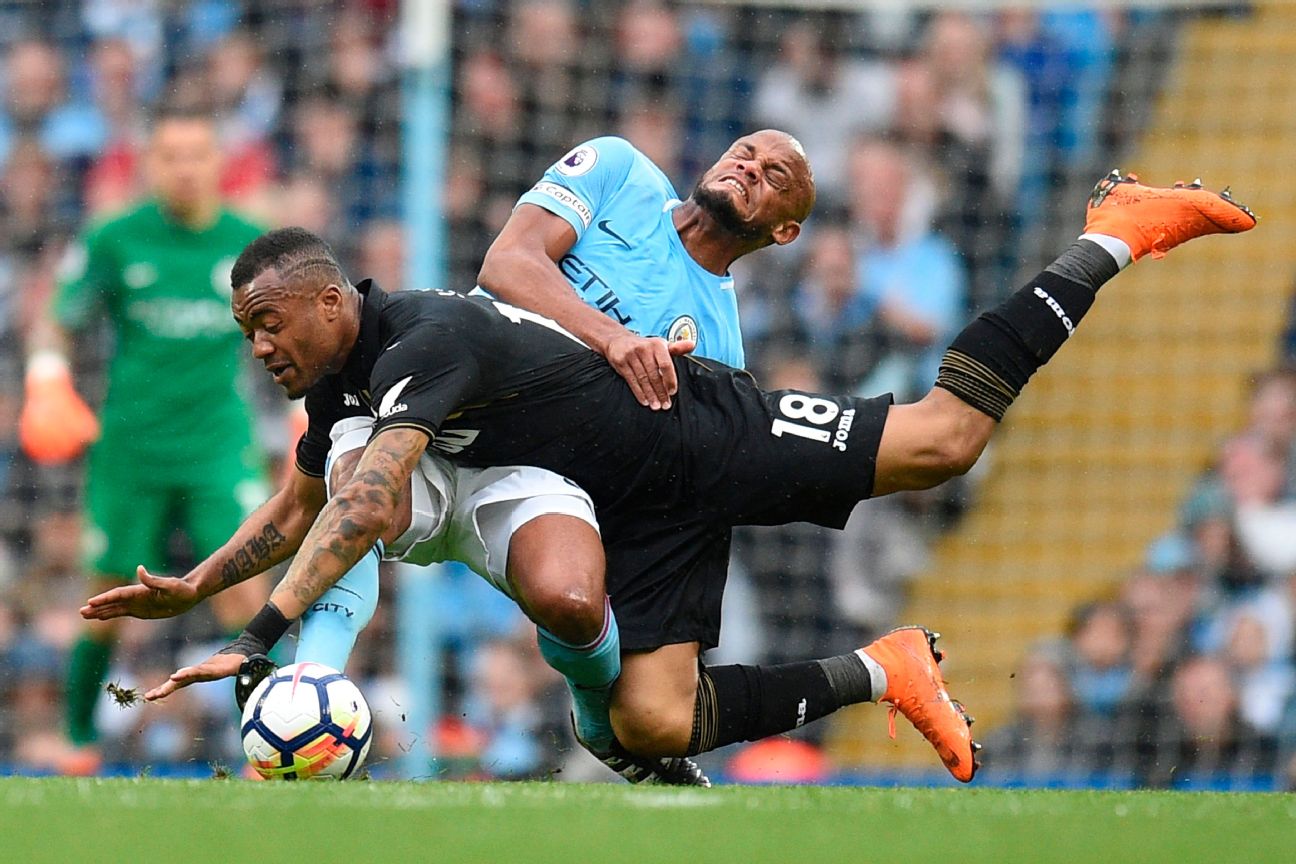 Given the sheer amount of goals scored, it shouldn’t come as much of a surprise to find that City ended the 2017-18 season with a record high goal difference too. Their defending was as adept their attacking, as Guardiola’s men conceded just 27 goals in 38 matches, leaving them with an unparalleled goal difference of +79.

Most Premier League wins in a row

A record co-held with Liverpool, City won 18 league matches in a row between August and December 2017, during which time they scored 58 goals and conceded just 11. It all came to an end on New Year’s Eve, with a fairly drab goalless draw against Crystal Palace at Selhurst Park.

Most Premier League away wins in a row

A record amassed across two seasons, beginning with a 5-0 trouncing of Watford on the final day of the 2016-17 season and ending with a 1-0 win over Newcastle the following December. During that time, City won 11 successive away league games — a record they share with Chelsea, who did likewise in 2008. The Newcastle game was settled by a single Sterling goal that saw City go 15 points clear at the top of the league.

Most Premier League away wins in a season

The aforementioned Jesus goal against Southampton on the final day of the 2017-18 season saw City secure their 16th away win of the campaign. This broke a record previously belonging to Chelsea, who won 15 games on the road in the 2004-05 season.

Most Premier League Manager of the Month awards in a row

Guardiola is the only manager in Premier League history to have been named Manager of the Month for four successive months. The City boss broke new ground when he took the plaudits each month between September and December of 2020. The record had formerly stood at three awards in a row, set by Antonio Conte of Chelsea when he won in October, November and December of the previous season.