The global football players’ union and the group representing domestic leagues around the world have teamed up to strengthen their voice in negotiations involving off-field politics such as the international match calendar.

The FIFPRO union and World Leagues Forum signed a new labor agreement at the United Nations’ International Labor Organization on Monday that they said will “stabilize the professional football environment by strengthening employer and employee representatives on a worldwide level and promoting fair conditions of employment in football.”

The ILO said it was “the first global agreement on working conditions and rights of professional football players.”

The move comes after years of tournament expansions and failed proposals for new competitions left many soccer officials feeling sidelined and active players saying their opinions were ignored.

Some of the failed proposals that have divided the footballing world include the proposed European Super League, biennial World Cups, a $25 billion overhaul of FIFA competitions, adding more teams and co-hosts to the 2022 World Cup in Qatar, and a Champions League reform plan in 2019 that would have locked in some wealthy clubs to guaranteed entries.

FIFPRO and the domestic leagues have seats on FIFA’s stakeholder committee and UEFA’s strategy council, but the status of those panels has declined.

The aim of the new partnership is to “actively pursue equitable representation in international decision-making,” the 66-nation FIFPRO union said in a statement.

The ILO said it could be called upon to provide expert advice on how to implement the agreement.

Under the banner of a “Global Labor Agreement,” an executive panel is expected to meet within weeks to discuss issues including the FIFA-managed calendar for national-team games.

The FIFA calendar mandates when clubs must release players to their national teams in an increasingly congested program of domestic and international competitions.

The current calendar expires in 2024, but the debate on its renewal became tangled up last year in FIFA president Gianni Infantino’s push to double the number of World Cups. French coaching great Arsene Wenger also worked on FIFA’s plan to restructure the game for the 211 national members and favour more tournaments over qualifying games.

Other issues for the new labor panel to address in the men’s and women’s game include employment standards, managing concussion and head injuries, tackling discrimination, racism and abuse on and off the field, and other forms of abuse, the Geneva-based ILO said.

“We are committed to supporting the ambitions of both organizations to implement fair working conditions and to promote social dialogue in professional football,” said Jerome Perlemuter, general secretary of the Zurich-based World Leagues Forum, which has 44 members including the top European leagues and Major League Soccer. 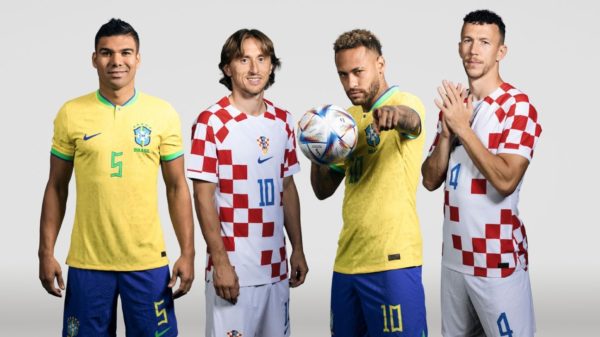 DOHA, Qatar — It is a meeting of titans and, really, the clash of the World Cup quarterfinals, a game where flickers of grace...