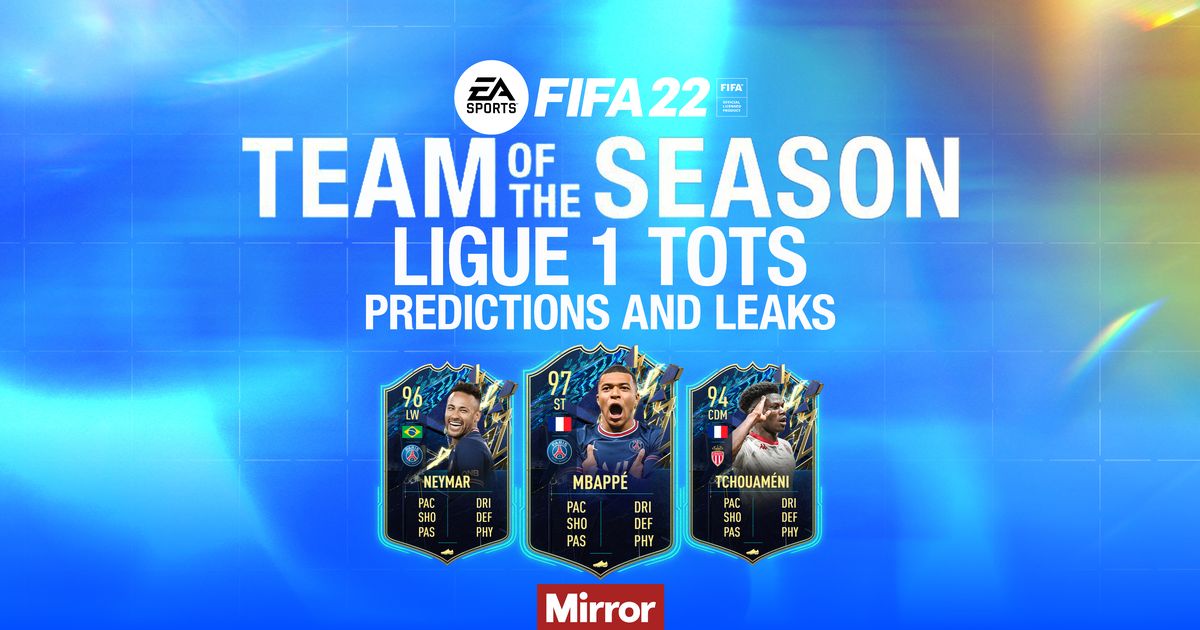 Latest FIFA 22 news from the Mirror as the EA Sports Ligue 1 TOTS (Team of the Season) is set to be released into packs very soon, with the best France-based players set to feature.

Players will soon see the FIFA 22 Ligue 1 TOTS released into FIFA Ultimate Team, with players from Paris Saint-Germain expected to dominate the XI.

The FIFA 22 TOTS event is one of the most anticipated releases in the FUT calendar with seven TOTS squads already having been released into Ultimate Team already, including the Premier League, La Liga and Bundesliga. The FUT Team of the Season Promo rewards the best performing players from the domestic campaign with heavily boosted TOTS player items in FUT 22, and after an interesting Ligue 1 campaign, we could see one of the most varied Ligue 1 TOTS in a long time.

After PSG were crowned Ligue 1 champions weeks before the end of the season, a number of players from Mauricio Pochettino’s squad are likely to feature in the FIFA 22 Ligue 1 TOTS lineup. With Ligue 1 having both a tight battle for the European football qualification spots and a fight for survival at the bottom of the table, the 2021/22 season has been one of the most fascinating campaigns across Europe.

PSG finished the season 15 points clear of second place, with the joint-best defensive record in the division with just 36 goals conceded in 38 games. The Ligue 1 TOTS defence features Gianluigi Donnarumma and Marquinhos from PSG after an incredible defensive performance in their title-winning season, alongside Ligue 1 young player of the season William Saliba and RC Lens’ impressive wing-back Jonathan Clauss.

In midfield, Aurelien Tchouameni and Seko Fofana have both been incredible for their respective clubs throughout the 2021/22 season, whilst Benjamin Bourigeaud has had a sensational season for Stade Rennes in multiple positions, mainly being played wide on the right scoring 11 goals and registering 13 assists. Dimitri Payet continues to shine in the French top-flight despite being 35-years-old, scoring 12 goals and registering 10 assists for Marseille as the playmaker helped his side qualify for the Champions League and finish second in the league.

In attack, Lionel Messi makes the Ligue 1 TOTS in his debut season for Paris Saint-Germain, playing the role of provider over a goal scorer, registering 14 assists in 26 appearances in Ligue 1. Kylian Mbappe has been the star of the season, not just in Ligue 1 but in Europe and is considered by many as the best player in the world right now, scoring 28 goals and registering 19 assists in 35 appearances. The World Cup winner recently signed a new deal to stay at the Parc de Princes and will continue to terrorise opposition defences in Ligue 1 for the next three years.

Wissam Ben Yedder of Monaco had an exceptional season, scoring 25 goals in 37 games, joining Messi and Mbappe in the Ligue 1 TOTS attack ahead of the likes of Neymar, Moussa Dembele, Martin Terrier and Anthony Delort. Other players that could have featured in the Ligue 1 TOTS squad include Randal Kolo Muani of Nantes, Jonas Omlin, Teji Savanier of Montpellier and Tiago Djalo of Lille.

If you don’t want to see any spoilers for the upcoming FUT 22 Ligue 1 TOTS, look away now. According to various social media accounts, including @FutSheriff, the following players could be set to feature in the FIFA 22 Ligue 1 TOTS (Team of the Season) squad.

These players have yet to be confirmed officially by EA Sports ahead of the official reveal.

Along with the main squad release, a selection of themed Squad Building Challenges and objectives will be released, with more players available to earn.

What do you think of Mirror Football’s FIFA 22 Ligue 1 TOTS predictions? Let us know in the comments below!