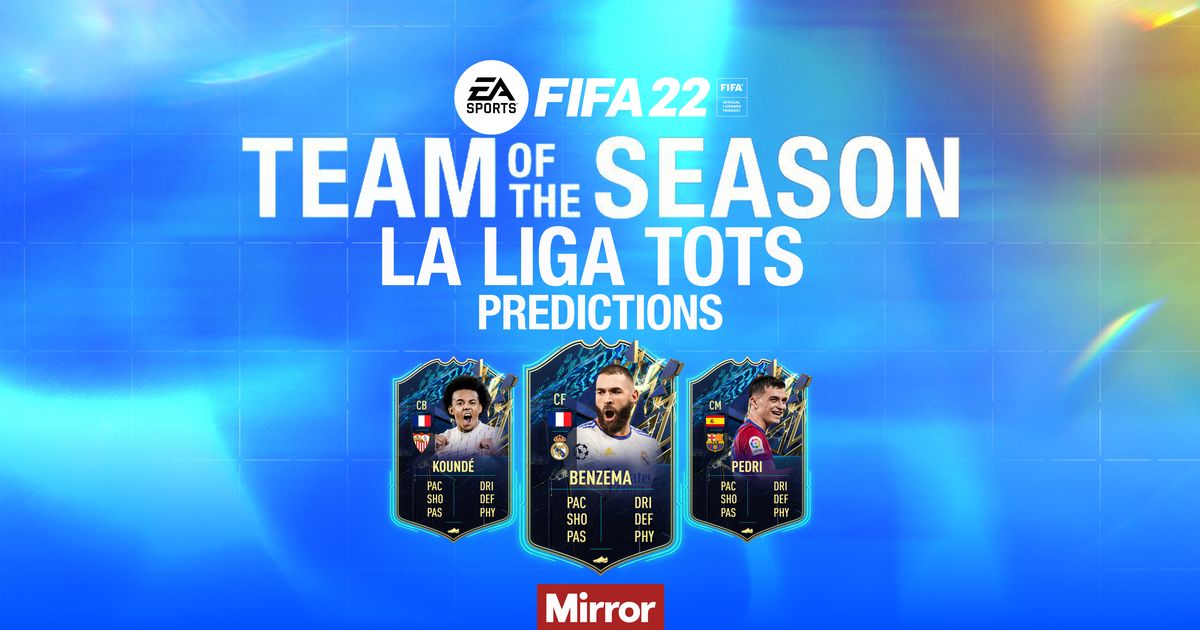 Latest FIFA 22 news from the Mirror as the EA Sports La Liga TOTS (Team of the Season) is set to be released into packs very soon, with the best players from Spain set to feature.

The FIFA 22 TOTS event is one of the most anticipated releases in the FUT calendar with six TOTS squads already having been released into Ultimate Team already, including the Premier League, EFL and Bundesliga. The FUT Team of the Season Promo rewards the best performing players from the domestic campaign with heavily boosted TOTS player items in FUT 22, and after an interesting La Liga campaign so far, we could see one of the most varied La Liga TOTS in a long time.

After Real Madrid were crowned La Liga champions weeks before the end of the season, a number of players from Carlo Ancelotti’s squad are likely to feature in the FIFA 22 La Liga TOTS lineup. With La Liga having both a tight battle for the European football qualification spots and fight for survival at the bottom of the table, the 2021/22 season has been one of the most entertaining campaigns across Europe.

So, which players could make the FIFA 22 La Liga TOTS squad? What sort of content is expected, and when is it going to be released? Here are Mirror Football’s FIFA 22 La Liga predictions.

Six Real Madrid stars feature after Ancelotti’s side dominated La Liga and cruised to a historic 35th title. Defensively, it is difficult to split Madrid and Sevilla with the champions conceding just 31 goals so far this season whilst the latter has the best defensive record in the division with just 30 goals conceded.

There’s a mix of Madrid and Sevilla stars in defence with Thibaut Courtois in goal with the Belgian keeping 15 clean sheets in 35 appearances this season and being an instrumental player as Los Blancos won the title. Eder Militao was another standout player in Madrid’s squad with the Brazilian having an exceptional season at the Santiago Bernabeu.

Sevilla pairing Jules Kounde and Marcos Acuna have been brilliant for Julen Lopetegui this season and have contributed significantly to the team defensively. Ronald Araujo of Barcelona has impressed throughout the season, becoming a mainstay in the Barca defence and features in my La Liga TOTS.

In midfield, we’ve gone for Luka Modric, Casemiro and Pedri. All three players have had brilliant seasons, with Modric and Casemiro ageing like fine wines. Barcelona youngster Pedri has had a breakthrough season and despite suffering injuries, the midfielder has been exceptional.

In attack, Vinicius Junior and Karim Benzema have to feature in the La Liga TOTS with both players having immense campaigns for Real Madrid both domestically and in Europe. It was a toss-up between a few players for the final spot, Iago Aspas is a strong choice, who despite being 34-years-old, continues to excel. The forward averaged a goal every two games for Celta Vigo this season scoring 18 in his 36 appearances.

Along with the main squad release, a selection of themed Squad Building Challenges and objectives will be released, with more players available to earn.

What do you think of Mirror Football’s FIFA 22 La Liga TOTS predictions? Let us know in the comments below!