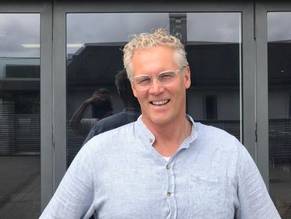 Born in Esbjerg, Denmark, in 1971, Peder Schau Kristensen trained as a blacksmith. For the past 25-plus years, he and his wife Tina have owned the Henne Strand Camping & Resort. Together with Feriepartner Henne Strand, they also rent out more than 60 vacation homes on the Danish south coast of the North Sea.

When and how did you become a Borussia Dortmund fan?
As with so many of my fellow countrymen, it all started with Flemming Povlsen. Watching him during those illustrious years sporting the Borussia Dortmund jersey in the 1990s made us incredibly proud. And who can forget his departure from Borussia Dortmund after winning the Bundesliga championship with the club in 1995? When forced to end his career due to injury, the fans gave him such an emotional sendoff. He couldn’t hold back his tears. Neither could we.

Have you ever been to the stadium?
Sadly, no. But I’m currently planning a trip together with my team. Many of them including, for instance, our chef Ole Olesen, have caught the Borussia Dortmund bug – thanks in no small part to our “token German” Tim Uhlemann. We plan to go to a Champions League game in the fall. We’ll have to wait and see who Borussia Dortmund is up against then …

How do you keep up with Borussia Dortmund games at home in Denmark?
I often don’t have the time to watch on Saturday afternoons because that’s when it’s all hands on deck at our vacation resort. So I stream the Borussia Dortmund games in the background. There have been times in the reception area when I’ve gotten funny looks for suddenly bursting out with a celebratory cheer when the team scores.

April 9, 2013 is forever burned into my memory. Together with my Danish buddies Finn, Peder and Mikael, I watched the Champions League quarterfinal game against Málaga. Even with beer to keep us in good spirits, the mood turned very somber when the visitors took a late 2-1 lead. But when Santana tapped the ball over the line to take our side 3-2 up, we were exultant. I was a bit concerned about the safety of my living room furniture.

Who are your favorite Borussia Dortmund players?
Back in the day, it was Flemming Povlsen, of course. Today, I’d say Marco Reus, because he is a true Dortmund native. Thomas Delaney is also great, so it’s a real pity that he no longer plays for Borussia. I remember a TV report showing a little boy in a Borussia Dortmund jersey who was crying because he had heard that Thomas Delaney had been sold to Sevilla FC.

They say the happiest people in the world live in Denmark. Is that true?
Well, I can tell you that I’m happy and so are my wife and kids. Denmark enjoys an outstanding social welfare system that unfailingly supports residents from cradle to grave. We admittedly pay high taxes, but benefit from that money through our education, health and welfare systems. What’s more, we Danes always pull together to solve problems – just like Borussia Dortmund.
Interview: Uwe Schedlbauer

In this section, our main sponsor Evonik, who supports us at all of our international games, lets soccer fans who feel close to Borussia Dortmund but live nowhere near SIGNAL IDUNA PARK have their say.

Borussia Dortmund and Denmark. Thomas Delaney comes to mind and, above all, Flemming Povlsen, who scored 20 goals for Borussia Dortmund between 1990 and 1995. While that’s not the highest tally, his speed, commitment and cunning made him a fan favorite. A second tear to his cruciate ligament may have ended his career but his tearful farewell on the day Borussia Dortmund won the Bundesliga title in 1995 lives on in memory. The highlight of his career was winning the 1992 UEFA Euro Championship in the final against Germany.

Evonik has an office in Vejle in neighboring Denmark. And it’s not just the cozy aspects of the home of hygge that attracted Evonik, but also its wilder side. After all, the latest offshore wind turbines are being tested on land in Østerild, on the northwest coast. And it’s Evonik who makes it possible to build wind turbines that reach heights of up to 245 meters in the first place. As technology leaders in this field, Denmark is consequently an important country for the Group.