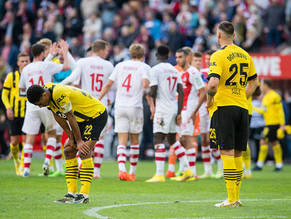 The first-half shot count finished at 12-4 to Borussia Dortmund, while Cologne had more attempts in the second period (16-9). Overall, there were 41 shots throughout this entertaining encounter (21-20 to Dortmund). The match facts.

Chances galore: Cologne versus Dortmund was the first game of this Bundesliga season in which both teams registered at least 20 shots.

Chances not taken: BVB came away empty-handed in the end – but could have won based on the quality of their opportunities (xG: 3.2-2.0).

Important Brandt goals: Ten of Julian Brandt’s last 11 Bundesliga goals either put BVB ahead or drew them level. He has opened the scoring twice this season.

Lively: Though he didn’t play the full 90 minutes, Donyell Malen recorded the most shots (six).

Landmark: Salih Özcan made his 100th Bundesliga appearance (95 for Cologne, five for BVB).

Creative: All 11 of Dortmund’s Bundesliga goals this season have come from open play.