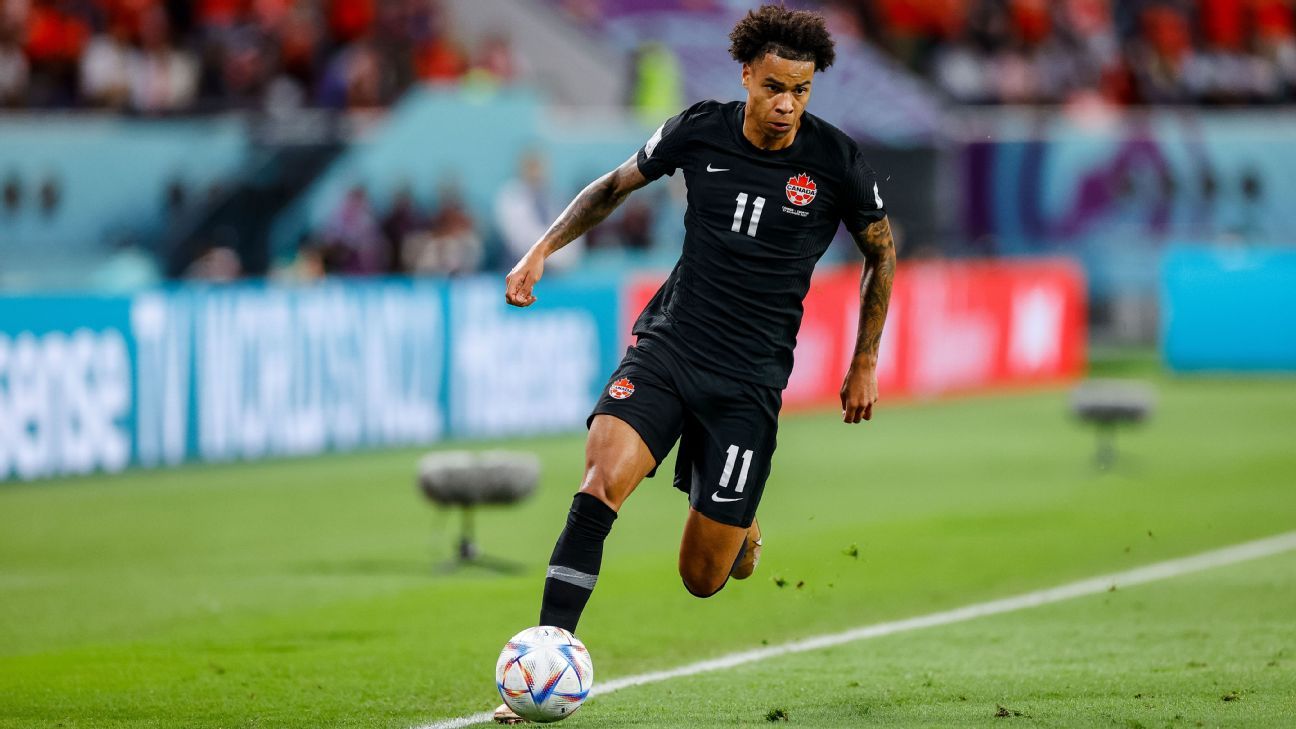 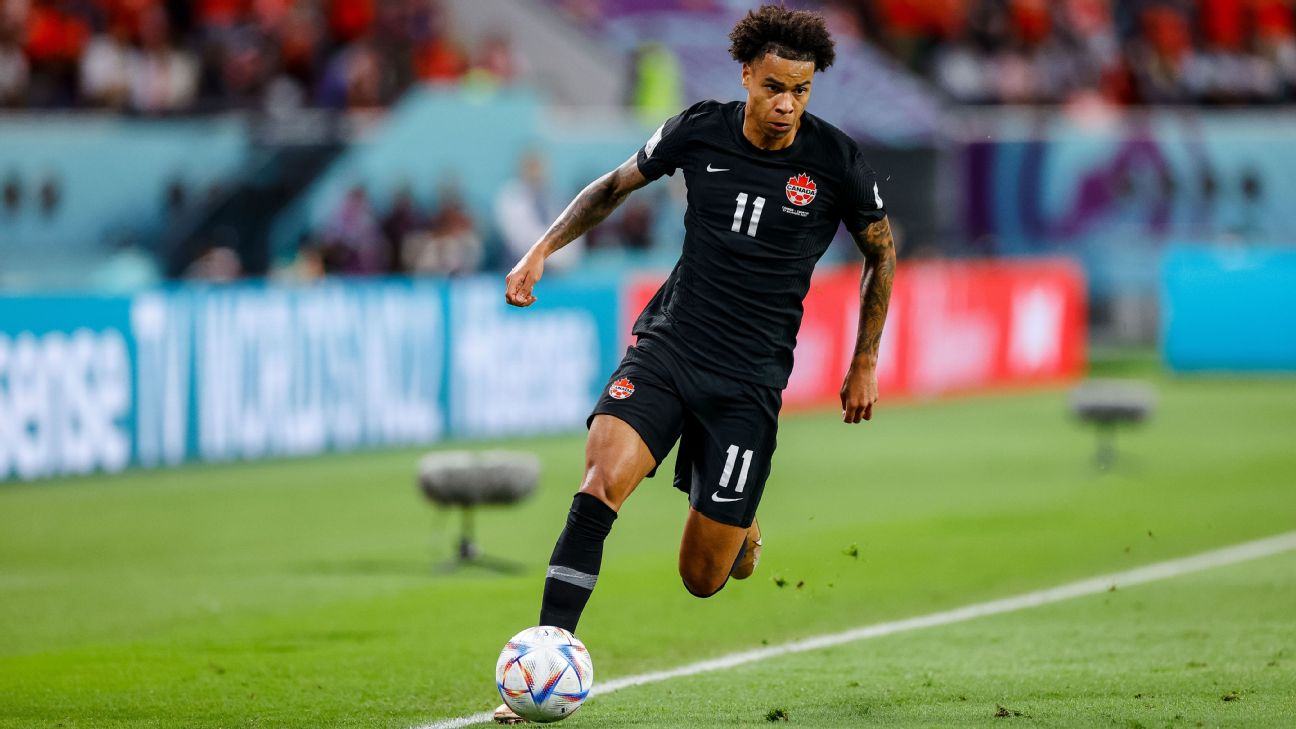 AL RAYYAN, Qatar – It was a sequence Tajon Buchanan has practiced thousands of times. He collected the ball on the right wing, looked toward goal and surveyed his options.

But this wasn’t a training session in Ontario, Canada. This wasn’t a high school soccer match in Colorado or an ACC fixture in upstate New York. This was the World Cup. So, as three teammates barreled toward the Croatian goal, it would have been understandable if global sports’ biggest stage led to a nervy moment.

Then again, that’s not how Buchanan is wired.

He set his feet and picked out Bayern Munich star Alphonso Davies making a late-arriving run and delivered an inch-perfect cross for an oncoming header. Goal. Pandemonium. History. Just 66 seconds into the match against the tournament’s defending runners-up, Buchanan and Davies teamed up to deliver the first World Cup goal in Canadian history.

“When we first took over this program, we talked about that moment,” Canada coach John Herdman said. “That moment unites people, unites families. It ignites passion.”

After mostly outplaying Belgium in a tough-to-take 1-0 loss a few days prior, it was a sublime display of skill from two players in their early 20s that forced the world to ask: Is Canada for real?

Not quite, as it turned out. Croatia methodically turned things around to win 4-1, mathematically eliminating Canada just two games into its first World Cup appearance since 1986. However, ahead of its final match against Morocco on Thursday there is no denying the impression that was made. Canada, perhaps naively, tried to impose itself on two international powers and, in the process, showcased exciting attacking flare that bodes well for the team’s potential in 2026, when Canada will co-host the tournament with the United States and Mexico.

In many ways, Buchanan embodies the meteoric rise of Canadian soccer. A mostly anonymous prospect until the last two years, Buchanan earned a move in 2021 from Major League Soccer to Belgian power Club Brugge — which has reached the Champions League Round of 16 — and, after two standout performances in Qatar, seems poised to take his career to even higher levels.

In 2016, the idea that Buchanan had the potential to develop into a global star would have seemed silly. He had moved to Colorado with a close friend and his father a year earlier to pursue soccer at a higher level but had been initially ruled ineligible to play for the Colorado Rush in the United States Soccer Development Academy.

He could still train with the club, but his absence from high-profile competitions limited broad exposure. A workout at a Syracuse University identification camp led to an opportunity to play for the Orangemen and to stay sharp, he elected to play high school soccer his senior year. At a time when his future World Cup opponent and Ballon d’Or winner Luka Modric was winning Champions League titles next to Cristiano Ronaldo with Real Madrid, Buchanan was torching suburban kids all around the Denver area.

When it came to name the state Player of the Year, his coach at Legacy High, Tony Romano, stood up in front of the other coaches and listed the names of the best players that come through the state.

For Romano, however, it wasn’t Buchanan’s record-setting goal tally or next-level athleticism that is most seared in his mind. It was Buchanan’s unique perspective and understanding of the moment. In a state playoff match, Legacy earned a penalty and with Buchanan one goal shy of the single-season school goal record, he was the obvious choice to take the shot.

“We had a sophomore on the team, and he tells this kid, ‘Hey, why don’t you take the penalty kick,’” Romano said. “Which is just a testament to a couple things. One, his character. And two, his confidence knowing that, that ‘this is not the end for me.’ He knew that he was bound for bigger things on a much bigger stage, but to that sophomore, that might have been the biggest moment in his playing career.”

When he got to Syracuse, Buchanan immediately slotted into the starting lineup for a team that featured Kamal Miller, who also started Canada’s first two group-stage matches. “His first year, he was good,” Syracuse coach Ian McIntyre said. “Second year, he was terrific, and third year would’ve been awesome, but that’s when we lost him to Major League Soccer.”

For McIntyre, seeing both his former players progress through the college system to starting roles with the World Cup has been surreal.

“To see those guys go from preseason games here on campus to going against Kevin de Bruyne? Yeah, that’s very special,” he said. “It’s a long way from playing Cornell midweek. But I think that the path is different for each player.”

In 33 games over his two years at Syracuse, Buchanan scored 12 goals with six assists. The potential was there, but, still, the consensus about what he could be drastically underestimated what he has become. New England drafted him No. 9 overall — bypassing him with its first pick in the process — and he didn’t immediately slot in as an every-game starter.

When Bruce Arena and his staff replaced Brad Friedel in May 2019, it was Buchanan’s defensive ability that made the first impression in practice, but it didn’t lead to much playing time. Assistant coach Dave Van den Bergh said it took some time for the staff, and him in particular, to learn how to coach Buchanan. What Buchanan needed, Van den Bergh learned, was that he responded well once the coaches expressed trust in him and that they cared for him.

During the Covid shutdown in 2020, Arena instructed his assistant to write individual player evaluations and present them to the guys they worked most closely with. Buchanan was under Van den Bergh’s purview.

“I gave him a call and I was like, ‘Listen, I feel like I’ve [messed] up with you,’” Van den Bergh recalled to ESPN. “I didn’t know how you would tick and there was just not enough to figure that out [in 2019]. I see you now. I see what you’re capable of. And now I’m going to help you in any way, shape or form that I can. And from you I need 100 percent commitment. And he was like, ‘You got it.’”

It could have seemed like any normal coach-player interaction, but Van den Bergh said from that point forward — when it seemed like genuine trust had been established — he noticed a difference. The ascent quickly followed. New England fielded some low-ball offers from European teams following the 2020 season before his breakout season in 2021, when he helped guide the Revolution to the MLS single-season points records.

As Buchanan’s development path traversed through levels mostly bypassed completely by those who advance to the top of the sport, he remained uninvolved with Canada’s national team program. He was notably left off the U-20 roster for the 2018 CONCACAF championships, before getting called in for the U-23 Olympic qualifying tournament in 2021.

Herdman gave Buchanan his first full-team cap in early 2021 and he has since become an integral part of the team, featuring 28 times — including 17 times in all stages of World Cup qualifying – with four goals and six assists.

It was that initial period when he broke out for Canada and New England in 2021 that generated significant interest from abroad led to his move to Club Brugge. The deal was for a reported $7 million with incentives that could earn New England another $3 million and includes a 10% sell-on fee. Buchanan has been slowed by injuries, at times, since the movie, but when healthy he’s a key player — evident by his four Champions League starts.

“What you see on the world stage now is for me is a young 20-odd-year-old is a complete player. He’s a for-moment player,” Herdman said. “He’s as committed to his defending responsibilities as he is to his attacking. But I think in both games, he had one of those ‘Oh-wow’ moments where only the top, top players show those moments at World Cups.

“I think he showed them whether it’s little touches down by the corner or blowing by a player. It’s been a terrific two games and there’s more to come.”