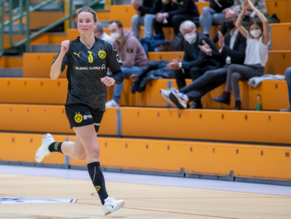 On Sunday morning, the Borussia Dortmund women’s handball team returned home from their Champions League match in Brest following a 14-hour, 1,200-kilometre bus ride. On Wednesday evening, the Black & Yellows will return to action in the Bundesliga when they welcome Sport-Union Neckarsulm to Halle Wellinghofen (19:30 CET).

Coach André Fuhr always gives his team a day off after returning from away games in the Champions League. An understandable decision, as the travel stress is extremely draining. On Monday, however, there were some things the players had to hear from their coach. “We absolutely have to analyse it; that’s a top priority now. It concerns our performance, which wasn’t good,” explained the coach, “even if the 31-25 margin of defeat was still quite okay”.

Fuhr felt his team had delivered an “error-strewn performance” in Brest. Even two days after the match, it was still fresh in the mind. “We made 20 mistakes – some of them hair-raising – and lost balls that shouldn’t have been lost,” said Fuhr, who is now faced with a balancing act: coming to terms with the defeat in Brest and at the same time preparing the team for Neckarsulm. They have to be on their guard: “If we perform like that, we could lose to Neckarsulm too,” said Fuhr, who went on to state that the performance against Thüringen in the first half had not been convincing either.

A defeat against Neckarsulm would indeed be a bad slip-up for the team currently second in the table: the two clubs have faced each other 15 times since 2013, with Neckarsulm winning only once. The South Germans took both points in Dortmund with a 32:29 win on 9 May 2015, but BVB have come out on top in the other 14 meetings.

Even though the Black & Yellows won the reverse fixture in Neckarsulm by a clear margin of 36-28, bottom-of-the-table Sport-Union still pose a threat and have some familiar faces in their ranks. Left winger Johanna Stockschläder was part of BVB’s title-winning team in the 21/22 season, while Spaniard Irene Espinola Perez played for BVB in the 2017/18 campaign before moving to Neckarsulm. She plays in a thoroughly effective back line alongside Dutchwoman Lynn Knippenborg. “Neckarsulm have good players and a large budget. And we know about their qualities, e.g. how fast Johanna Stockschläder is down the flank. We’ve had a hard time against Neckarsulm recently,” said André Fuhr.

Compared to the Champions League clash in Brest, there is at least one ray of hope on the personnel front: right winger Amelie Berger could be back after her injury layoff with adductor problems. Tina Abdulla, on the other hand, returned from France with shoulder pain. In other news, no decision has yet been made about the return of Alina Grijseels (lateral collateral ligament injury). “We take it day by day,” explained the coach.

But when it comes to preparation, André Fuhr has had to improvise. There are no current videos of the opposition, as Neckarsulm have only played nine games and have not been in action since losing 28-26 to Thüringen on 29 December. All subsequent matches have been cancelled due to corona cases.

Due to the current corona regulations, the 2G rule shall apply and a mask must be worn at your seat at Halle Wellinghofen on Wednesday evening. The match will also be broadcast live and free of charge on Sportdeutschland.TV.