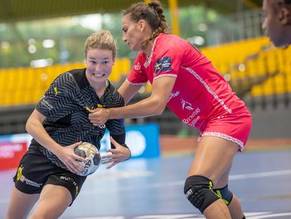 A break in these stressful days with three games in a very short time in the DHB Pokal, Bundesliga and Champions League? No, that’s not on the cards at the moment for Borussia Dortmund’s women’s handball team. Just one day after a hard-fought 32-27 victory in their Bundesliga top of the table clash against Thüringer HC, coach André Fuhr’s charges were already on their way to France. There, the third last EHF Champions League group match against Brest Bretagne Handball is scheduled for Saturday 5 February at 16:00 CET.

André Fuhr had enough time to review the top match on Wednesday evening against the third-placed team from Thuringia. He was satisfied with the fighting attitude of his team, which had been short of ideas in attack. The cup defeat in Bietigheim had not been banished from their minds as quickly as he would have liked. And yet, Fuhr was more than satisfied with his team’s performance: “It was a victory against the third-placed team, the top game in the league. And after all, we are now five points ahead of third place.”

In view of the critical personnel situation, the victory had to be rated even higher. Captain Alina Grijseels was sat in the stands with a ligament injury, Amelie Berger had to be taken off after only 15 minutes with adductor problems, Mia Zschocke looked to be carrying a knock and suffered a thumb injury during the game, but still scored four times beautifully from the back court. If things go badly, Mia Zschocke and Amelie Berger will both be ruled out for the game in France. Alina Grijseels will be in the squad, but she is doubtful after a long break.

Against THC, however, she was very well represented by Frida Rønning at the back. The Norwegian not only scored eleven times in the opponent’s goal, she was a leader on the court and seemed liberated. “Frida played an exceptional game, certainly her best for BVB. She showed patience, waited smartly,” André Fuhr praised the newcomer from Oslo, who is normally overshadowed by Alina Grijseels: “Her performance is all the more remarkable for that.”

The strain on the team these days is enormous. On Thursday evening, they travelled by night bus from Dortmund to Brest, arriving on Friday morning at 08:00 CET. Breakfast followed, a short walk, a few hours of sleep and a training session in the afternoon. Kick-off is at 16:00 CET on Saturday (live auf ehftv.com). “Brest are the clear favourites, we won the first leg, but the conditions were different,” explained Fuhr. For Brest, every point is precious, the French women are playing for second place in the group.

After the match in Brest, the Dortmund team will only have to play twice more in the Champions League before the start of the play-offs. On Sunday, 13 February, BVB face Buducnost BEMAX from Podgorica in Montenegro, and one week later, on Saturday, 19 February, they will play their last group match at FTC-Rail Cargo Hungaria in Budapest. The first leg of the play-offs follows on 26 March.