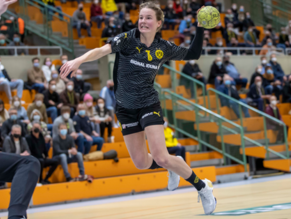 The Borussia Dortmund women’s handball team came out on top – albeit only narrowly – in an expectedly difficult clash with Sport-Union Neckarsulm. Although the side in second dominated up until the break in their 30-26 (18-14) victory, they were then rather careless with their attacking positioning and passing, and not overly consistent in defence.

Matchday 14 started off with some good news for the Black & Yellows: captain Alina Grijseels would be making her long-awaited comeback against Neckarsulmer Sportunion. She initially suffered a broken nose in the closing minutes of the cup quarter-final clash with Bietigheim at the start of January. Once that injury was more or less healed, she injured her lateral collateral ligament. All in all, the BVB captain was sidelined for over five weeks. Right winger Amelie Berger also returned against the southern Germans, having suffered an adductor injury in the Bundesliga top match against Thüringen, before being rested in Brest. Tina Abdulla, who tested positive for the coronavirus on Tuesday, missed out. “The rest of the team is negative,” said a visibly relieved Rupert Thiele, the deputy head of department.

Initially, though, captain Grijseels remained on the bench as Borussia coach André Fuhr kept with the formation that has at least proven successful in the Bundesliga recently. Neckarsulm, who had played their last Bundesliga match at the end of December and then endured a long enforced break due to numerous coronavirus cases, started brightly and led a nervous Dortmund team 4-3 by the 10th minute. BVB were visibly tired after the stressful Champions League weekend in Brest, France. After Frida Rønning had missed a penalty shortly afterwards, André Fuhr reacted swiftly.

The BVB coach was unhappy with the performance of his charges, though that could not be overheard from his comments from the sidelines. Alina Grijseels converted the next seven-metre penalty to make it 5-4, before Merel Freriks restored parity at 5-5 seconds later.

Nonetheless, it was clear that this was not going to be a walk in the park. A good thing, then, that Alina Grijseels proved to be a safe seven-metre thrower – although she was mostly used from the bench to begin with. With the score at 10-9 around the 20th minute, the BVB captain then was introduced permanently. The substitution injected more calm into the game. Once Grijseels had converted her fifth penalty in a row to take the score to 12-10, the floodgates seemed to open. Within a very short time, the Black & Yellows pulled into a 14-10 lead and went into the break 18-14 up.

In the second half, Neckarsulm battled against impending defeat. And things got tight again when Lynn Knippenborg from the Netherlands reduced the score to 21-19 after seven minutes of the second period. BVB’s defending was inconsistent; going forward there was weaknesses in their play – as has been the case in the previous games – especially in terms of passing, with a number of clear chances squandered too. “Guys, secure the ball, this mustn’t happen,” shouted Fuhr loudly in a bid to cut out the carelessness that was creeping in.

The Black & Yellows did not feel really safe at any stage. When Merel Freriks increased the lead to 27-24 in the 51st minute, the three-goal cushion was re-established. With the score at 29-26 with three minutes remaining, the match remained exciting and competitive. It was not until 30 seconds before the end that Amelie Berger relieved the onlooking fans by scoring to make it 30-26. “That wasn’t a good game; we’ll take the two points, we’ll have to talk about the rest,” said Borussia coach André Fuhr, who was not exactly pleased with his team’s performance.

The BVB women’s handball team are next in action on Sunday (16:00 CET) when they welcome ZRK Budocnost Podgorica to Helmut-Körnig-Halle in the Champions League.