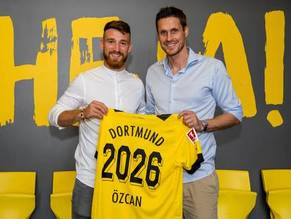 Özcan, who had several offers – both domestic and international – to choose from, has already completed a medical examination in Dortmund and penned a contract until 30 June 2026.

“Salih Özcan was one of the rising stars of this last Bundesliga season and made a key contribution to Cologne’s successful season in central defensive midfield. He is a player who is incredibly strong in the tackle and the air. Someone who is prepared to do the dirty work and is uncompromising in his bid to help his team succeed. His mentality and physicality, coupled with his intelligence, will do our team good,” said BVB’s sporting director in waiting Sebastian Kehl.

Born into a wrestling family living in Cologne, he progressed through all the German national team’s youth ranks from U15 onwards before then opting to represent Turkey – for whom he has already made his debut – at international level in March 2022. In 2017, the DFB awarded Özcan the Fritz Walter gold medal as the best German youth player in his year group. In 2020, he was a key player as the Germany U21s became European champions.

Salih Özcan said: “1. FC Cologne are my hometown club and I owe them a great deal. There are very few clubs I would’ve left my town for. Borussia Dortmund’s energy, which one can literally feel, plus the opportunity to play regularly in the Champions League, ultimately led me to my decision. I’m very happy to be able to continue my development at BVB in front of more than 81,000 spectators and to help the team in the Bundesliga and the Champions League with my style of football. I’m very ambitious and willing to give everything to this end.”