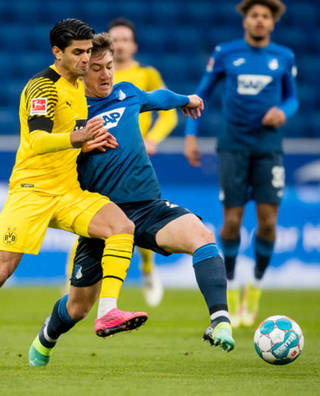 Borussia Dortmund kept up their winning form in the Bundesliga as they made it three victories from three since the winter break. BVB luckily ran out 3-2 (1-1) winners in their top clash with fourth-placed TSG Hoffenheim on Matchday 20.

Haaland scored in front of the permitted crowd of 500 to put Borussia 1-0 ahead early on (6), but Kramaric levelled at 1-1 in first-half-stoppage time. Reus re-established the BVB lead with their second opportunity of the match in the 58th minute, before Raum turned Malen’s dangerous crossed into his own net to give BVB a 3-1 lead on the 66-minute mark. It was the Dutchman’s third assist of the match! But only 11 minutes later, Rutter reduced Hoffenheim’s deficit to 3-2.

The scenario:
It was a meeting between two teams who had disappointed in the cup on Tuesday and Wednesday respectively. In the league, both teams had considerably more points than they did going into Matchday 20 last season (Hoffenheim +9, Dortmund +8). Hoffenheim had lost only one of their previous eight Bundesliga matches, while BVB had won three of their latest four league games and were unbeaten in three meetings with TSG (two wins and one draw).

Personnel matters:
Meunier (muscular problems) joined Can, Morey, Reyna and Schmelzer in the treatment room. The right-back was replaced by Wolf. Dahoud was fit again and replaced Witsel in the starting XI, while Malen returned to the line-up in place of Hazard.

Tactics:
As has been the case for every game this year, BVB started the mach in a 4-3-3 formation – with Haaland leading the line, flanked by Reus on the right flank and Malen on the left. Behind them was a midfield trio of Brandt and Bellingham either side of holding player Dahoud. TSG initially lined up in a 4-4-2 but quickly switched to a 3-4-2-1 formation. Prior to his premature substitution, Baumgartner played level with the two central defensive midfielders when BVB had possession of the ball. Kramaric mainly operated down the left, with Dabbur in the centre.

The match & analysis:
A Dortmund team that looked extremely focused in the opening minutes did not allow Hoffenheim, who were in excellent home form having taken 19 points out of a possible 21 from their previous seven games, any opportunities to score from open play until shortly before the break, with the home side struggling to mount any pressure despite having slightly more of the game (55% possession).

The Black & Yellows had taken an early lead following an excellent piece of link-up play that was initiated by Brandt’s pass down the left flank and followed up by some lovely combination play involving Bellingham and Malen. The latter played a one-two with Bellingham in the tightest of spaces in the box and picked out Haaland, who had an easy finish to tap home for 1-0 after five minutes.

Hoffenheim initially only threatened from set-pieces. Kobel made a sensational save to keep out a header from Rutter (11), who had only just come off the bench, before Richards had another good opportunity via a header which struck the crossbar (23). BVB appeared to have everything on the pitch under control, only for Rutter to latch on to a long pass in behind the defence and square the ball into the path of Kramaric. Akanji intervened brilliantly to deny the possible equaliser, however (41). But it did eventually come before the break: Bebou was allowed to deliver a cross from the right and the largely unchallenged Kramaric volleyed home from a centre-left position for 1-1 (45+1).

TSG initially looked the livelier side after the restart. Rutter, who was playing as a second striker alongside Dabbur, struck the side-netting (47). Rose reacted with a double-substitution and a change of system: Hazard and Zagadou came on in place of Wolf and Brandt (56); Zagadou, Hummels and Akanji formed the back three with Hazard and Guerreiro in the wide roles.

Two minutes later, Haaland let Hummels’ long ball run through to Malen, who immediately threaded the ball through to Reus. Capitalising on Hübner’s mistake, the midfielder went clean through on goal and slotted past Baumann to make it 2-1. Shortly afterwards, Haaland was forced off with an injury and was replaced by Witsel (63). Dortmund’s third scoring opportunity brought about the third goal: Malen, who was played in by Guerreiro, darted into the penalty area on the left and fizzed a low ball across the face of goal that Raum, under pressure from Hazard, turned into his own net (66). 3-1!

But Hoffenheim reduced the deficit to 3-2 11 minutes later. Rutter ran on to Dabbur’s pass and did not give Kobel a chance. TSG’s 14th shot brought them back into the game, but BVB subsequently managed to keep their hosts at arm’s length – until the 89th minute at least: the ball landed at Rudy’s feet, but the Hoffenheim substitute fired wide of the mark from around eight metres out.

Outlook:
There is now a break in the league calendar. BVB will resume their campaign at home to Bayer Leverkusen on 6 February.