Why does the Bundesliga’s worst team ever want to keep their record? ESPN’s Insider Notebook has the answer: PLUS: The handball law is changing.

As football fans in Germany watch the crisis at Schalke unfold, the Bundesliga strugglers have found unlikely friends from a fifth-tier club desperate for them to win a league match.

Make your Bundesliga and Serie A picks to compete for a chance to win ESPN+ for FREE! Make Your Picks

Schalke have not won in the Bundesliga for 24 games and are closing in on the all-time record set by Tasmania Berlin in 1966, when they went 31 without a victory. But while Schalke’s Bundesliga rivals can indulge in some schadenfreude, “Tas” don’t want to take pleasure in their demise. Quite the opposite — they even fear the day Schalke break their longstanding winless record.

– Bundesliga on ESPN+: Stream LIVE games and replays (U.S. only)
– ESPN+ viewer’s guide: Bundesliga, Serie A, MLS, FA Cup and more
– One kid’s mission to build every Bundesliga stadium out of Lego

“It’s been part of our identity for so long,” Almir Numic, the club’s executive director, told ESPN. “This record helps us. When we sit down with sponsors, we don’t have to explain who Tas are. The first thing you see on Sportschau [a popular German football highlights show] every year is our crest. That’s just cool. It’s become part of what we are.”

Numic, a 38-year-old businessman, took control of Tasmania earlier this year and hopes the team can perhaps one day get closer to a return to the Bundesliga, with the club top of their regional league after nine matches.

“It’s not about the money,” he said. “It’s about identification, about emotions. And those players here, they are aware of it.

“It would not work if we were to pay one player €200 and the other €3,000. We will continue to invest, but not overpay players. We are not anywhere the highest budget in this league. But we top it.”

With the league interrupted due to the ongoing restrictions caused by the coronavirus, Numic recalled a moment when the team hosted local rivals SFC Stern with the backing of their fans.

He said: “We played this match, and the stadium was packed. That day, an old man with a crutch came up to me and asked: ‘Do you know who I am?’ and I said: ‘No, sir.’ I am a young guy. It turned out it was the Tasmania keeper from the Bundesliga days. They are all coming back.”

Over half a century from setting the all-time Bundesliga record, Tasmania are desperate for Schalke not to erase their name from history books.

“My friend Souleyman Sane, Leroy Sane‘s dad, told me that Tasmania are a sleeping giant. And, indeed, that record is part of our history, our identity. We sell merchandise all over the world because of it. Only recently, we sent a package to Norway. Those following football in Berlin can see that the giant is waking up,” Numic added. — Stephan Uersfeld

Handball has caused huge controversy across the top European leagues over the past year, with players and managers aghast at many of penalties that have been awarded. The number of spot kicks awarded for handball has risen sharply since the rules were changed in 2019 — but now lawmakers could be ready to make a key change.

– Handball: How penalties have surged in top leagues

The advisory panels of the IFAB (International Football Association Board) met on Monday, and sources told ESPN the handball by Eric Dier, which gave Newcastle United an injury-time equaliser in the 1-1 draw at Tottenham and led to huge controversy on Sept. 27, may no longer be considered a mandatory penalty.

At present, handball is an automatic offence when the arm is above the shoulder. Sources said the proposed clarification in the 2021-22 laws would make it clear when the hand/arm is close to the face for protection or part of the natural movement, contact should not be penalised. That means that a referee would have leeway on the Dier handball, to consider that it was part of his natural body position when jumping.

However, handballs such as the one given against Sheffield United’s Jack Robinson in the 1-1 draw against Fulham on Oct. 18, when his arm was stretched above his head, would still be a penalty.

Other clarifications will centre on misunderstanding and misapplication of the law, allowing the referee to “judge the position of the hand/arm in relation to the player’s movement in that phase of play.”

The Premier League moved to this interpretation at the end of September, so we should not expect it to be repealed to its former version, where handball had to be a deliberate act. So, this isn’t the end to the controversy but a confusing law should be better explained.

Sources said that the advisory panels did not consider any clarification relating to a deflection off the body onto the arm, which led to Stade Rennes‘ Dalbert conceding a penalty and receiving a second yellow card at Chelsea.

The Annual Business Meeting of the IFAB takes place on Dec. 16, when the advisory panels’ recommendations will be considered. — Dale Johnson

Gab Marcotti hopes teams can adapt to the new handball rule seen in the Premier League this season.

Barcelona will struggle to compete in transfer market

Barcelona will not be able to compete with the top European clubs in the summer transfer market due to their financial struggles, sources told ESPN.

The club will have a new president on Jan. 24 but most candidates are not expected to try to convince fans to vote for them by offering big names as potential signings, as they have done in the past. In 2003, Joan Laporta won the election after announcing a deal with Manchester United for David Beckham — although in the end they signed Ronaldinho from Paris Saint-Germain instead, as Real Madrid signed Beckham from United. 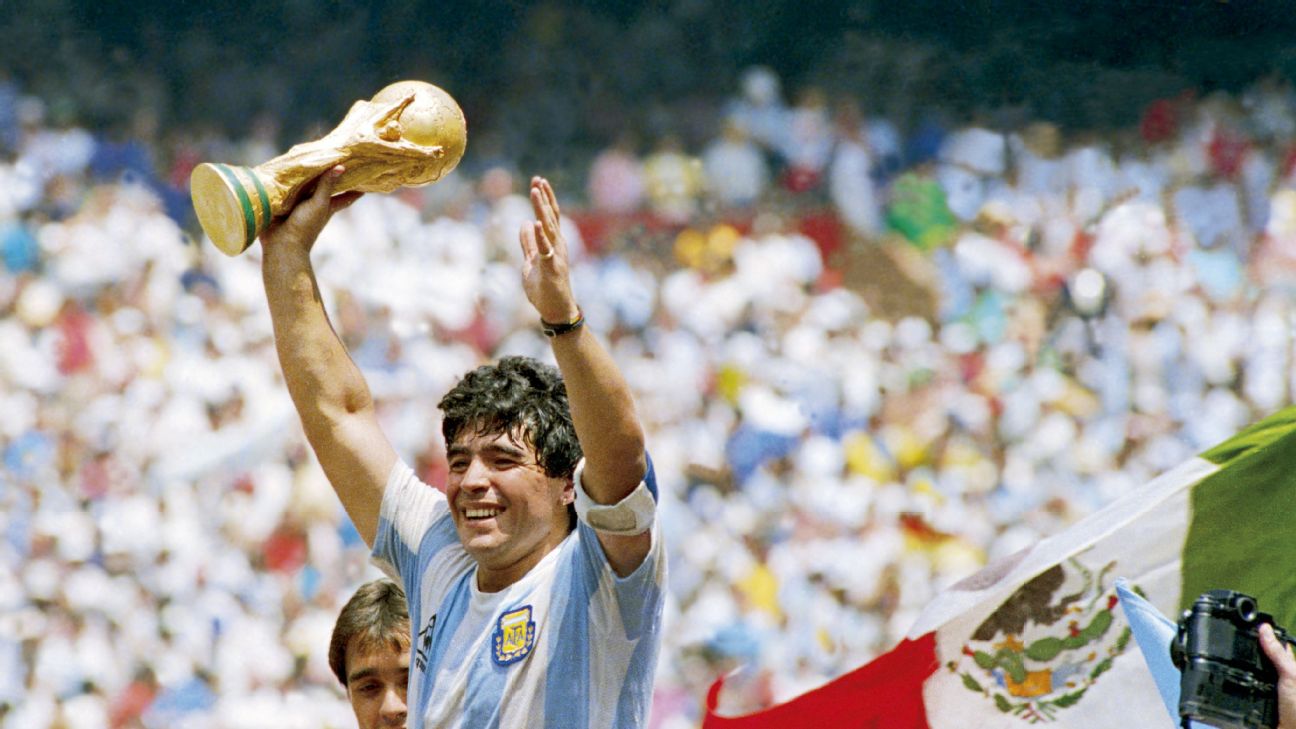 One hopeful, Emili Rousaud, has claimed he will go for Neymar and another big star if he wins the election but sources told ESPN that it will be difficult for Rousaud, Laporta or any of the other candidates to make big promises of signings due to the financial problems at the club.

Barcelona tried to sign Lautaro Martinez from Inter Milan last summer and considered re-signing Neymar from PSG before the coronavirus pandemic struck. The club had to give up on both signings and sources said next summer will be similar, with Barca unable to make any big moves in the market despite the arrival of a new president.

Club sporting director Ramon Planes is working on the search for low-cost players, although the future president will have the final say on any transfers. Barcelona will not be able to enter into battles with the big European clubs and they are looking for players who will become free agents in the summer, or young talents who won’t require a big outlay. Manchester City centre-back Eric Garcia meets both requirements and will once again be a target. It remains to be seen whether Barcelona try to convince Pep Guardiola’s side with a new offer in the January window or if they will wait until the summer to sign Garcia as free agent.

Since the COVID-19 pandemic began, revenues have fallen dramatically at Barcelona. The club announced losses of €97m for the 2019-20 season in October and confirmed that their total debt has doubled to €488m. The latest accounts revealed a total income of €855m, down over €200m on the €1,059m they predicted they would have brought in without the coronavirus outbreak. That would have led to profits of around €30m.

Among other losses, Barca explained that they lost €47m in matchday revenue, €35m in sales at the club shops and €18m in ticketing from the museum based at Camp Nou.

The club had to make a salary cut to players and employees in March and are negotiating further reductions to salaries. — Sam Marsden and Moises Llorens

Sid Lowe examines the possibility Barca fail to finish top four in La Liga amid their worst start since 1991.

Manchester United are prioritising the right side of Ole Gunnar Solskjaer’s team for strengthening in the next two transfer windows in order to address the shortcomings in Aaron Wan-Bissaka‘s game at right-back.

The 23-year-old has made a positive impact on the United defence since arriving from Crystal Palace in 2019 by providing defensive reliability. But Wan-Bissaka’s lack of progress in developing the attacking side of his game has left United concerned by the threat levels posed to opponents in the attacking areas of the pitch.

United and Solskjaer have been searching for a right winger and attacking right midfielder for over 12 months, with Borussia Dortmund‘s England forward Jadon Sancho a long-term target. Attempts to sign Sancho during the summer window proved frustratingly unsuccessful for Solskjaer who believes that United’s lack of cutting edge down the right is having a detrimental effect on his team.

Wan-Bissaka has been encouraged to compensate for the absence of a right winger by being more adventurous down his side of the pitch, but his distribution and attacking qualities remain unconvincing.

United believe that serious competition for his place at right-back will accelerate an improvement in Wan-Bissaka’s game, but a move for an attacking player is also a priority.– Mark Ogden

Craig Burley struggles to see Manchester United getting another win against RB Leipzig, especially in Germany.

The untimely death of Diego Maradona this week has prompted many recollections of the game in which he delivered the defining images of his career – the infamous Hand of God goal and stunning individual effort moments later during the World Cup quarterfinal win against England in Mexico City in 1986.

Memories of that game have also served as a reminder of how one of the most storied rivalries in international football has been in cold storage since the two nations last met in a friendly in Geneva in November 2005.

England vs. Argentina has generated iconic images in World Cups dating back to 1966, including moments such as Maradona’s goals in 1986, Michael Owen’s wonder goal and David Beckham’s red card for kicking Diego Simeone in 1998 and Beckham’s redemption four years later, when his penalty in Japan sealed a 1-0 win in Sapporo.

England have hosted every major nation in world football at least once during the past decade, but sources have told ESPN that efforts to negotiate a friendly date with Argentina have always proved unsuccessful.

Argentina have not played England at Wembley since 2000, while the last meeting between the two nations in Argentina was back in 1977.

Sources have said, however, that the availability of both teams at the same time, and the complexities of striking an agreement with associations from different confederations, have been a factor in the failure of the English and Argentina FAs being unable to fix a date to renew their rivalry.

And with England having only two non-competitive dates available before next summer’s rescheduled Euro 2020, the prospects of a clash with Argentina are unlikely to come to fruition in 2021. — Mark Ogden