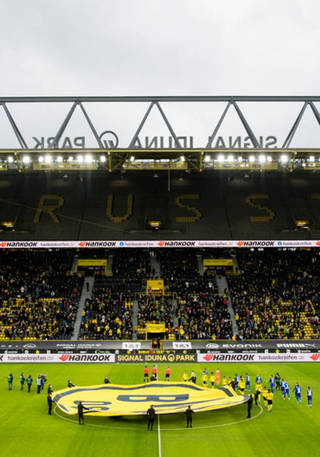 Borussia Dortmund lost their top match with Bayer Leverkusen on Matchday 21 of the Bundesliga season. BVB were beaten 5-2 (3-1) but remain in second with a five-point lead over their third-placed opponents.

With the maximum permitted crowd of 10,000 watching on, Borussia fell 3-1 behind in the opening 27 minutes and could not turn the match around after the interval as Leverkusen exacted revenge for their 4-3 defeat in the reverse fixture. Tigges pulled a goal back late on to reduce the deficit to 5-2.

The scenario:
This was a meeting between the best home team and the second-best away side. Borussia Dortmund had won each of their previous six home games against Bayer Leverkusen, scoring at least three goals on each occasion.

Personnel matters:
Haaland joined Can, Morey and Schmelzer on the absentee list, while Hummels was only fit enough for the bench. Reyna played for the first time since Matchday 3. There were three changes to the starting line-up from the Hoffenheim game, with Meunier, Zagadou and Hazard replacing Wolf, Hummels and Haaland.

Tactics:
BVB stuck with their 4-3-3 formation, with Malen spearheading the attack. When Dortmund had possession, Leverkusen adopted a 4-4-2 formation and attacked with great versatility with Diaby, Schick and Wirtz frequently level alongside each other.

The match & analysis:
Borussia twice created danger in front of the Leverkusen goal after winning the ball back high up the pitch in the opening stages, but did not manage to get a shot away due to a lack of accuracy on the final ball. A misplaced pass deep in their own half saw them fall behind early on: Kobel parried Schick’s shot from 16 metres out but he couldn’t hold onto it and the loose ball ricocheted off Akanji and into the net (10).

The opener was swiftly followed by an own goal at the other end, with the game once again all square after Frimpong had headed Brandt’s free-kick from the right into his own net (16). But then BVB were hit on the counter-attack. After regaining possession on the edge of their own box, Bayer countered at lightning speed with left-back Bakker playing a through-ball towards the centre-circle. Diaby laid it back to Schick, whose ball into the path of the onrushing Bellarabi was then forwarded for Wirtz to fire into the far corner from eight metres out (20). The visitors launched another counter shortly afterwards that culminated in Dahoud bringing down Schick just outside the box. Following lengthy discussions about the distance, Andrich Maß stepped up and fired the ball under the wall and into the Dortmund net to make it 3-1 (28). BVB subsequently looked rather unsure of themselves and although they battled hard, they were not able to pull a goal back before the interval and put themselves in a better position heading into the second half. Kobel even denied Bakker a possible fourth on the stroke of half-time (44).

The conditions remained windy and rainy in the second half, after five minutes of which Grill intervened to deny a long-range effort from Brandt. With the support of their fans behind them, BVB battled their way back into the game. But rather than mounting a comeback, they then conceded a goal from a corner that never was – though the referee did not spot that – as Tah made it 4-1 (53).

That goal killed the match as a contest, although the Black & Yellows persisted with damage limitations. But most of their attacks went through the middle of the pitch and were closed down. They did find a way through on 80 minutes when Reyna latched on to a through-ball, though he was denied by Grill. Diaby headed home Frimpong’s cross on the counter to make it 5-1 (88), before Tigges slotted home Moukoko’s pass at the other end for 5-2 (89).

Outlook:
Before the “English weeks” get under way, BVB have one more full week of training ahead. Their next match is away to Union Berlin next Sunday (15:30 CET).