As Ozil leaves Arsenal, Aubameyang and Lacazette have already decided who inherits his No. 10 shirt

After seven-and-a-half years, Mesut Ozil’s time as an Arsenal player is coming to an end after the exiled midfielder struck a verbal agreement to cancel the remainder of his contract with the north London club in order to sign for Fenerbahce.

Ozil is now on the cusp of completing a free transfer to the Turkish club, and he flew out to Istanbul with his family at the weekend in order to finalise the move.

As word of his impending transfer began to circulate, the German changed the colour scheme of his social media channels from the red-and-white of Arsenal to the yellow-and-blue of his prospective new employers.

And thus, 10 months since his last competitive appearance for the Gunners, the Ozil impasse looks to have finally been settled.

“Our club is bringing Mesut Ozil to Istanbul to continue the transfer processes,” Fenerbahce confirmed on social media, sharing a photo of their new player touching down at the airport.

Ozil himself also stated that he is “very excited” to be joining the club he has supported since childhood, though added that he is likely to miss the first few games as he recovers his match fitness.

The 32-year-old arrived at Arsenal as a marquee signing from Real Madrid in September 2013 in a transfer worth close to £42.5 million.He went on to make 254 appearances, score 44 goals and provide 77 assists while playing his part in three FA Cup wins for the club and also helping Germany win the World Cup in 2014. And yet, somehow, he still managed to end up frozen out of both Mikel Arteta’s Premier League and Europa League squads in 2020. It’s been an erratic stint, to say the least.

Back in north London, before Ozil had even put pen to paper on a contract at Fenerbahce, his former teammates at the Emirates were already squabbling on social media over who should claim his soon-to-be-vacant No.10 shirt. Strike partners Pierre-Emerick Aubameyang (who currently wears the No.14 shirt) and Alexandre Lacazette (No.9) shared a joke on Instagram as they tussled for Ozil’s squad number.

Lacazette posted a picture on his story of him training with his close friend above the “Spider-Man pointing at Spider-Man” meme and the caption: “When you both want the number 10.”

Aubameyang replied: “They said they put it away… all yours my bro.”

Lacazette then sought to assure Ozil that he would do the number proud by adding him to say: “It will be in good care.” 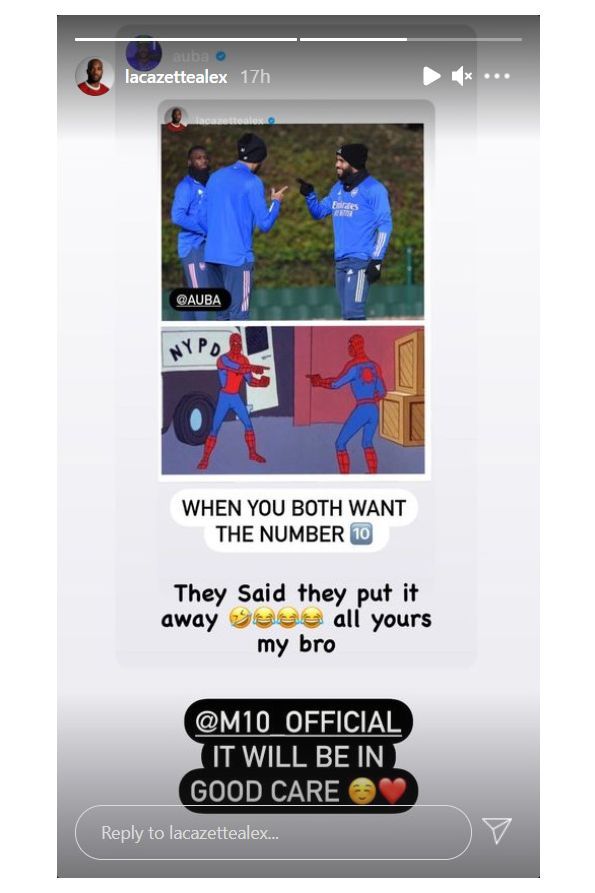 Ozil’s legacy at Arsenal has been the subject of much discussion over the past year, most of which he has spent reduced to watching his team play on TV from the comfort of his couch.

While at his peak he was one of the world’s top creative midfielders, the latter part of his Arsenal career featured far too many big games in which he was of little influence on the team, and his club-record £350,000-a-week wage became symbolic of the mismanagement at the club in the post-Arsene Wenger era.

Still, that hasn’t prevented Fener fans from getting excited, with over a quarter of a million people eagerly following Ozil’s private flight from London to Istanbul on Sunday.

It’s unfortunate then that, due to coronavirus restrictions, Ozil couldn’t be granted the kind of huge welcome celebration that Turkish football fans have become famous for in recent years. As far as riotous arrival lounge fanfares for high-profile foreign signings go, the latest was distinctly tame.

Still, we’re sure there will be plenty of time for chanting, drums, fireworks and good old-fashioned adoration as soon as Ozil is up and running again in his beloved yellow-and-blue kit.