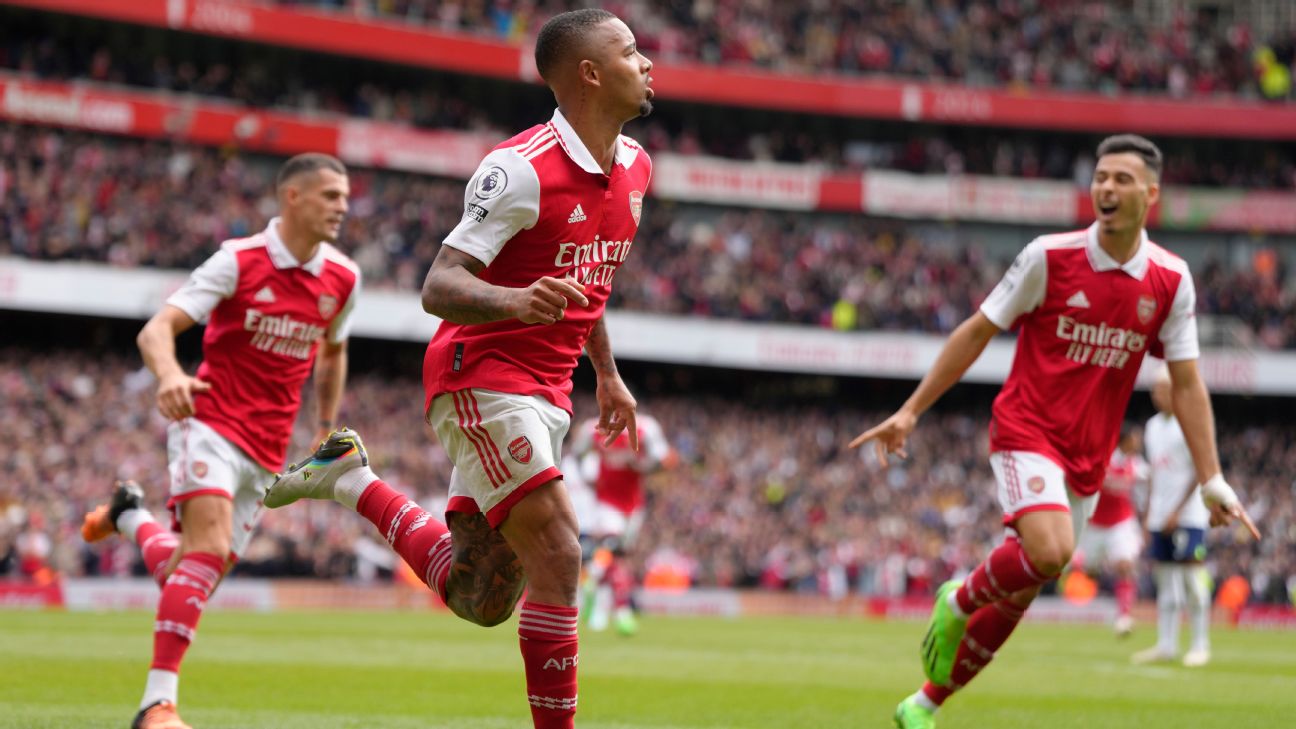 LONDON — Arsenal made it look easy in the North London derby, running out 3-1 winners against arch-rivals Tottenham Hotspur.

The Gunners took the lead in the 20th minute through a superb Thomas Partey long-range strike, but Spurs were handed a way back into the game nine minutes later when Gabriel brought down Richarlison and Harry Kane made no mistake from the penalty spot.

Arsenal came back out after the break full of running and were rewarded for that in the 49th minute as Gabriel Jesus pounced on a Hugo Lloris error.

Tottenham’s hopes of getting back into the game were ruined when Emerson Royal was sent off for a challenge on Gabriel Martinelli just after the hour, and soon afterwards Granit Xhaka wrapped up the points.

Tottenham beat Arsenal 3-0 in May in a result which went a long way to ensuring Spurs pipped their north London rivals for a Champions League spot, but the Gunners gained a measure of revenge on Saturday with a commanding win at Emirates Stadium.

In doing so, Arsenal extended their stay at the top of the Premier League and struck an early blow in the race between these sides to prove they are ready to challenge Liverpool and Manchester City for the title. For the most part, they also avoided the same mistakes as when losing at Manchester United in a similar sort of game. They controlled the match for long periods but lost to goals on the counter-attack at Old Trafford whereas here, they were able to dictate terms for longer spells against Spurs and thoroughly deserved the win.

The pattern of this game was predictable from the outset: Arsenal would dominate possession and territory while Spurs would aim to stay compact, soak up pressure and hit on the break. Tottenham have won multiple matches without playing well this season, staying in games before their attacking talent comes to the fore, and it appeared for a while that would be the case here as Arsenal dominated the opening half an hour before a rare breakaway saw Gabriel bring down Richarlison in the box. Kane converted from the spot but individual errors were Tottenham’s undoing.

Lloris made two mistakes in a matter of seconds, pushing Bukayo Saka’s tame 49th-minute shot straight out in front of him and then allowing the loose ball to squirm under him as Clement Lenglet struggled to clear, allowing Jesus a tap-in. And then Royal was dismissed for a poor tackle on Martinelli — more foolish than malicious — giving Arsenal the numerical advantage to see this out comfortably. Regardless, Spurs may regret not being a little more adventurous earlier on.

Kane notches another personal milestone but are Spurs progressing enough?

It will come as little comfort to Kane given the result but he became the first player ever to score 100 away goals in the Premier League with a 31st-minute penalty which drew Spurs level in the first half. He also extended a fine individual record against Arsenal, moving to 14 goals in 16 Premier League games — half of those goals have been penalties. This was, however, one of those days where the distance between Kane’s personal achievements and the prospects of Tottenham as a club feel uncomfortably far apart.

The 29-year-old wants silverware now. He sought a move to Manchester City in pursuit of trophies last summer but there was little talk of leaving this year as Pep Guardiola’s side signed Erling Haaland instead while Spurs had taken significant strides forward under Conte. That progress has to continue otherwise speculation will quickly resurface over whether an ambitious striker already proven as one of the Premier League’s finest can really achieve his ultimate aims at Tottenham — and links with Bayern Munich persist.

Finally scored from outside the box at the 65th attempt but his all-round play enabled Arsenal to exert a high level of control: 52 passes completed from 55 attempted before his 73rd-minute substitution.

Sent off for an idiotic challenge on Martinelli and having been fortunate to play so often this season he let his teammates down in a big game.

“The players grabbed the game and deserved to win the it,” Arteta said. “It was the whole team — starting from the back to front. They really connected today.

“I hope this will give them more belief that they can win at this level in the way we want them to play. We have connected with our supporters and when that happens it is a really powerful thing.

“We have a really meaningful opportunity to give a lot of people happiness on a beautiful day and we have delivered that and it is a really great feeling. We are focusing on what we are doing. This is a sign that we are going in the right direction. We need to maintain that now and go for it.

“You feel the desire and humility — they haven’t won anything yet and that is important to have that humility, which is a big driver for us.”

“I think the first half was in the balance, we had many chances to score,” Conte said. “We made a big mistake with the last pass because we had great space. In the second half we conceded a second goal early and we could do much better.

“With the the red card, [went] the game. It was a really difficult game after that. We had to change totally then. It was the referee’s decision and I don’t want to comment.

“We had the opportunity to exploit much better and stay up and I repeat that I think we made big mistakes in the last pass and with easy passes but it happens and straight after the national team it is a bit difficult because players arrive at a different time.

“Now we have to move on but we know our role in this league and we have to try and do our best to stay close to the other teams at the top. I tried to give minutes to players because the game had ended and also to try and save energy.

“I wanted to give players time especially [Oliver] Skipp and [Matt] Doherty because we need the whole squad because we have many games in front of us in a short period.”

Arsenal’s 12-game unbeaten streak vs Spurs at home in the Premier League is the longest such streak since a run of 17 between 1993 and 2010.

Tottenham have just won twice at Arsenal in the Premier League era, stretching back to 1992.

Emerson Royal’s red card was the fifth red card Tottenham have received at Emirates Stadium in the Premier League, the team’s most red cards at a single venue in the competition.

Arsenal: It’s back to the Europa League for Arsenal, who will play their second group-stage game having seen their match at home to PSV Eindhoven postponed. The Gunners will host ambitious Norwegian outfit Bodo/Glimt on Thursday before facing another test of their improvement in the Premier League when Liverpool visit the Emirates on Sunday.

Tottenham: Conte will take his Spurs squad to Germany on Tuesday to face Eintracht Frankfurt in the Champions League. And another away game follows that as Tottenham make the short trip to the south coast to take on Brighton on Saturday.