"Always be serious, always be focused" 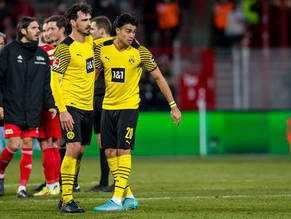 Five matches, four victories. BVB’s Bundesliga record in 2022 has been outstanding, with the heavy defeat to Leverkusen the only blot on their copybook. They have scored at least two goals in each of their five games and yesterday in Berlin they kept a clean sheet for only the third time all season.

There was no getting carried away after the 3-0 away victory against 1. FC Union Berlin. “But” was an oft-cited word in the post-match interviews. There was talk of “stability”, of a desire to finally inject some consistency into their performances in a season in which the points-per-game average is exceptionally good but in which the big defeat to Leverkusen a week ago and their eliminations from the Champions League and DFB-Pokal are still making themselves felt.

In any round of matches where Bayern Munich lose and Borussia Dortmund win, the media of course asks what “impact” this has “on the table”. Mats Hummels was simply “happy that we were able to establish a huge lead over fifth place”. That cushion stands at 12 points, while the gap to first place is six points. Hummels pulled no punches: “In order to compete with Bayern Munich, we have to show a lot more on the pitch. Always be serious, always be focused, always be ready to embrace the battles. Then at some point you can dream.”

In any case, the tactical approach with two holding midfielders made for stability. Whether with a four-man or three-man defence, this has proven successful in five out of seven league games. The positioning of Marco Reus seems to be just as important as the defensive protection. “The more central he is in front of goal, the better for us,” Hummels said in reference to the captain and scorer of two goals, who was once against deployed centrally in the modified 4-3-3 formation. “Marco’s biggest strengths are in and around the penalty area. The No. 10 is the position where he shines,” Hummels stressed, “with runs in behind, final balls and finishes. He also has some special moments in counter-pressing and can help us fantastically – like he did today!”

Marco Rose is also aware of the captain’s strengths: “He’s more of a central player. From there he is able to supply his team-mates and can pose a goal threat himself. His role is more that of a No. 10, where he can work in the half-spaces and attack the goal.” Reus notched his 21st brace in the Bundesliga to give his team a 2-0 advantage. “I got very lucky for the first goal,” he explained. Because Mo Dahoud prodded the ball back into his path after he had lost it. “That has been missing a bit for us and for me personally in recent weeks. Today we earned it.”
Boris Rupert